Max Scherzer didn't allow a run in 7 2/3 innings, springing the Tigers to their seventh consecutive victory.

The Tigers continued their winning ways tonight, beating the White Sox 3-0 behind three solo home runs off Sox starter John Danks. Max Scherzer picked up his 16th win of the season. He allowed just three hits in 7 2/3 innings. Danks took the loss for Chicago, his ninth of the year. Joaquin Benoit pitched a scoreless ninth inning for his 12th save.

The Tigers offense wasn't quite as potent as the last time they faced Danks, racking up six hits in seven innings. However, three of those hits left the ballpark. Torii Hunter, Jhonny Peralta, and Jose Iglesias all hit solo home runs to provide plenty of support for Scherzer.

Other than the homers, neither team was particularly threatening at the plate. The Tigers only had one runner in scoring position all night, when Ramon Santiago and Austin Jackson both singled with two outs in the bottom of the second. Danks got Hunter to pop out, ending the threat.

The White Sox threatened in the top of the third, drawing a pair of walks from Scherzer. Alex Rios popped out to end the threat. Rios was the only player for either team to reach third base, doing so in the ninth inning. However, Benoit got Conor Gillaspie to fly out to deep center to end the threat and the game.

With the victory, the Tigers move to a season-high 18 games over .500 at 63-45. They are currently 3 1/2 games ahead of the Cleveland Indians, who lead the Miami Marlins 4-2 in the 8th inning. The Kansas City Royals beat the New York Mets this afternoon, and are 7 1/2 games out of first.

Thanks to the BYB meet-up, tonight's game featured the third-highest attendance total at Comerica Park this season.

We're not yet sure if this fan is affiliated with our meet-up, but he might be able to play second base.

Jose Iglesias homered in the fourth inning to give the Tigers a 3-0 lead. The fanbase is understandably smitten with the newest member of the Tigers.

Um, the boy Iglasias can wear the #1 if he wants to.

He still looks a little young, though.

The BYB meet-up tonight, but that didn't stop our staff members from reporting the cold hard facts.

Advanced defensive metrics haven't been so kind to Austin Jackson this season, but Jackson showed the Tigers faithful that nothing is amiss with a pair of nice catches in deep center field in the eighth inning. Jackson ranged to both right and left center for the first two outs of the inning, taking away extra base hits from Gordon Beckham and Jordan Danks.

Jose Veras came on to get the final out of the eighth inning. On his first pitch, he threw quite the nasty curveball to Alexei Ramirez. 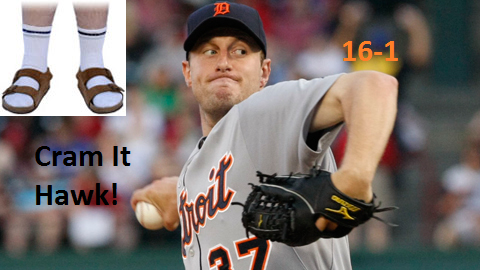 Jose Iglesias: Iggy showed some pop last night, hitting a deep fly ball to left field. It would have cleared the Green Monster, but it fell shy of the warning track. Tonight, Iggy left no doubt, clearing the bullpen for a solo homer in the fourth inning. His homer was the third of the game, giving the fanbase free curly fries tomorrow.

Jhonny Peralta and Torii Hunter: A homer each for Jhonny and Torii.

Victor Martinez and Alex Avila: Both were red-hot in July, but they combined to go 0-for-7 tonight.

Facebook fans: The Tigers official Facebook page was quite the dumpster fire this evening due to the Fiesta Tigres celebration and alternate uniforms. We won't go into specifics, but it was ugly.

While Jose Iglesias had an RBI single in his debut, he barely registered a blip on the radar of the BYB commentariat. Doug Fister carried 91% of the vote thanks to a stellar outing.