The Tigers continued their winning ways this week, sweeping the Washington Nationals and Chicago White Sox to close out a perfect homestand.

It was a big week in Tigers land, highlighted by a couple of key trades and a long winning streak. The Tigers won all five of their games while allowing just five runs, and filled a couple of major holes by acquiring reliever Jose Veras and shortstop Jose Iglesias from the Houston Astros and Boston Red Sox, respectively.

The Tigers had an off day Monday, but that just gave "Trader Dave" Dombrowski an opportunity to acquire Veras from the Astros. The Tigers sent outfield prospect Danry Vasquez and a player to be named later to Houston in exchange for the Dominican right-hander.

On Tuesday, the Washington Nationals came to town for a short two game series. Despite a disappointing season, the Tigers were scheduled to face aces Stephen Strasburg and Gio Gonzalez. Strasburg pitched well for six innings, but Alex Avila hit a two-out grand slam to break open a 1-1 deadlock en route to a 5-1 Tigers win. On Wednesday, the Tigers shellacked Gonzalez, scoring 10 runs in the first four innings against the left-hander. 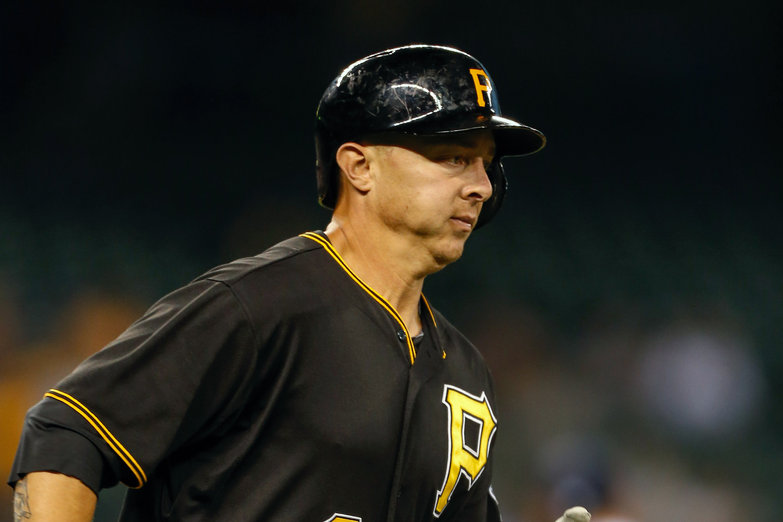 Al and Kurt get self-righteous over PEDs, ponder the Tigers' contingency plans and talk Jose Veras on this week's Bless You Boys Podcast.

Meanwhile, Dombrowski wasn't done wheeling and dealing. Shortly after Tuesday's game, the Tigers announced that they had traded outfielder Avisail Garcia and relief pitcher Brayan Villarreal to the Boston Red Sox in exchange for shortstop Jose Iglesias. The Red Sox then shipped Garcia and some of their own prospects to the Chicago White Sox for Jake Peavy.

Iglesias did not report to the Tigers until after the Nationals series was over, setting up his Tigers debut for a Friday night showdown with the White Sox. Iglesias was originally scheduled to play second base, but he was moved over to third base when Miguel Cabrera was a late scratch. Cabrera, who has been battling a hip injury, re-tweaked his injury on Tuesday.

While Iglesias played well over the weekend -- he drove in a run on Friday and homered to deep left field on Saturday -- starters Doug Fister and Max Scherzer stole the show. Fister tossed eight sparkling innings, allowing one run and throwing just 88 pitches before being lifted for Joaquin Benoit on Friday night. Benoit locked down the save, his 11th of the year, in a 2-1 win. Scherzer threw 7 2/3 innings of shutout ball on Saturday night, allowing just three hits. Solo homers from Iglesias, Torii Hunter, and Jhonny Peralta were more than enough for the Tigers to take home a 3-0 victory.

On Sunday, Rick Porcello and White Sox rookie Andre Rienzo went toe-to-toe for seven-plus innings. Porcello allowed one run on a solo homer from Adam Dunn, while Rienzo was charged with a pair of runs in the seventh inning thanks to an Avila RBI double and a sacrifice fly off the bat of Ramon Santiago. Drew Smyly -- who got the final out of the eighth inning -- allowed a solo homer to Paul Konerko in the ninth, tying the game at 2-2. The Tigers would not be denied though. After Cabrera singled to lead off the 12th, Hunter drove home pinch runner Matt Tuiasosopo to give the Tigers a 3-2 win and 8-0 homestand sweep.

Batter of the week: Alex Avila

Avila broke out of a season-long slump by hitting .269/.355/.463 in July with three home runs and 19 RBI. He capped off his big month by hitting .286/.375/.786 this week with three extra base hits and 7 RBI. He was clutch too, as the kids say. His grand slam turned a tight game into a sure Tigers win on Tuesday, and he hit an RBI double to put the Tigers on the board on Sunday. Torii Hunter also deserves a mention for hitting .338/.368/.789 and driving in the winning run on Sunday afternoon.

Pitcher of the week: Jose Veras

It's too difficult to distinguish between the Tigers' five starters -- though Doug Fister's outing on Friday night deserves a mention -- so we'll go with the newest member of the Tigers pitching staff. Veras had his hand in three Tigers victories this week, tossing 3 1/3 scoreless innings. He threw two scoreless innings in relief in yesterday's extra innings win, and gave us this gem of a GIF on Saturday night. 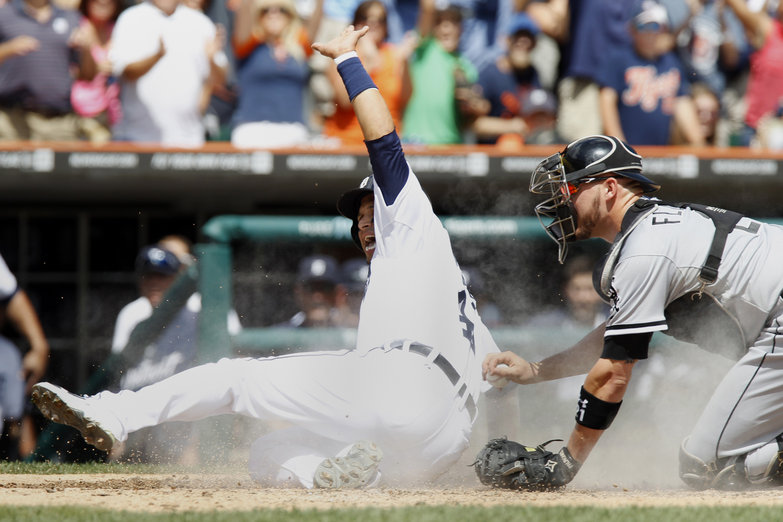 Torii Hunter hit an RBI single to deliver a 3-2 walkoff win in 12 innings on Sunday afternoon.

The Tigers will head to Cleveland tomorrow to start a big four game series with the second place Indians. The Tigers are three games up, and will have at least a share of the division lead when they leave town as long as they are not swept. The Indians may try to downplay the importance of this series, but Terry Francona's decision to start rookie Danny Salazar over Ubaldo Jimenez because of Jimenez's poor outings against the Tigers this season indicates that they are hoping from a big return in the next four days.

After the series in Cleveland, the Tigers head to New York for their only series at Yankee Stadium of 2013. They have played sub-.500 ball since the All-Star Break, going 6-8 against the Red Sox, Rangers, Rays, and Padres. Their offensive woes have been well publicized, and there's no telling what kind of media circus could be surrounding the club if the Biogenesis suspensions are announced this week.

The Toledo Mud Hens had a rough week, winning just two of seven games. They only scored 26 runs in those seven games, failing to capitalize on a good week from the pitching staff. They are 50-67 overall, 16 games out of first place.

Double-A Erie fared slightly better, going 3-4 on the week. They outscored their opponents 41-39, but were unable to win a couple of close games. See, even the Tigers' minor league affiliates underperform their pythagorean win percentage.

High-A Lakeland had a couple games rained out -- what else is new? -- but still went 3-2. They are 18-18 in the second half of their season, four games out of first place.

Low-A West Michigan went 4-2 on the week thanks to a pitching staff that allowed a 3.06 ERA. They are 21-19 in the second half of their season.