Ryan Raburn pitched an inning of relief for the Cleveland Indians this evening. Here is an exclusive scouting report of Raburn's repertoire and big league upside.

Ryan Raburn made his major league pitching debut this evening, pitching a 1-2-3 inning for the Tribe at the tail end of a 10-2 10-3 loss (thanks a lot, Phil Coke).

According to Brooks Baseball, Raburn's repertoire consists of a fastball, sinker, and changeup. This is a load of crap, but we're going to work with it. Raburn's fastball averaged 88.1 miles per hour tonight with a top speed of 89.5 miles per hour. Here is a GIF of Raburn throwing a strike. Brooks probably classified it as a sinker.

Raburn has an easy, repeatable delivery that places a low amount of stress on his body. While it decreases his injury risk, the lack of follow through limits his velocity and can lead to him leaving the ball up in the strike zone too often, like he did this evening. 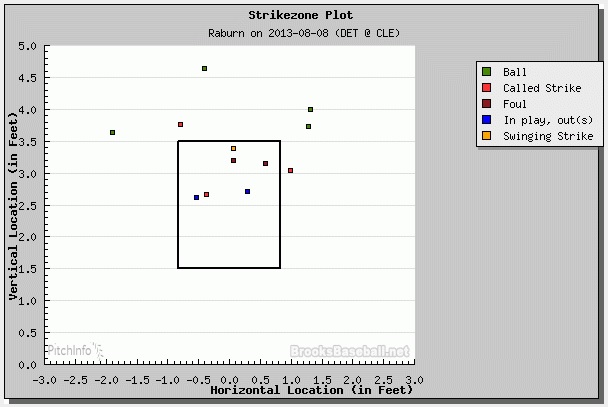 If Raburn develops his follow through, he could feasibly reach the lower 90s with his fastball and would have a better command of the strike zone. Of course, he's also done stuff like this in his career so it's probably not best to put too much on his plate at once.

As mentioned before, Brooks Baseball classifies Raburn's arsenal into three pitches. He was able to reach back for 89.5 miles per hour in order to strike out Matt Tuiasosopo, but otherwise sat around 88 miles per hour with his fastball. While this isn't ideal for a late inning reliever, we have seen pitchers get buy for short periods of time with less stuff (see: Valverde, Jose).

Raburn also threw a changeup at 80.5 miles per hour for a ball. We're dealing with a smallish sample size of one pitch here, but his whiff rate of 0% on the changeup is going to lead hitters to sit on the fastball. If he is unable to locate said fastball -- something he will have trouble with until he fixes his delivery -- then he could run into trouble. His .000 BABIP may be luck based at this point, but he is also allowing a line drive rate of 0%.

Raburn is a late innings relief option, at best. His mechanics are sound, but there's no reason for him to hold back when he will only be pitching one inning at a time. If he could up his velocity and improve his command in the strike zone, he might be a viable relief option in low leverage situations. Further development of his changeup and/or breaking pitches is warranted. His contract demands may be too high, though.

Ryan Raburn: "I told my agent we need to renegotiate now since I'm a two-way player."