St. Louis sports talkshow host and former major-leaguer Jack Clark has found a way to make a quick name for himself in his first week on the airwaves: Accuse Justin Verlander and Albert Pujols of PED use. We'll skip all the Pujols stuff (you can read more about it at Baseball Nation) and move right to the Verlander dish, via the St. Louis Post-Dispatch:

"Verlander was like Nolan Ryan, he threw 97, 98, 100 miles an hour from the first inning to the ninth inning," Clark said on the air. "He got that big contract, now he can barely reach 92, 93. What happened to it? He has no arm problems, nothing's wrong. It's just the signs are there.

"The greed ... they juice up, they grab the money and it's just a free pass to steal is the way I look at it."

It feels almost pedantic to match the unreasoned, knee-deep, spoken-out-of-his-butt Clark with facts, but we may as well bring a few into this, right? 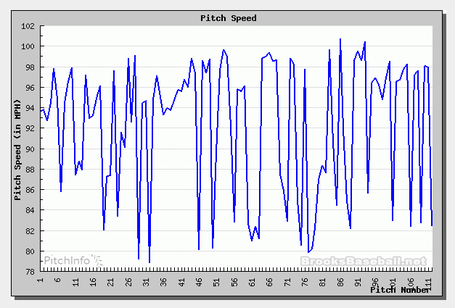 So, he started slow, pacing himself, working his way above 98, eventually reaching 101 (actually 100.75), according to the PitchFX tool.

Obviously it's too early to tell if Verlander's mechanical fixes will hold, and you have to admit up until his most recent start he hasn't looked as good as he has in the past. But he's still got the 28th best FIP among starting pitchers in the MLB, and he sure looked a lot more like expected during his last time out.

Jack Clark doesn't know what he's talking about -- which, sadly, is par for the course in the sports talk industry.