Thought to have suffered a concussion Thursday night, Alex Avila was reevaluated by doctors in Detroit. Avila was cleared to play and will re-join the team in time for tonight's game.

Share All sharing options for: Doctors clear Alex Avila to play against Yankees

Tigers' starting catcher Alex Avila took a beating behind the plate in Thursday's 10-3 victory over the Indians. He was removed from the game after being hit hard enough in the mask by a fourth inning foul ball for blood to trickle from his left ear. 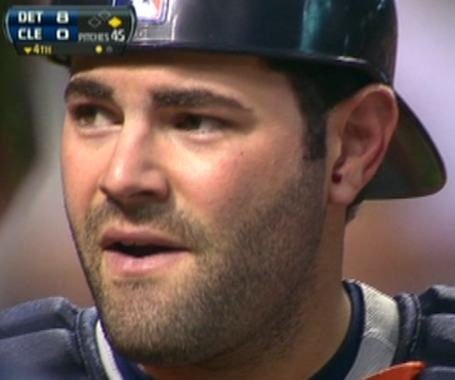 Avila was sent to a Cleveland hospital after suffering from concussion-like symptoms, complaining of nausea and light-headedness. After being looked over in Cleveland, Avila was sent back to Detroit for reevaluation, immediately triggering fears the Tigers' baseball magnet catcher was headed to the 7-day concussion disabled list.

Those fears turned out to be unwarranted.

Alex Avila was re-evaluated and is cleared to play this evening. He is joining the team in New York for tonight's game. #Tigers

The possible loss of Avila would have been a blow to a Tigers' lineup already battered by injuries and Jhonny Peralta's 50 game suspension.

Avila struggled up to the All-Star break, ending the first half with a .177 batting average. But the second half has rejuvenated Avila, hitting .280/.333/.540 with three home runs and 15 RBIs in 14 games post break.