Led by Rick Porcello's ten strikeouts and RBI singles by Victor Martinez, Omar Infante, and Torii Hunter, the Tigers knocked off the Mariners in a workmanlike manner.

Rick Porcello struck out ten in six innings of work, Victor Martinez drove in the go-ahead run with a sixth-inning single, leading the Detroit Tigers to a 4-2 victory over the Seattle Mariners. The win reduced the Tigers' Magic Number to a mere eight seven. (Royals knocked off the Indians, 7-1.)

Porcello (13-8) shut the Mariners down on five hits, allowing one run. The ten strikeouts were one short of Porcello's career high, set in May of this season. Joaquin Benoit pitched the ninth, recording his 21st save in as many chances.

"Change up. Might have been the best one I've seen him have." -Jim Leyland, when asked about Rick Porcello's effectiveness

Mariners' starter Joe Saunders (11-15) was quite effective ... until the sixth. Having allowed just one run and four hits through five innings, Saunders served up three consecutive two-out singles, the Tigers taking a lead they would never relinquish. Saunders was pulled after 5 2/3 innings, seven hits and three runs, tagged for the loss.

The Tigers' offense didn't do much, but didn't have to with Porcello on his game. The Mariners held Detroit to nine hits, but Martinez, Omar Infante, and Torii Hunter all contributed to the cause with RBI singles. A Saunders wild pitch accounted for the Tigers' first run of the night.

For the Mariners, Abraham Almonte hit a solo homer in the third, Justin Smoak adding an RBI single in the eighth.

The Tigers knocked off the Mariners in workmanlike fashion. The offense did just enough, while Porcello and the bullpen made it hold up. Not really much more to it than that.

Without question, the Tigers are a far, far better team. When the Mariners' equalizer, King Felix Hernandez, isn't on the mound, the Tigers really shouldn't have much trouble disposing of them. As we saw tonight, it's just a matter of time.

More Detroit Tigers news and views: Game 150 Preview: Mariners at Tigers DL stint may have done Avila some good The Tigers' offense from a second half perspective

Top of the first, Rick Porcello needed a nifty defensive play by Jose Iglesias to keep the Mariners off the scoreboard.

Dustin Ackley led off the game with a line single to right. He would advance to second on a wild pitch, third on a fly ball to deep left. Two down and the lead run 90 feet away, Kendrys Morales hit a looping liner up the middle. Iglesias was well positioned, shaded toward second, and made a leaping catch behind the bag, stopping any rally in its tracks.

Bottom half of the inning, Mariners' starter Joe Saunders quickly found himself in trouble. One out, Torii Hunter and Miguel Cabrera reached base on back-to-back singles, putting runners on the corners for Prince Fielder.

Fielder didn't have to do much, other than watching the run score. Saunders' uncorked a wild pitch that catcher Mike Zunino didn't have a prayer in stopping, allowing Hunter to cross the plate without a play.

Saunders would avoid further damage, getting out the first down 1-0.

Time for the TTBDNS portion of the recap.

Omar Infante's legs showed no ill effects from being hit by a line drive in batting practice, legging out a two-base hit on a gapper to right center. He took third on Matt Tuiasosopo's ground out, but neither Alex Avila or Iglesias could convert the RBI opportunity. Avlla struck out swinging, Iglesias bounced out to third, Saunders' dodging a bullet.

Two down in the third, Abraham Almonte (who owns a beard to match his first name) crushed Porcello's 2-2 breaking ball, sending a no-doubt solo shot to deep right. Almonte's second career home run knotted the game at 1-all.

The game settled into a surprising pitchers' duel for the next few innings. Porcello had scattered five hits, striking out seven Mariners through five. Despite showing signs of hitting Saunders hard early on, the Tigers had been unable to solve him.

The score remained tied at 1-all as the game entered the sixth inning. God forbid if another 14 inning, 2-1 marathon was on tap.

I needn't have worried.

Top of the sixth, Infante tried to make a play that wasn't there, giving the Mariners a scoring opportunity. The ageless Raul Ibanez on base with a one-out walk, Infante was able to run down Justin Smoak's ground ball in the right side hole. Instead of making the sure play at first, Infante pirouetted and fired wildly toward second, everyone safe as the ball ended up in the hands of Cabrera at third.

"No, I don't worry about that." -Jim Leyland on Magic Numbers

Porcello deftly pitched out the jam by recording his ninth and tenth strikeouts, Nick Franklin and Zunino taking a seat. But the longer at-bats had taken a toll, his pitch count soaring above 100. After giving up one run over six full innings, Porcello's night was deemed over by Jim Leyland, earning him the "Handshake of Doom."

In the meantime, the normally mediocre-on-a-good-day Saunders was cruising. He entered the bottom of the sixth at 64 pitches, barely working up a sweat, not having allowed a hit since Jackson singled in the third.

Two out in the sixth, Cabrera worked a walk (or more correctly, was pitched around), Fielder following with a single to left. Victor Martinez finally gave the Tigers' a long overdue hit with runners in scoring position, going the opposite way with a single to right. Rolling the dice, Tom Brookens elected to send the gimpy Cabrera. Luckily for the much derided Brookens, Almonte needed several tries to pick the ball up. His fumbling allowed Cabrera to lumber home without a throw and Fielder to rumble to third.

The Tigers up 2-1 and looking to extend their lead. Infante made it two straight hits with ducks on the pond, lining a single to left, Fielder crossing the plate to make it 3-1 game.

The Mariners stalled as much as they could before manager Eric Wedge made the trek to the mound, pulling Saunders. Lefty Tom Wilhelmsen ended the inning, pinch hitter Don Kelly bouncing to first. While the inning was coming to an end, Saunders was in the dugout throwing a hissy fit, tossing bottles, a cooler, and a sunflower seed container. If you're going to go down in flames, at least make an entertaining exit.

Drew Smyly entered the game in place of Porcello, and easily set the Mariners down in order.

Leading off the seventh against Wilhelmsen, Avila knocked him over by smoking a line shot off his legs. Wilhelmsen was OK, Avila credited with an infield single. Playing for one run, Leyland had Iglesias bunt Avila over.

With two out, Hunter ensured the Tigers got their run by bouncing a single to center, plating Avila to make it 4-1 Detroit.

Smyly remained on the mound in for the eighth, marking the first time he had pitched more than one inning since three straight 1 1/3 inning outings in mid-July. But Smyly couldn't make it two full innings. The Ancient Mariner, Ibanez, doubled with two out, scoring on Smokes' RBI chopper through the left side.

It was interesting use of Smyly by Leyland, who had spent the last couple of months trying to reduce the young lefty's workload.

1st time Smyly's gotten more than 3 outs since before Veras trade; 1st time he was asked to get 6 since VMart back-hand flip. #Tigers

How best to use Smyly, as always, remains a question mark.

WAS DREW SMYLY USED PROPERLY THIS EVENING I DO NOT KNOW

Jose Veras got the call out of the pen, Wedge countering by pinch hitting with lefty Michael Saunders. Leyland came out the X & Os victor, Veras ending the inning on a can of corn to right.

Top of nine, the Tigers still holding a 4-2 lead, Joaquin Benoit was looking for his 21st save. He didn't get off to a good start, walking the .214-hitting, number-eight-batting Franklin on five pitches. Before anyone could start to worry about a light-hitting lead-off man reaching base, pinch hitter Endy Chavez bounced into a tailor-made 4-6-3 double play.

Ending the foolishness, Benoit slammed the door shut on the Mariners by striking out Ackley.

Your final score is Tigers 4, Mariners 2. Combined with Cleveland's loss to the Royals, your magic number is down to seven with 12 games left to play.

The Tigers' victory raises their season record to 87-63 (.580), still third best in the AL. Their lead in the Central stands at a solid six games.

Maurer started the season in the Mariners' rotation, but was sent to Triple-A in late May after starting the season 2-7 with a 6.93 ERA. He returned to the team in July, working out of the bullpen without much success, posting a 6.64 ERA in 20 1/3 innings. Maurer returned to the Mariners' rotation last week to replace an injured King Felix Hernandez, only to be shelled by the Astros, allowing seven hits and five runs in just three innings.

Sanchez has been lights out as of late, not allowing a run in his last 13 1/3 innings, lowering his AL leading ERA to a shiny 2.50. His Cy Young candidacy steadily building, Sanchez has won seven straight games, while the Tigers are 9-1 in his last ten starts.

On what should be a cool, clear night at Comerica Park, Tuesday night's first pitch is set for 7:08 PM.

Thanks to Dove Men+Care and their #BigLeagueDads program, BYB's own HookSlide and HookSlide Jr. were on the field for batting practice today.

Follow along with BYB's HookSlide, he's on field for Tigers' BP RT @HookSlideBYB We were this close to the Big Man. pic.twitter.com/xLqj5k4kdZ

During BP, Omar Infante was hit in the leg by a line drive off the bat of Victor Martinez. Hopefully HookSlide wasn't involved. Infante was sufficiently recovered by game time, and remained in the starting lineup.

Rod Allen speaks, Rogo does 60 seconds worth of research to refute everything he said.

I enjoy Rod Allen, but like most analysts, he can silly things just to avoid a few seconds of dead air.

That's worth an extra million or two in free agency. @catswithbats Infante with high socks? I approve. 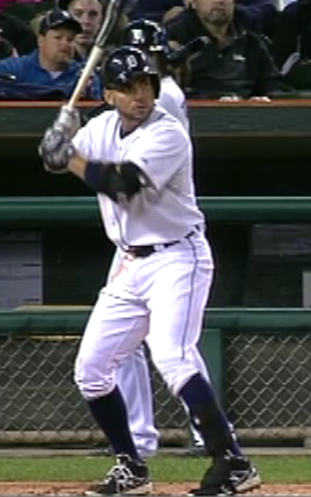 Meanwhile, in Tampa Bay there were more Florida-style shenanigans:

Rick Porcello: Since he was shelled by the Red Sox September 4, in his last two starts (including tonight) Porcello has pitched 15 innings, allowing just two runs on 12 hits, striking out 15.

Porcello recorded his 61st career win, passing Dan Petry for third for the most victories by a Tigers' pitcher before turning 25. He's not going to catch numbers one and two - Hall of Famer Hal Newhouser (94) and Denny McLain (90).

Matt Tuiasosopo: A bad day got that much worse for Tuiasosopo. After hearing the news the Tigers are hoping Jhonny Peralta can replace him as the right-handed side of a left field platoon, Tuiasosopo responded with an 0-for-2 night. He was pulled for Donnie Baseball in the sixth.

Supply all the offense in a 3-2 victory by slugging two home runs, the second an eighth-inning game winner, will make you a shoo-in for PotG. Being Alex Avila was the slugger, he took PotG honors, carrying 75% of the vote. Of note, Ned Yost ignoring his bullpen came in second, topping an excellent Max Scherzer by six votes.