Dove, Big League Dads, and a night at Comerica

My son and I were guests at Comerica for a night, courtesy of the Dove Men + Care "Big League Dads" program. This was our experience.

Share All sharing options for: Dove, Big League Dads, and a night at Comerica

There were about five or six young boys lined up at the edge of the grass behind home plate, my own son included, all holding their baseballs and pens and patiently waiting to get some "face time" with and autographs from their ballpark heroes. He may have missed out on getting a ballplayer's autograph, but we came away with a night far more special than just that.

Even though we were on the field for almost an hour, with the entire Tigers starting lineup milling around, and even though this was a "Big League Dads" promotion (which I assumed would mean a special emphasis on the kids in attendance), none of the players made the 30-foot journey to come over and sign autographs. As batting practice wound down and the last of the players retreated back to the dugout, I saw six pairs of shoulders slump, as the realization slowly set in that those baseballs were going back home clean and signature-free.

As an adult, I really couldn't care less about getting an autograph. But I also remember what it was like to be nine or 10 years old, and what a thrill it was to meet my heroes up close, to take home a little bit of scrawled memorabilia and a memory. As a "Big League Dad" myself, it was important to me that my son should get the thrill of a lifetime, and this was the perfect opportunity for him to go home with a baseball crammed full of autographs.

Instead, the Tigers players spent most of their free time between batting sessions over on the first-base side, chatting up and visiting with the Mariners players. That stung a bit. These kids are the fans, the ones who "root for the home team," and they are the ones who will (hopefully) be supporting the team in the next generation -- they deserved a bit of attention, and they didn't get it. My own son has tried and failed three times this season to get Miguel Cabrera's autograph, and if being right there on the field and standing a stone's throw away from the players isn't going to get the job done, I'm out of ideas. Maybe next year.

We did have the opportunity to watch batting practice, and it didn't disappoint. Both Miggy and Prince hit several bombs into the seats, and that's just pure entertainment all by itself. And to his credit, at one point Miggy looked over at us, noticed my son's "Cabrera 24" shirt, and gave us a smile and a nod. Believe me, Hookslide Jr. has told that story to his friends about a hundred times already. 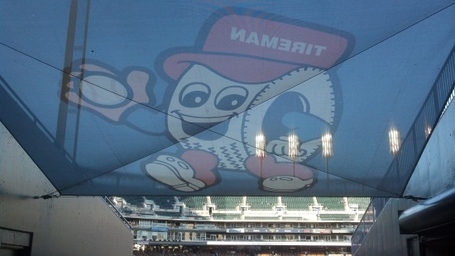 For anyone who has ever played catch with a kid, you know that this is a sacred moment

When the Tigers were finished taking their swings, our group was escorted back to the concourse, where we took an elevator into the bowels of the stadium and walked the concrete hallways to the gates in right field. Once the Mariners were done with their batting practice session, we were taken out onto the grass in right field, given baseballs, and allowed to play catch on the field for about 5-7 minutes. This was easily my favorite experience of the entire evening. For anyone who has ever played catch with a kid -- whether your own or someone else's -- you know that this is a sacred moment, and there's nothing in the world quite like it. They say that hot dogs always taste better at the ballpark than they do at home, even if you buy the same brand, and I can now say that the same is true of playing catch. I've played catch with my son a thousand times in his young life, in our back yard, in the park, on little league fields, in the basement, and anywhere else, but it's so much sweeter on the grass in right field at Comerica Park.

For me, this was the pinnacle moment of my "baseball relationship" with my son as it has unfolded this summer. For whatever reason, this particular summer has been our "summer of baseball" in a way no other summer has. We've watched dozens and dozens of games together this season, we've listened to countless games on the radio together, we went to several Whitecaps games, we went to three Tigers games (we got to meet Dan Dickerson before one of those games!), and I coached his little league team for the first time this year.

This was a perfect and fitting conclusion to all of those experiences, as our summer gives way to fall and the baseball season winds down -- playing catch on the field, right in the spot where Torii Hunter chases down fly balls and robs extra-base hits. 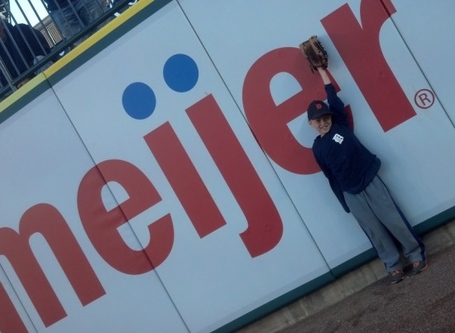 When we got back on the elevator to return to the main level and go to our seats, one of the Dove Men + Care representatives told the kids that they could keep the baseballs we'd used for the catch session, and said to them, "You guys should keep those baseballs in a safe place, those are very special. In fact, you should all have your dads sign them for you, and keep them forever."

That's when the light went on for me.

This year especially, we fans have heard a lot about how ballplayers are role models and heroes for young boys, and in the midst of PED scandals, we've heard the question repeated, "What message are we sending our kids?" I have a different perspective. Ballplayers are entertainers, and they're paid to perform. They're no different, in this sense, from an actor or actress in Hollywood.

Why should they be the role models and heroes for our kids? They're not invested in the lives of our kids, and at some point, they will fail to live up to expectations, whether because they take PEDs, or get arrested for driving drunk, or simply because they failed to come over and sign an autograph when they had the chance. It's the fathers and those with father-like influence who are the true role models and who have the opportunity to be the true heroes. They should be the ones signing those baseballs, because they're the ones who invest their time and energy on a daily basis, who bring their kids to the games, who teach them how to throw and hit, who coach the little league teams and help create lifelong memories. 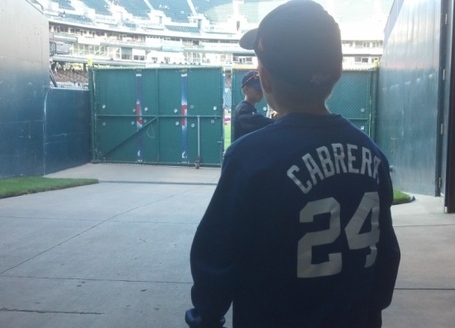 So I'm going to sign that baseball for my son. He's only 9 right now, so he can't see the bigger picture just yet, but I believe someday he will. (He sees it enough now that he told me, as I tucked him in that night, "Thanks for asking me to be part of that special night.") Someday he'll be a man, perhaps with kids of his own, and he'll find that baseball that we played catch with at Comerica Park, with my signature on it, and his memory will be of all the great times we shared together that summer, not of the fact that he failed to get Miguel Cabrera's autograph for the third game in a row.

The Tigers won the game, and that's the first time my son and I have seen them win a game at Comerica, ever. There were plenty of opportunities for us to leap out of our seats, scream and cheer, and give each other high fives, just as we've done all season long in our living room. Joaquin Benoit ended the game with a strikeout, and my son was so excited that he jumped from his seat right onto my back and rode me like a pony as we celebrated the win. I'm OK with that. In a few years, he won't be able to do that without putting me on the 60-day disabled list, so I'll take it while I can get it.

After all, I am a Big League Dad.

Special thanks to Dove Men + Care, Brandon, Jim, Angel, Al, and of course, Hookslide Jr. for an amazing night and a hundred new Dad-sized memories.