Injuries have taken a toll on Cabrera's stats this month, meanwhile Mike Trout and Chris Davis have closed the gap.

Share All sharing options for: Is Miguel Cabrera still favorite for MVP?

Like a horse faltering down the stretch, Miguel Cabrera can hear the hoofs pounding the dirt behind him and it's getting louder. The only question is, did Cabrera do enough heading into September to hold Chris Davis and Mike Trout off in the American League MVP race? 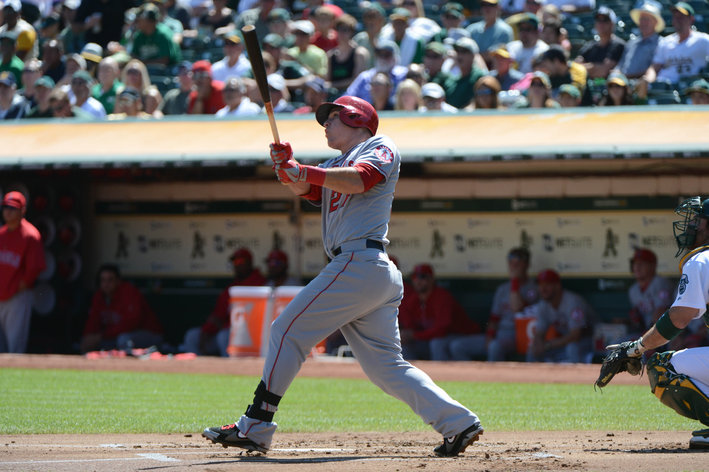 Grant Brisbee writes that the Millville Meteor isn't just matching his 2012. He's improving upon it.

At one point, you could write Cabrera down as a unanimous-vote winner. Cabrera still leads one of the triple crown categories -- he's got a .347 average to Trout's .330. Davis has tied Cabrera at 134 RBI. With 51 Davis has an insurmountable seven home run lead. That's because Cabrera is hitting .227/.393/.318 in September. He has driven in four runs and has hit just one home run since Aug. 26. Since the start of the month his OPS has dropped 35 points. This is a player whose batting line was .358/.449/.681 at the end of August.

Cabrera's stumble has left the door open for voters to find other narratives they prefer. Maybe Davis leads the Orioles into the playoffs -- if so, coupled with his home run total, that is probably enough to justify MVP votes. He's just the 27th player to make the 50 home run club and that RBI total is remarkable. Fortunately for Cabrera, he's closing stronger when it comes to narrative than he is when it comes to stats. Davis is batting .214 with .714 OPS in September -- though he does have four home runs.

Maybe Trout -- by any measure but one deserving of the award -- is able to rise above his team's failure to make the playoffs. Trout has an astounding .496 OBP in the second half. Entering Thursday his OBP was .502 in the second half. You should just save a search string that says "Mike Trout first player" because you're going to keep needing it.

Already, Trout this year became the first player in major-league history with at least 50 homers and 70 steals before turning 22, according to the Elias Sports Bureau. And he is one of just four players all-time with at least 50 homers, 200 runs scored and a .320 batting average in his first two full seasons.

The other three? Joe DiMaggio, Ted Williams and Albert Pujols.

A day after becoming the first American League player to compile 25 home runs, 30 steals and 100 walks in the same season, the Los Angeles Angels center fielder homered again in Wednesday's 5-4 victory against the Oakland Athletics.

Of course he did.

The point is, Trout is deserving of any laurel he receives and he is completely deserving of not just MVP votes, but the MVP award itself.

But because his pitching staff have the seventh-worse ERA (4.24) in the game and none of his teammates with regular playing time have an OPS over .775, Trout's not even going to get consideration from some voters. Of the three players though, he's closing the strongest. In September Trout is batting .328 with 1.084 OPS.

Did Cabrera do enough in his first five months to win a second consecutive MVP award? Can Davis' Orioles make the playoffs, bolstering what should already be a strong argument for the award? Will voters look beyond the Angels record and marvel at just what an incredible player Trout is?

Is Miguel Cabrera still the favorite to win MVP? I think so.

But it's going to be an interesting vote.