As goes Cabrera, so go the Tigers.

Share All sharing options for: Tigers' offense sputters in September

The last time I checked, it is still September. I have to check frequently, because these days most of my brain power is devoted to forgetting those images of the Tigers' rookies dressed in princess costumes, thus leaving me with insufficient brain power to retain certain basic information, such as what month we're in, or what my name is. However, having just looked at my wall calendar, I can confidently state that it is September, and that means the playoff season is lurking just around the corner, probably waiting to jump out and scare you spitless. (The playoff season has always been kind of a major dillweed to Tigers fans, at least since 1984 anyway.)

As the Tigers go hurtling racing jogging limping towards the playoff games, it's getting more and more difficult to ignore a glaring problem: they're not scoring runs in September. After swimming in July's pool with an 18-8 (.692) record, then bat-flipping all over August's lawn with a 19-11 (.633) record, the Tigers have flopped back on September's couch with several bags of chips and a bucket of French onion dip, posting an eyebrow-furrowing 12-10 record (.545) so far.

The reason they're not winning as many games in September is that they're not scoring as many runs, and one of the great intricacies of baseball is -- follow me closely here -- you need runs to win games. The starting pitching has been just a few shades darker than "friggin' amazing," but when your offense is held to three runs or fewer in 55 percent of September games, bad things happen, because starting pitching isn't enough.

The following graphs demonstrate, for those who understand the basic concepts of "up" and "down," what has been happening in the past few months to the Tigers' run production: 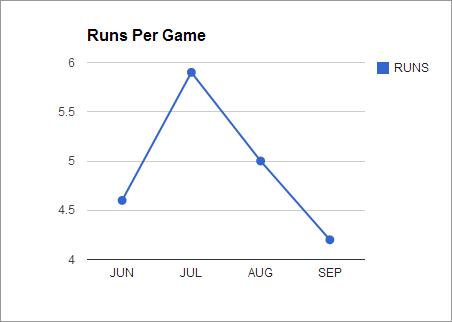 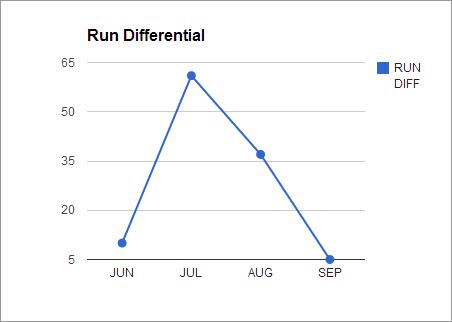 What's difficult to understand is how the Tigers' offense can be struggling so hard when, excluding an early September matchup against the Red Sox, their opposition has consisted of the Royals, the White Sox, the Mariners, the Twins, a box of stale whole wheat pasta, six fourth-graders with a beach ball, and an angry contingent of amputee lemmings.

Austin Jackson has been hitting .274 with a .696 OPS in September. Torii Hunter, whose batting graphs have more random spikes than Bryce Harper's "bro-hawk," has posted a .277 average with a .697 OPS. Prince Fielder has responded to all the tabloid-like speculation that his crumbling marriage was affecting his hitting by posting a .368 average and an OPS of .997 this month. And just forget about Victor Martinez. His September .325 average with an OPS of .886 have made him a viable candidate to replace Jennifer Lawrence in the upcoming "The Hunger Games: Catching Fire" movie.

So what's the problem here?

In September, Cabrera has posted a .262 batting average and a .728 OPS, which is normally reason enough to take a day off work and throw yourself a pamper-me party, except for the fact that this is Miguel Freakin' Cabrera, who had just posted a June-July-August slashline of .347/.451/.691 with an OPS of 1.142. He missed two games at the beginning of August, and then seemed to be rolling right along for the rest of the month, right up until August 26. From August 4 to August 26, he hit 11 home runs, knocked in 31 RBI's, smacked five doubles, and was worth about 30 runs created (if Bill James's formula means anything to you). Since that time, he has hit exactly one home run, driven in seven RBI's, hit just one double, and has been worth about 10 runs created.

It's almost enough data to make one think, "Hm, maybe this injury really does affect more than his fielding and running."

Here's another graph-based view of the tragedy: 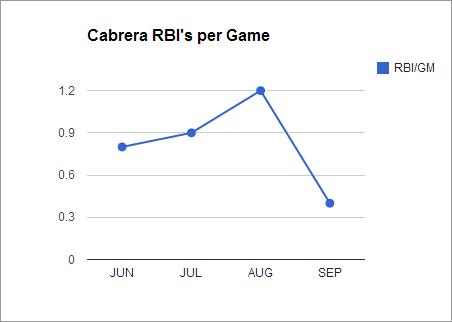 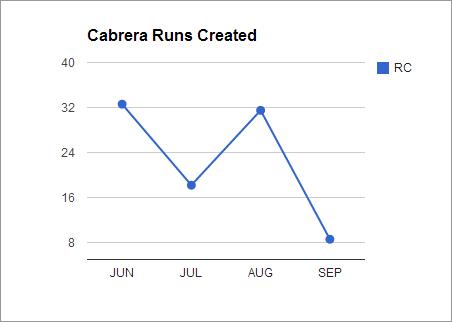 We all know that anything can happen in the playoff games, and any team can win enough games in a short series to take home all the marbles. (Though I'm not sure why anyone would want to take home a bunch of marbles after winning the World Series.) However, the odds are probably against the Tigers if their mediocre September is directly tied to Cabrera's strained muscles, and not just because of some weird late-season slump. Slumps are fluky, and can disappear just as quickly as they appeared. Injuries, on the other hand, don't go away so quickly.

I made a joke several weeks ago on the Bless You Boys podcast that Jhonny Peralta would end up being the October hero, just to purposefully throw the anti-Peralta part of the fan base into confusion. But without a healthy Miguel Cabrera on the team, it's looking more and more like that's exactly what needs to happen if the Tigers are to have a chance at winning in the playoff season.