The discussion in the last BOTS post referenced the higher frequency of Pumpkin/October/Fall beers earlier and earlier in the year. While this seems counter intuitive for seasonal appropriateness, it makes sense with popularity. Octoberfest is Sam Adams' most popular seasonal, and the case is similar for many other craft breweries. However, I, like you, do fear the "peep effect." This is the time for the Octoberfest beers, though, and I will drink them while they're out there because they are very tasty. Anyway...

With only a few short weeks left in the season, the Tigers make their final trip to Kansas City to take on the pesky Royals. Previous incarnations of the bunch have given the Tigers fits despite finishing at or near the bottom of the division for years, but now that the Royals are fighting for a wild card berth, there is incentive beyond spoiling things for Jim Leyland's team.

The trend for the season has been pitching for the Royals. The rotation has grown much stronger throughout the season, and given the fact that their young bats have also started to blossom, this teams features the makings for a potential playoff mainstay in the future. Rangy outfielders, sure handed infielders, and capable farmhands could challenge the Tigers for years to come. And if any of them can brew beer, the could allow me to write about something other than a brewery across the state.

As stated in the last BOTS article, the KC area features slim pickings aside from the fantastic Boulevard Brewing Company. So for our final KC beer, we're actually traversing to St. Louis, but not to that brewery. Urban Chestnut produces a fine full slate of beers including the very popular Winged Nut Chestnut Ale. 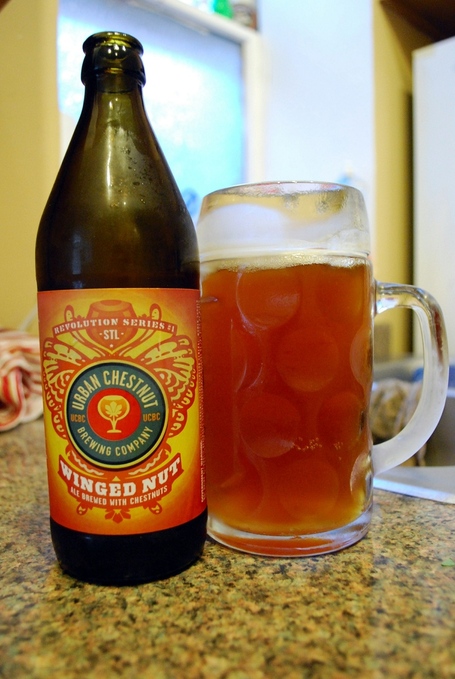 The Winged Nut is brewed with chestnut flour along with the hops and malt, imparting a rich copper color and a beautiful roasted nut character found in most brown ales. The roasted crystal malts evoke fresh baked bread, giving the beer a pleasant chewiness and character that is matched by a delicate hop infusion. The bold, strong flavors are cleansed nicely from the palate with a clean finish, and the 5.7% ABV and 22 IBUs will allow you to keep coming back for more all weekend with some tasty barbecued chicken.