Chris Sale showed he's one of the best pitchers in the game, holding the Tigers to one run over eight innings. An out-of-sync Max Scherzer lost his second straight, Miguel Cabrera was ejected in the first inning as the Tigers' lead is now just 4 1/2.

The Detroit Tigers' losing streak reached three and their lead in the Central dropped to just 4 1/2 games in falling to the Chicago White Sox 5-1. Despite coming into the game having lost nine of ten, the last place White Sox were never in trouble against the first place Tigers.

It was a bad night all around for the Tigers. Max Scherzer fell short in his third attempt at winning his 20th game of the season. Miguel Cabrera and Jim Leyland were both ejected in the first inning for arguing over a checked swing - hit by pitch call.

The White Sox were carried to victory by a brilliant Chris Sale (11-12), who made the most of rare run support. The young left-hander shut down the Tigers on just four hits over eight innings, allowing just one run.

Going for 20th win, Scherzer (19-3) was off his game from the first batter on, and was pulled after four innings. In his shortest stint of the season and second straight loss, Scherzer allowed five runs, four earned, giving up six hits and walking two. Jose Alvarez gave the Tigers a chance at getting back in the game with three shutout innings of relief, but Sale wouldn't allow it to happen.

"We ran into a buzzsaw in Sale" -Jim Leyland, stating the obvious.

The White Sox had just eight hits, but made them count. They took a lead they would never relinquish thanks to a first inning two RBI single by Paul Konerko. Dayan Viciedo and Josh Phegley added RBI singles for the winners.

All the Tigers' offense came on one swing of the bat, Victor Martinez hitting a solo homer in the seventh.

If Cabrera hadn't gotten himself tossed and Scherzer didn't throw like the pitcher who was sent down for a couple of games in 2010, maybe the Tigers make a game of it. When the leading MVP candidate getting his ass tossed when his offense is badly needed and the leading Cy Young candidate is yanked after four ineffective innings, should anyone be surprised the Tigers lost?

Top of one and two out, MLB umpires continued their quest to make the game all about them and only them. Add home plate umpire Brian Gorman to the list.

Facing White Sox starter Chris Sale with two outs in the top of the first inning, Cabrera attempted to check his swing. As he did, Sale's pitch hit Cabrera in the back leg. 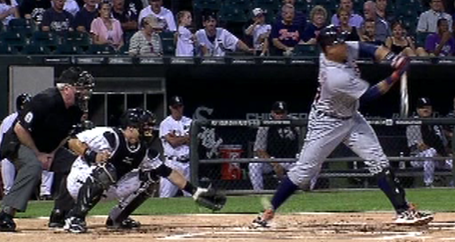 Cabrera asked for an appeal, but nothing came of it. Replays confirmed Cabrera was hit by the pitch, As for the checked swing, the call could have gone either way.

Everything proceeded as normal with the count now 0-2, as a peeved Cabrera fouled off the next pitch. But he stepped out of the batter's box, said "something" to Gorman, and was immediately tossed (MLB.com video). 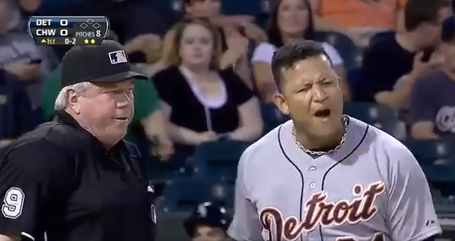 Jim Leyland argued in vain, all he got for his efforts was an ejection, joining Cabrera in the locker room.

The count 0-2, Cabrera was replaced wiith Ramon Santiago, who bounced out to end the inning.

Yes, Brian Gorman probably got the call right. But he got everything else terribly wrong.

A bad game quickly got worse, thanks to the bane of pitcher's everywhere, the lead off walk.Scherzer started his night by walking the first two batters he faced, Alejandro De Aza and Gordon Beckham. After both advanced into scoring position on Adam Dunn's fly out to deep center, it appeared Scherzer would get out of trouble, needing just one strike to end inning. But Paul Konerko lined a two out, two strike, two RBI single to center.

Any chance at a play at the plate went out the window when Austin Jackson didn't handle the ball cleanly in center. It didn't make any difference, but Jackson's (and Cabrera's, and Scherzer's) miscue signified everything which had gone wrong for the Tigers in less than an inning.

Conor Gillaspie struck out to end the inning, but the Tigers were down 2-0, along with one third baseman and manager.

The Tigers had placed themselves directly behind the 8-ball. They have trouble hitting left-handers as it is, and Sale is not only one of the best lefties in the game, he's one of the best pitchers in baseball, period. With Sale pitching, a two run cushion might just be enough for a White Sox victory.

Turned out two runs would be plenty.

Sale and Scherzer proceeded to exchange scoreless innings.The only Tigers hit through four was Victor Martinez's single in the second inning.

Scherzer was still battling his command as the game wore on, but just as you thought he was straightened out? He got nicked for three two out runs in the bottom of the fourth.

Not having allowed a hit since Konerko's single in the first, Gillaspie lined a two out double into the right field corner. Dayan Viciedo followed by going the opposite way with a one-hopper, finding the hole between a diving Prince Fielder and the first base bag. The RBI single gave the White Sox a 3-0 advantage.

Scherzer was unable to get out the inning cleanly, Jordan Danks single extending the inning, sending Viciedo to third. Scherzer proceeded to shoot himself in the foot, taking the Tigers' chances at a win behind the shed and shooting it as well.

"You got to really work to keep guys in a game this time of year, with the stakes." "The ejection was totally, totally unnecessary." -Leyland on the ejection of Miguel Cabrera

Instead of waiting to see if Josh Phegley's swinging bunt would roll foul, Scherzer made a bad situation far worse by flinging a wild throw into right field. Two runs scored on the play, Phegley ended up on third credited with an RBI single, with Scherzer's throwing error accounting for the second run.

No matter how you rack it up, the Tigers found themselves down 5-0. Expecting a comeback with one of the best arms in the game in Sale is ... nah, game's over.

Nick Castellanos earned his second hit of his career (and first to leave the infield) leading off the fifth. He yanked Sale's 0-2 breaking ball into left, only the second hit of the game for the Tigers. That's where any excitement would end, Omar Infante bouncing into a fielder's choice, Brayan Pena ending the inning with a double play.

Interim manager Gene Lamont gave an ineffective Scherzer the hook after just four innings and 90 pitches. Entering the game was lefty Jose Alvarez. He decided to model the start of his inning on Scherzer, walking the first two batters he faced, Beckham and Alexei Ramirez.

Alvarez got himself together and ended the inning in impressive fashion, striking out Dunn, Konerko and Gillaspie. Alvarez wiould remain impressive, but the offense couldn't get back in the game.

A runner on and two out in the sixth, there was an encore of the ump show. The exact same play went down with Santiago as it did with Cabrera. Santiago tried to check his swing, the pitch hitting him in the back leg. The difference? Santiago clearly went around.

Instead of a wild pitch and two runners on base, it was strike three and inning over. A weird, frustrating game got that much weirder and frustrating.

Tigers have three hits and two HBPs that turned into outs

Top of seven and Sale seemingly on his way to a shutout, Martinez got the Tigers on the scoreboard. Sale's 95 MPH fastball found the heart of the plate, Martinez turning on it. The resulting high fly ball carried over the wall in left center for Martinez's 12th home run of the season, pulling the Tigers within four at 5-1.

Alvarez had three very good innings of relief, holding the White Sox scoreless. Bottom of eight and in need of work, Joaquin Benoit made his first appearance since a week ago Sunday. Benoit allowed a two out double to Gillaspie, but Viciedo bounced out to end the threat.

After eight excellent innings from Sale, White Sox manager Robin Ventura gave his setup man, right-hander Nate Jones, the ball to close out the ninth. It was more of the same, the Tigers going down meekly 1-2-3.

A lousy game over. Your final score is White Sox 5, Tigers 1.

With two games remaining on the second to last road trip of the season, the Tigers fall to 2-5 to assure themselves of a losing one. At 82-62, the Tigers' lead in the Central is now 4 1/2 games, the first time it's been under five since they held a four game lead on August 5. In the race for best overall record in the AL, it's close to becoming a pipe dream for the Tigers. The Red Sox are at .600 and pulling away. Now playing .569 ball, the Tigers have fallen behind the Athletics (.580) and are in danger of falling behind the Rangers (.566).

Game two of the White Sox series features Rick Porcello taking on a rookie right-hander making his second career start, Erik Johnson. A rotation candidate for the White Sox in 2014, the 6'3", 235 pound Johnson was called up when rosters expanded, making his first big league start against the Yankees last week. Johnson took the loss but pitched decently, allowing three runs and seven hits over six innings.

Porcello's last appearance was memorable for all the wrong reasons. He allowed a career high three home runs over five innings, throwing the snowball which would turn into the avalanche which was the 20-4 loss to the Red Sox. I suspect Porcello will be a tad better against the Pale Hose.

First pitch at U.S. Cellular Field is scheduled for 8:10 PM.

The reaction to Miguel Cabrera's quick ejection was as expected.

Sad thing is, Brian Gorman and Co. love it when their names get in the papers. Mission accomplished, clown.

True story. RT @JRFegan: Hawk and Stone struggling to maintain their glee that the Sox might have a chance now

This sums up the whole miserable situation.

They are actually talking Magic Numbers in Cleveland. Can you blame them?

"It's America, I can say what I want to say. I think the umpire pulled the trigger too fast (on Cabrera's ejection)" - #Tigers Brayan Pena

Victor Martinez: The only Tiger who had success against Sale with two hits, one a solo home run.

Jose Alvarez: Stopped the bleeding with three excellent innings of relief. Too bad the Tigers couldn't pick him up offensively.

It's become too often a refrain as of late, but it's true. No one else stood out or was deserving of a roar for the Tigers.

Chris Sale: Showed he's one of the top pitchers in the game while proving W/L records are all but meaningless.

Max Scherzer: Facing Chris Sale, the Tigers badly needed Scherzer at his best. Instead, Scherzer delivered his shortest outing of the season.

Miguel Cabrera: In the right or not, you can't get yourself tossed. Especially when you know offense would be at a premium with Sale on the mound.

Umpire Brian Gorman: In the right or not, you can't have a shorter fuse than what you'd find on a dollar store bottle rocket. It's not called "Ump show." It's called "Major League Baseball."

The 5-2 loss to the Royals didn't have much in the way of Tigers' highlights. The lone highlight was Jose Iglesias' two run home run, which made him the runaway PotG winner with 92% of the vote.