Inside an off-season banquet

An outsider takes it all in at the annual West Michigan Whitecaps' annual Winter Baseball Banquet.

Share All sharing options for: Inside an off-season banquet

It is ostensibly a simple event: a dinner and an auction to raise funds for programs at the local YMCA. Yet the annual West Michigan Whitecaps' Winter Baseball Banquet, now in its 20th year, is a bit more complicated than that. There are a host of stakeholders, each with different perspectives about what it is they want from the event, all mashed together in the same building, even the same table, for one night.

I was graciously invited by the Whitecaps to attend the event and the media session beforehand. My goals were to try take in the event, not embarrass myself too much, and possibly talk to a player or two. It was a somewhat unique position. Everyone around me was buzzing with activity and purpose, but I was able to just observe. Here is some of what I saw.

The Tigers were a bit late in arriving. For the writers this isn't such a big deal, but for the TV guys this is causing much stress. They have live "hits" scheduled and they need to set them up. Pairs of men are lining the room. One half of the pair in a sharp suit and a Secret Service style ear piece, the other half in rumpled khakis watching over a rather heavy and complex looking camera. When the Tigers arrive they spring into action and find their places. Hurry up, wait, hurry up. 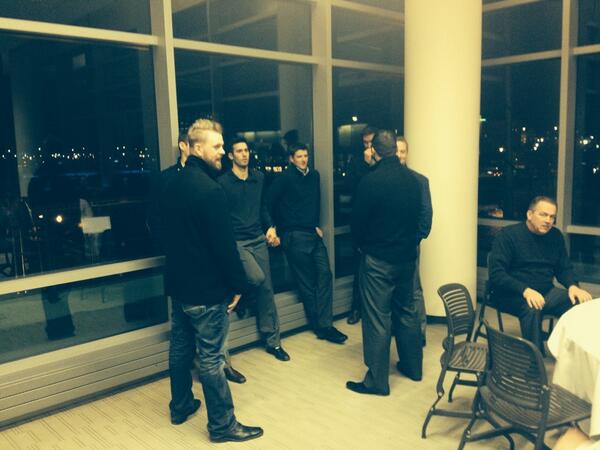 The players, fourteen of them, pile in to the room and make a beeline to the far corner to stake out chairs around the lone table in the room. Before they can reach the other side a couple of them are pulled aside and on-camera interviews are set up. Like high schoolers in a cafeteria at lunch time they quickly find the people and spots where they feel most comfortable. You get the sense that they are just trying to get through the night without much hassle. Can't say I blame them.

Following up on a silly Twitter conversation I introduce myself to Drew Smyly and ask him if he can indeed dunk a basketball. He reports he can. I ask a couple more chit-chat questions and let him go. I ask Bryan Holaday a few questions about getting ready for a more permanent role this year and he is patient with me and graciously answers.

I'm in way over my head. I have no experience and no training on what to do. I realize I have made a big mistake. I have come with no agenda about who specifically to talk to and what exactly to ask them about. It makes the creepy business of interviewing someone that much more creepy. Think about it, here is a social interaction where the only real purpose is telling the world what one of the people is saying. It's all just a little weird. I suppose it is less weird for the guys who have been doing it a long time, that is, the... 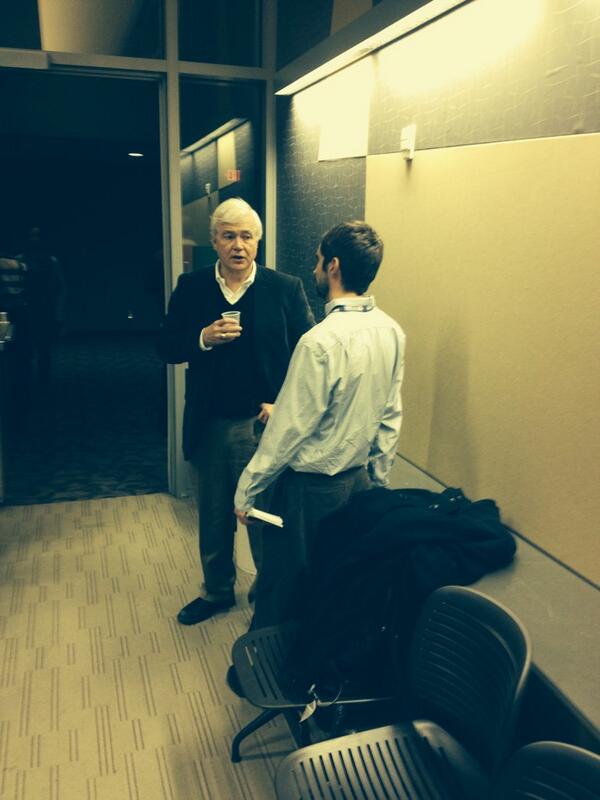 There are only a handful of writers in the room. They certainly have a game plan. They know all the people in the room, they know what they want to write about, and they go after the people they need. After the session I have a whole new respect for them, yes, even Lynn Henning. Typing up random Tigers stuff is one thing, but sticking your nose and your recording device into a guy's face and asking questions, the right questions, is tough. And the players can either make it relatively easy or quite hard. I don't think I'll criticize a reporter for "not asking the tough questions" quite so fast again.

While I'm pondering this, I'm distracted by a mini-swarm of people around...

It is very clear he is the big fish. Everyone wants to get a snippet of what Dave has to say. And Dave knows exactly what to do and say. He smiles. He nods. He's very good at what he does. I start to wonder, why are there six cameras around Dave when they could be talking to any number of much more interesting players? Dave really isn't going to say anything we don't already know. Then it dawns on me. I'm a huge dork. Most people don't know who Luke Putkonen or Bryan Holaday even are. These interviews aren't for Tigers fans, they are for mass consumption. Most people who will watch these video clips don't read Bless You Boys everyday. Generalities are perfectly fine.

The poor coaches. No one at the media session or even the banquet is particularly interested in talking to them. I probably have 25 Wally Joyner baseball cards in my basement, maybe you do too, and people are walking by him with no idea.

It's amazing what a uniform will do. In a few months fans will be yelling at these guys and asking for baseballs, but in jeans and out of context, no one pays them much mind.

People with name tags and two way radios are all over. They are a very sharply dressed bunch, let me tell you. As chill and ho-hum as the players are, the staff is much more concerned about time frames and organization and getting people where they need to be. Fans never see these folks, but when an event or game happens without hiccups you know these folks are doing their job and doing it well. 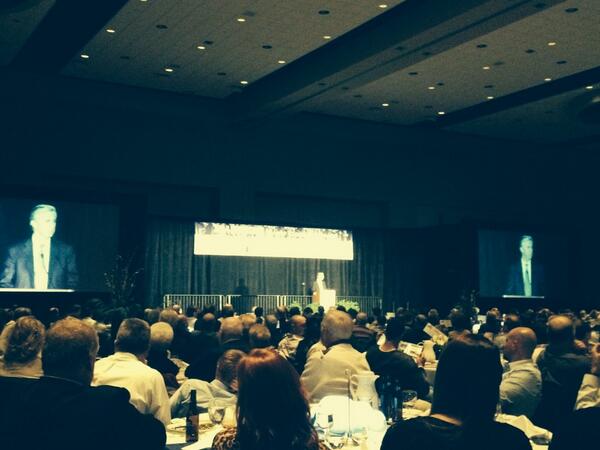 Spending so much time on the Internet and with Lions fans can make you a little bitter.

Finally, the last and most abundant stakeholder at the banquet, the guests. These are certainly fans, but fans who are willing to plunk down a little money to be close to the team. They are very nicely dressed and have a strong corporate flavor. After a nice dinner the program begins. The crowd murmurs or cheers during the best parts of the video montage. They applaud when Dombrowski recaps the team's accomplishments. They clap heartily when the players are introduced and come on stage.

This is a group that is happy and wants to be happy for the club. Spending so much time on the Internet and with Lions fans can make you a little bitter. Beyond payroll concerns and Brian Kenney and Twitter wars there is the simple joy of supporting your team.

Isn't this a great thrill of baseball? Capturing little bits of the baseball experience for yourself. Getting a rush of excitement when you spot your favorite player. Bidding on a pair of game worn cleats. Chatting about the lineup and strategy with a friend. These are the experiences that drive the game.

These are the experiences that give players, the staffs, the media, and yes, even club CEOs a place at the table.