Tigers vs. Orioles ALDS 2014: A position-by-position look at the teams

A tale of the tape when two of the AL's best teams try to advance to the ALCS.

Share All sharing options for: Tigers vs. Orioles ALDS 2014: A position-by-position look at the teams

Baseball is a game of nuances and anomalies so you can never tell what will happen in any given game, no matter what a team looks like on paper. Looking at each team on paper, however, is exactly what I am doing here.

The Detroit Tigers and Baltimore Orioles are two of baseball's brightest offenses this season. Each team also happens to have a starting rotation capable of shutting down even the best lineup. Winners of their respective divisions, the series begins Thursday night at Camden Yards. 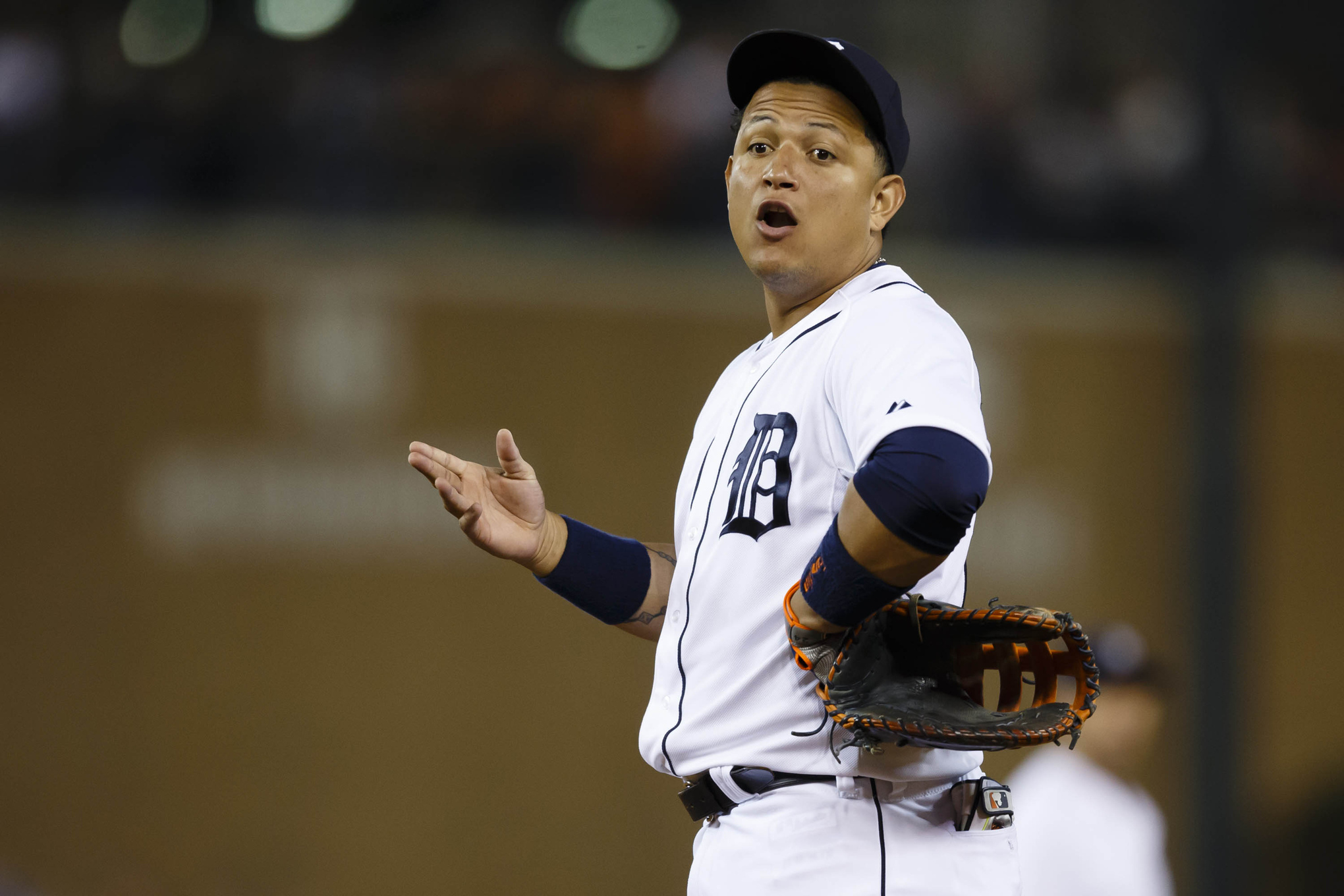 With Chris Davis out of the first round of the playoffs while serving his suspension for amphetamines, Steve Pearce has been handed the daunting task of making up for a huge loss in production. He has contributed far more than any O's fan could have hoped for, providing 4.9 fWAR in only 102 games. Unfortunately for him, his counterpart happens to be the best hitter on the planet, even in an "off-year." Even though Cabrera's home run totals were down this year, he still managed to lead the league in doubles (52). Cabrera has a habit of stepping up in big situations, so expect a few of those to find their way out of the yard.

Jonathan Schoop provided some surprising pop for the Orioles this year, which is kind of a running theme for them. He is also a good defender, saving an estimated 10 runs this year according to DRS. Outside of that he doesn't have much going for him. He would be a negative fWAR player if it weren't for his glove, and even then he is just squeaking over. Ian Kinsler has been outstanding for the majority of the year in Detroit. His propensity for popping up nine miles high onto the infield grass is beyond frustrating, but he has settled in nicely as the leadoff hitter, providing a good amount of power, speed and defense. His 5.5 fWAR leads the team.

Nick Castellanos has played admirably this season, but the hot corner is still an area of vulnerability for the Tigers. Still growing into the position, Castellanos is not the most sure-handed defender. His offense numbers are about where they should be as a rookie, but it would be nice to see him be more selective at the plate and take a walk every once in a while. In comparison, the Orioles are a mess at third base. I would be happier with Donnie Kelly Baby than the Orioles' trio of Kelly Johnson, Ryan Flaherty and Jimmy Parades. Speaking of which, Kelly is a late-inning defensive replacement option for the Tigers, alleviating some of the defensive inconsistency. 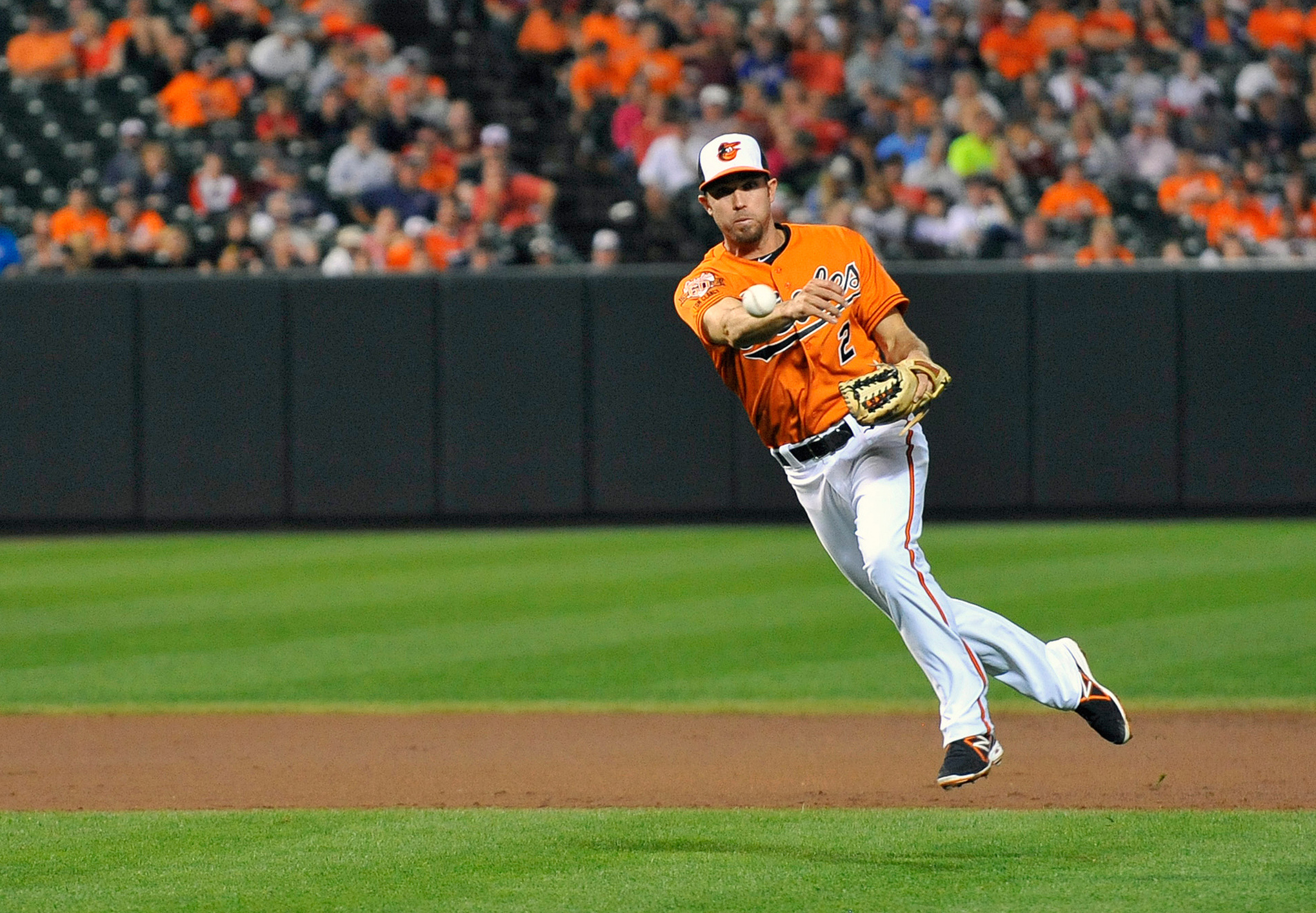 The Tigers will most likely have Romine and Eugenio Suarez share time at shortstop throughout the series, but Romine was getting more action toward the end of the year. We all know his game, weak bat with an above-average glove. He can also swipe a base in big situations. Suarez struggled mightily after getting off to a blazing hot start. Hardy had a down year by his standards but is still light years away from Romine in terms of offensive production. Justin Verlander and Max Scherzer have been able to keep Hardy quiet throughout his career, but Hardy has good numbers against David Price and absolutely owns Rick Porcello, hitting .400 off of him in 20 plate appearances.

De Aza has played well in left field since coming over in a trade at the end of August. He provides a little punch and speed for the Orioles, and can hit near the top or the bottom of the lineup. Not really excelling in any one thing, he does a lot of things adequately. In 20 games with the Orioles he has hit .293. J.D. Martinez has been a savior for the Tigers, making up for all of the offense lost in Andy Dirks' injury-riddled season, and then some. Having remodeled his swing after none other than Miguel Cabrera, Martinez has been the catalyst for plenty of late-inning theatrics.

Torii Hunter has a reputation as being one of the best defenders in the game. Formerly nicknamed Spider-Man, Hunter won nine gold-glove awards in a row and made highlight reel catches regularly. Unfortunately, his defense has plummeted to embarrassing levels as his reverence is now based on name alone. His 2014 DRS would rank him as the third-worst outfielder in all of baseball. But man-oh-man, this guy can still hit. He is susceptible to streaks of ineffectiveness, but when hot, Hunter has one of the more lethal bats in the Tigers lineup. Nick Markakis has lost a step or two in the outfield, but he still has a solid throwing arm and is capable of making most routine plays look, well, routine. Offensively, between the two there isn't much of a difference. Hunter has a bit more power, but Markakis gets on base at a higher clip. It all comes down to defense here, and unfortunately for the Tigers, it's not 2001 anymore. 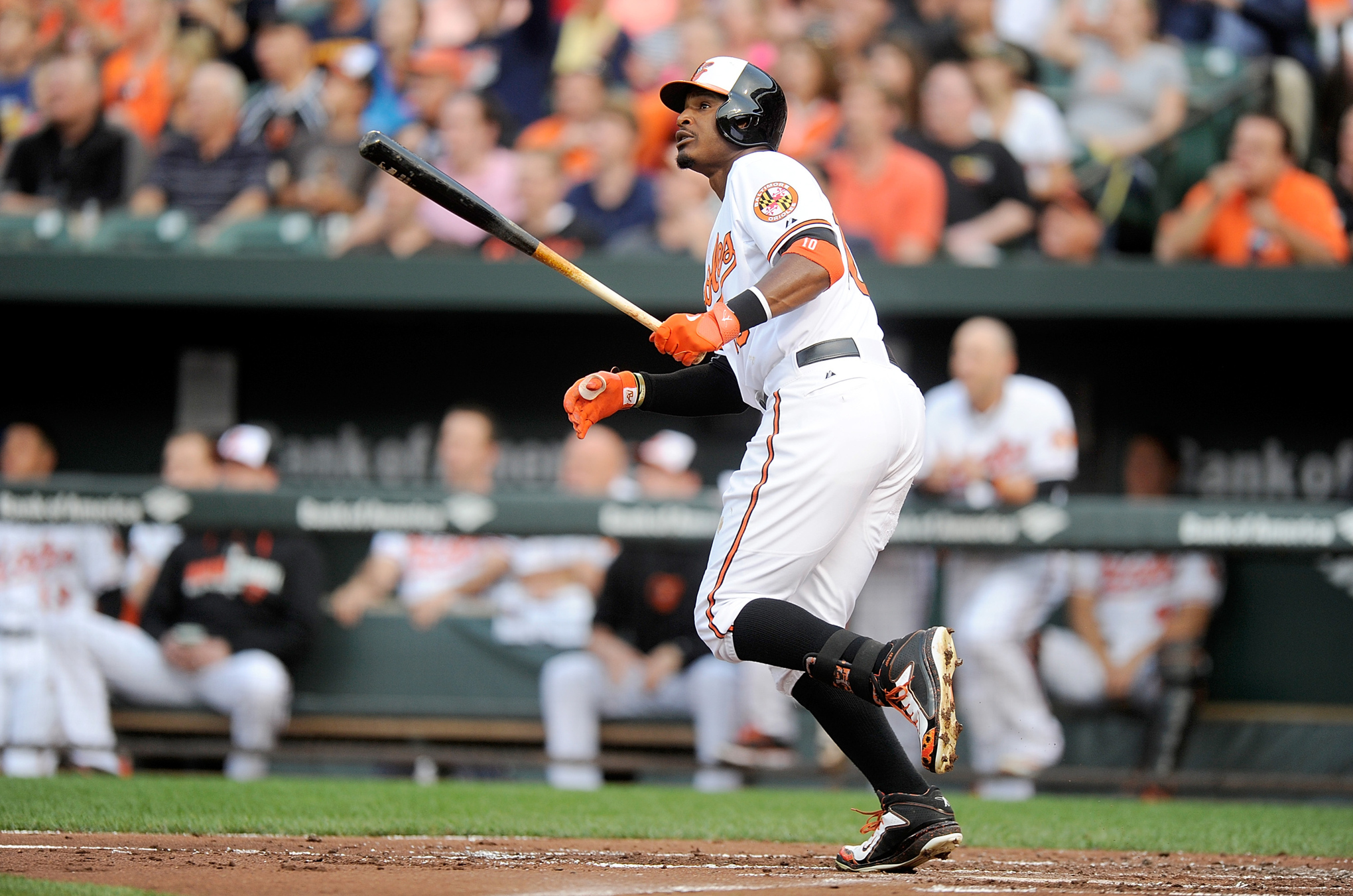 Adam Jones doesn't walk much, as indicated by his .311 OBP, but that is really the only knock on his game. He is a solid defender with a near elite-level bat. He will have the weight of a Chris Davis-less offense on his shoulders as he mans the three-hole, but he should be up to the task. Playing in his second postseason, Jones will look to improve on his .077 BA from 2012. If Rajai Davis is healthy enough to take most of the reps in center field, the Tigers will have an element of speed that they would sorely miss otherwise. Davis has been better than expected in the field since taking over for Austin Jackson, and has provided some nice offensive flurries. If Davis cannot play, the Tigers will be forced to turn to Don Kelly and Ezequiel Carerra. This is not a scenario I would like to see. Either way, the Orioles have a clear advantage here.

When you looks at Alex Avila's stats on the surface, they look horrendous. Avila is every Tigers fans' favorite punching bag. When looking at the player as a whole, however, you only need to look at two stats. His 36 runners caught stealing led the AL in 2014, and his .327 OBP shows that he gets on base at a higher clip than Adam Jones, Torii Hunter and Ian Kinsler. Avila has real value. Caleb Joseph is probably a nice guy for all intents and purposes, but he can't hit worth a lick. He did, however, throw out 40% of basestealers this year, so at least he has that going for him.

Easily the closest competition, both Martinez and Cruz have had arguably the best season of their respective careers. Cruz has helped to resuscitate a lineup that is missing Manny Machado, Matt Wieters and Chris Davis. His powers numbers are phenomenal and he has been getting on base at a high percentage. He will probably see some time in left field, where is glove is suspect, but Tigers pitchers (especially Justin Verlander) need to zero in on Cruz as someone to not let beat them, because he will. And then he will make childish gestures in the dugout and piss me off. Sorry, can't let it go.

With all of the begrudging praise I have for Cruz, Martinez has been even better. When you take a closer look at what he has done in the middle of the Tigers lineup, you could make a case for American League MVP. He won't be given the award, and he probably shouldn't anyway, but his .409 OBP to go along with 32 home runs is impressive. 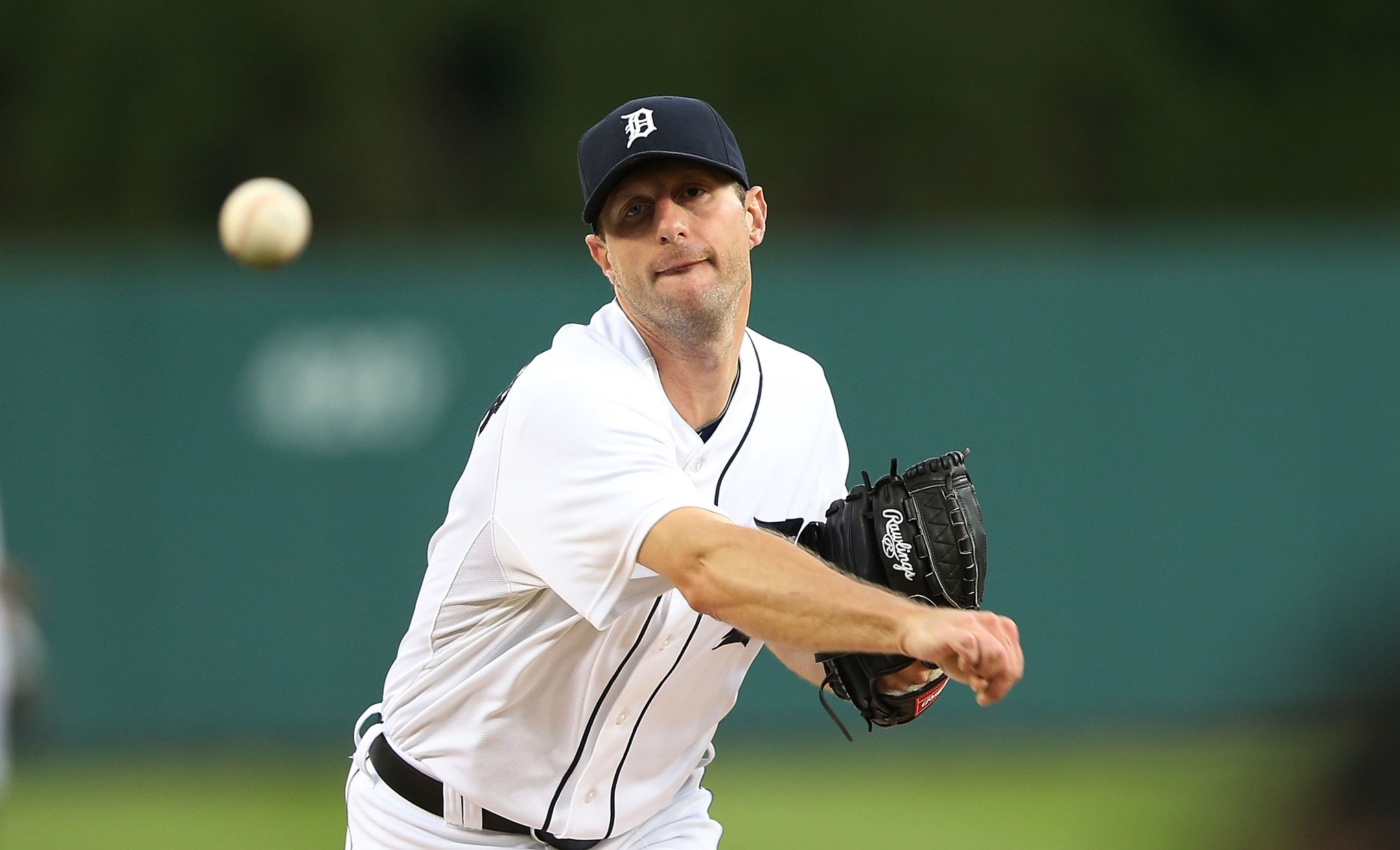 The gap between rotations is much closer than you might expect. The Tigers have the last three Cy Young award winners at the front of their rotation, but the Orioles have quietly put together one of the best starting pitching cores in all of baseball. Justin Verlander has been pitching much better of late, so he may be the catalyst in an otherwise close divisional match-up. Max Scherzer and David Price are key, and if they are sharp it will be very tough for the Orioles to overcome their fire-power. David Price has single-handedly been worth only one win less than the Orioles entire starting rotation. So even though their talent is a close match-up, that stat should put just how dominant the Tigers rotation can be into perspective.

To compare these two bullpens is almost unfair. The Orioles boast one of the best bullpens in all of baseball, ranking second in team WHIP (1.16) and third in team ERA (3.10) in the American League. They have a minimum of four pitchers that have been absolutely lights out. Remember Andrew Miller? All that guy has done this year is strikeout nearly 15 batters per nine innings. While the Tigers' bullpen has been hampered with ineffectiveness all season -- most of which can be blamed on Joe Nathan -- there has been some sign of life recently. Phil Coke has found some of his 2012 playoff swagger of late, and may actually be one of the Tigers more reliable pieces late in games. The question that has to be in the forefront of every Tigers fans' mind is how Brad Ausmus will respond if Joe Nathan struggles early in the series. Remember Brad, Joakim Soria was acquired for a reason.

As baseball fans, we are going to experience one hell of a series. About as evenly matched as two teams can be, every run will be crucial and mistakes will need to minimized. The deciding factor in this series could come down to which bullpen makes the fewest mistakes late in games. Although that would generally indicate the Orioles would have the upper-hand, the Tigers middle of the lineup has a flare for the dramatic.

Anibal Sanchez, who hasn't even been mentioned up to this point, is a huge addition to the bullpen, which will become surprisingly effective in the playoffs. Nelson Cruz and Victor Martinez will both have a huge series for their respective teams, but all bats will be quieted in a good old fashioned pitching duel in Game 5. Tigers win that game 1-0, and take the series 3-2.