The Orioles live and die by the dinger

What's the fastest way to tame the Orioles? Keep them in the yard.

Share All sharing options for: The Orioles live and die by the dinger

The Orioles led the American League with 211 home runs this year, and it didn't really matter to them whether they were in the homer-friendly confines of Camden Yards or not — they hit 107 of those dingers at home and they hit 104 of them on the road, which basically amounts to a 50/50 split. But here's the hitch: they relied on dingers for a whopping 48 percent of their runs this year. That fact deserves repeating on its own line.

The Orioles relied on home runs for 48 percent of their runs scored in 2014.

To put that in perspective, the league average was just 34 percent, and the Tigers came in just under that average at 32 percent (and yet they still out-scored the Orioles overall, 757 runs to 705).

Translation: the Tigers know how to score runs without dingers, and the Orioles don't. The Orioles had the third-fewest walks in the American League, the fifth-highest amount of strikeouts, and the lowest number of stolen bases. For the Orioles in 2014, it was "go yard or go home."

That's good news for Detroit, because their pitchers had the second-best success rate at keeping American League batters in the yard this year (the only pitching staff that did a better job was the Angels).

In head-to-head play, the team that had the most success in keeping the Orioles in particular from launching bombs was ... (drum roll) ... the Detroit Tigers. 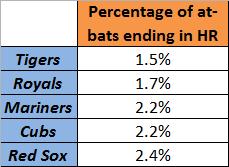 On the other side of the coin, these are the teams that had the most success in hitting dingers against Orioles pitching. 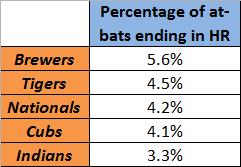 All of this bodes well for the Tigers in this series. When the Orioles don't hit dingers, they don't score, and of all the American League teams, it's the Tigers who had the most success in defusing Baltimore bombs.

It may very well be that the Tigers' regular season record of 5-1 against the Orioles was no fluke, but rather, was the result of a particularly lopsided pitching-versus-offense matchup.