Tyler Collins is a fourth outfielder type who had good power numbers at Double-A Erie. How does that stack up?

Tyler Collins was a sixth round pick in the 2011 draft out of a Texas junior college. See a theme here, guys? If you don't, I won't spoil it for you. Throughout college and into the minors, all Collins has ever done is hit. However, I do have some concerns about his plate approach transferring to the major league level. He's not great in the field either. Overall, Collins is probably a good bench bat or an extra outfielder. He may see the Tigers this year.

I hate doing the team projections. I really do. A lot of guys (Ray, McCann, Verhagen, Collins, Reininger, Fuentes, etc.) are hard to peg. I would rather wait until the rosters for the specific teams come out and dissect from there.

Thanks to MLB Prospect Portal for the video. 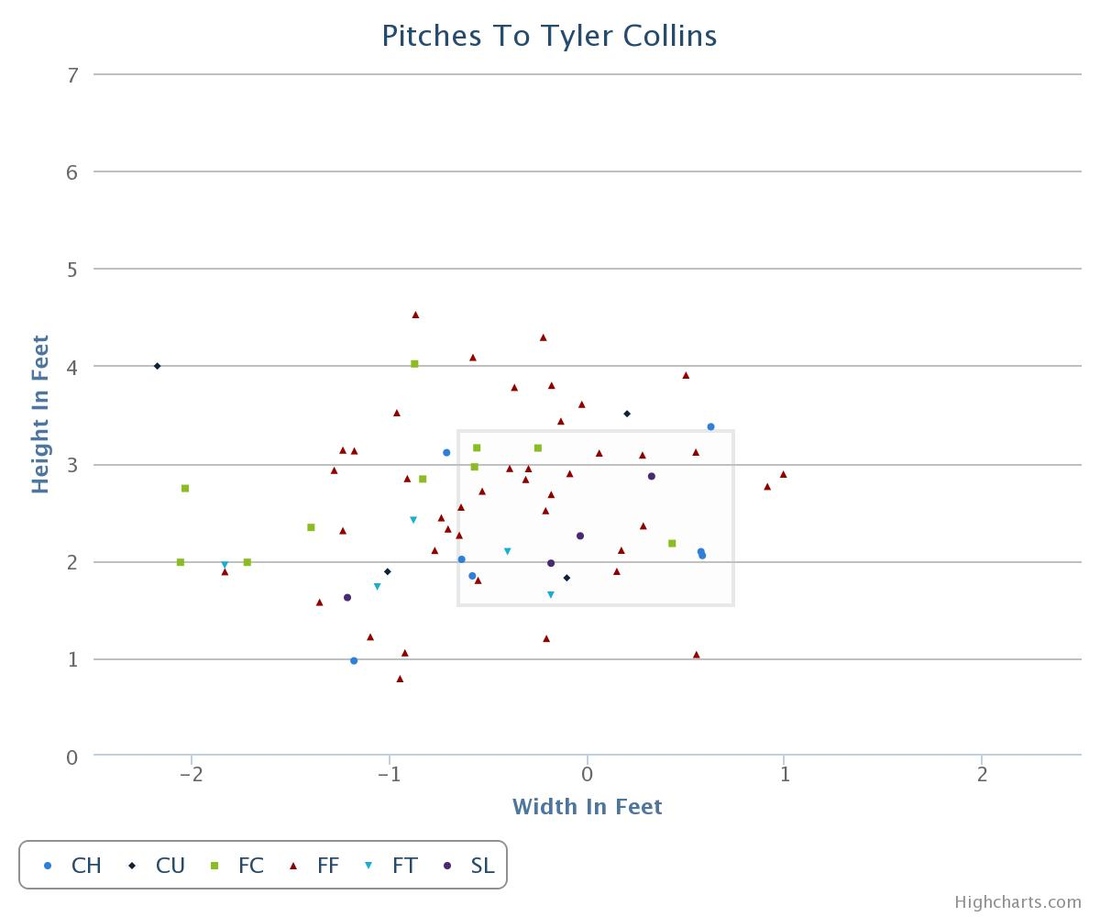 That's how Collins was pitched in the Arizona Fall League. Is it important? Probably not.

It's easy to look at Tyler Collins' Double-A and Arizona Fall League numbers this year and get excited. He walks and had 50+ extra base hits. That's nice and all, but just another example where the stats don't tell the whole story. In reality, Collins was swinging and missing at a very high rate and was cheating on fastballs. He was struggling with pitch recognition. He was mistake hitting. That's fine against Double-A pitchers, and he had a good season. However, in the majors, they make far fewer mistakes and he is going to have to refine his approach in order to hit consistently at the highest level.

Collins is nothing if not streaky. Here are his OPS' by month: .714, .855, .561, .891, .692. In May, he hit six homers in five days. Collins would often hit three or four homers in a week span, and go another month without hitting any. That's just how he is right now, and how most ~.750 OPS platoon/fourth outfield type hitters are. And that's okay. It's just a sign that Collins struggles to adjust in all facets of his game. From at-bat to at-bat, game to game, or week to week, he has trouble making adjustments against opposing team's gameplans against him. While he shows plus power and often goes weeks flashing bat-to-ball skills that could make him a major league regular, I just don't believe in the all bat profile enough to believe he's an every day player.

In the field, Collins is below average. I don't believe he has the instincts or arm to play every day in left field. The bat is certainly the carrying tool here.

After reading this profile, I hope everyone sees why I have been getting angry when people compare Collins to Dirks. They are not similar. Dirks is much better on defense, and has more bat to ball, while Collins has more power. Just because they're both scrappy white guys with extra outfield profiles does not make them the same. This comparison needs to stop.