Daniel was selected in the 2009 draft by the Tigers and given a hefty bonus. He's got plenty of skills, do they translate into an every day left fielder?

This was a breakout year for Daniel. He'd never had more than 27 XBH in a season, this year he had 43. Fields' tools are starting to match his on the field game.

Thanks to MLB Prospect Portal for the video 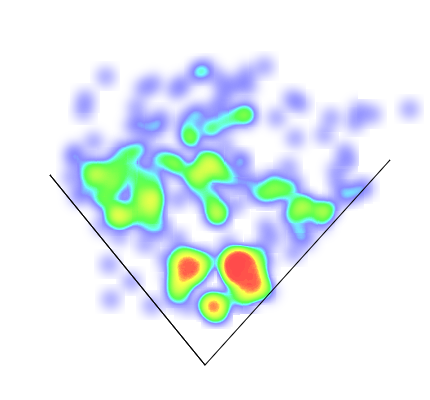 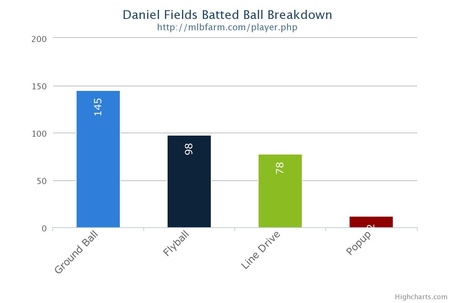 Daniel passed up an opportunity to play at the University of Michigan in order to sign with the Tigers for about 1.6MM in 2009. He was being recruited heavily by other major universities as well, but the opportunity with the Tigers was too good to pass up. In fact, I actually had the chance to play with Daniel in high school on an awesome summer team, where he'd rotate at SS with D.J. Lemahieu or slide over to 2B every once in awhile. Was great to pitch in front of those guys, and the run support didn't hurt either. Dan comes from a baseball family, as most, if not all of you know. His father Bruce, current minor league hitting coordinator of the Tigers and former hitting coach of both Cleveland and Detroit has certainly had an impact on Daniel's game.

After a slew of injuries in 2010 at the lower levels, the Tigers aggressively promoted Daniel to A+ Lakeland as a 19 year old with no pro ball experience. It remains to be seen whether or not that decision helped or hurt his progress, but even for an even-keeled kid, that's an aggressive assignment. Fields hit 240/343/371 and held his own as a boy among men. He really struggled in '11, and bounced back a bit in '12, however 2013 was certainly his breakout campaign. As the numbers show above, it's all starting to come together for Fields.

At the plate, Daniel has an athletic and relaxed looking stance. For some of last year, he had an open stance with a mini leg kick load mechanism. He's also featured a full on leg kick in the past, and went back to it this spring. It's not a big kick, but still a loading mechanism nonetheless, and it's imperative that he gets that front foot down in time. I always try to stay away from leg kicks, especially for young hitters, because there are a lot of moving parts, and it's hard to keep everything in sync and keep the head quiet. Regardless, Fields' resurgence at the plate last year was due to barrel control and more hard hit balls.

As an overall hitter, Daniel can be a bit passive. There's a difference between passive and patient. Brett Gardner is a passive hitter. Miguel Cabrera is a patient hitter. Taking pitches is never a bad thing, but I do have some concerns about Daniel's hit tool profile in general. I have seen him swing through hittable pitches at times, although he can make up for it with his LCF approach. At the major league level, however, I fear that he'd be exploited at this time due to his sometimes passive nature, and inability to hit virtually every mistake offered to him. No doubt, Daniel has improved throughout the years with barrel consistency, control, and accuracy, but he's still got plenty of strides to make in that area to be an every day player. I also worry about him hanging in there vs. lefties (684 OPS last year, 517 OPS in 2012, 540 OPS in 2011), so that probably makes him a platoon guy vs RHP, where he fares much better. In terms of power projection, Daniel has some pop in his bat, but nothing crazy. I'd grade his power around a 45 on the 20-80 scale, which could play up half a tick if the hit tool progresses.

In the field, Daniel has the ability to play all three OF positions, but he's best suited for LF. He can handle CF for now, although I don't know if that holds up for the duration of his career. The reason why I like him in LF more than RF is because his arm is below average. Daniel has turned himself into a solid OF, getting solid jumps and reads on balls, and typically taking good angles. In LF, he's easily athletic enough to be a plus fielder at that position, especially if you take a look around the league and realize that most LFs aren't very good defensively. Fields has good speed, especially by major league standards, and he should be good for double digit steals at the major league level, depending on playing time, of course. His jumps and base running instincts are also solid, and he should fit right into the Tigers new aggressive base running plan when he cracks the big league squad. He's not a burner, but definitely can swipe a bag or two, and easily make it to third on a single from 1B.

All in all, I like the direction in which Daniel is heading. he's on the upswing, and has been improving year to year. Fields has a 4th OF profile for me, but could be an effective one, especially on a good team. He has the tools to contribute to a major league roster, however, I don't believe he's ready at this time. Fields is slotted for AAA this season, and more reps in the minors aren't a bad thing at all. There's the possibility that he's ready later in 2014, and I do believe he'll see some time with the big club come September, but he should be ready to compete for an extra OF spot in 2015, depending on roster construction of course.

Thanks to Hueytaxi for the photo