Verhagen was promoted from High A to AA this year, and is yet another physically imposing pitcher. Can he use his secondary stuff to hold down a rotation spot?

Verhagen enjoyed some statistical success in 2013 by limiting hard bit balls in play, even though he struggled to miss bats. His power sinker was too much for minor league hitters to handle.

Thanks to Jay Chipman for the video 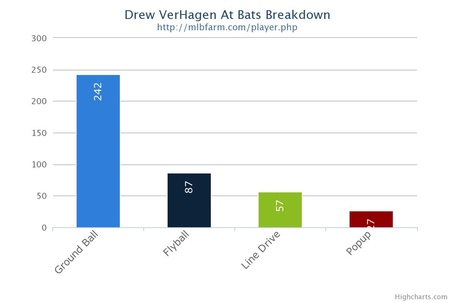 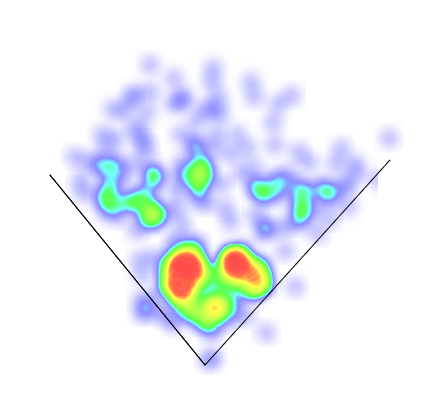 Something should jump off the screen at you here. Verhagen is a ground ball specialist. In the heat map, and the chart above, it's easily apparent that the big, Texan born RHP induces ground balls at an extremely high rate. Picked out of Vanderbilt in the 4th round of the 2012 draft, Verhagen offers what the Tigers love: a big, right handed SEC power arm with the ability to eat innings. Listed at 230, Verhagen is all of that and probably more, with massive, thick legs, and wide, broad shoulders with long limbs. He's still got a ways to go before he's major league ready, but it's looking more and more likely that Verhagen will be a big leaguer. In what capacity? Well, that's a good question.

For a guy that doesn't generate much 'tilt' with his delivery (he's more rotational than linear, although it's not always an agreed upon concept), Verhagen gets his fingers over the ball, and generates some excellent plane with his fastball. He works in the 91-95 range, mostly in the low 90's, and the fastball is his predominant pitch. I'd wager he throws it 75% of the time, maybe even more. It's got plenty of late life and movement, and similar to Melvin Mercedes' fastball, it's a bowling ball of a pitch, meaning that if you don't square it right, it's going to be weak contact. Verhagen's sinker is one of the best overall pitches in the Tigers system. He breaks plenty of bats, and often allows 37 hoppers and worm burners for easy outs. While Verhagen doesn't miss many bats at this point in time, he certainly misses barrels, and that's equally as important.

When watching a Verhagen start, the first thing I notice is that hitters never seem to get a good look at him, and rarely have a comfortable at bat. As I mentioned before, he elicits weak contact frequently, and that's definitely apparent, as his BABIP is only .250, very low for a ground baller. BABIP can be misinterpreted if you don't know what you're looking at, especially at the minor league level. It's important to take these numbers with a grain of salt, however, this low number been a trend so far in Verhagen's career, and if he continues to spot his fastball, I don't see any reason why that wouldn't continue. There's a difference between a squared up ground balls, like ones that Rick Porcello often gives up, and the ones that are hit off Verhagen at this time.

While his fastball may be his bread and butter, Verhagen is going to have to step up his arsenal in terms of off speed pitches. Plenty of guys have breezed through the minors with a great sinker ball, good control, solid command, and not much else to speak of. That may be the case here a little bit, as both Verhagen's breaking ball and change up lag behind his plus fastball. Drew's change up is a bit ahead of his breaking ball at this time, and he sometimes has nights where he throws the pitch with conviction and good arm speed. On these particular nights, Verhagen has better success, as he can keep hitters off his fastball, and when his change up is going right, it has some nice arm side fade and can even generate some swings and misses. The change can flash major league average potential, and should end up being the second pitch in his arsenal. His breaking ball, on the other hand, is the laggard of the two, and for whatever reason, it seems like Verhagen has trouble generating spin. It's obvious that this is a point of emphasis for the development team, and I think it's something you're going to see Verhagen working on in Toledo this upcoming season. I wouldn't be surprised to see him have a 50/50 fastball/offspeed mix, as it's apparent that he can dominate with the fastball, even against advanced minor league hitters, but that doesn't necessarily help him get ready for the show. Major league hitters can hit a fastball, no matter how fast or how much it moves. If you see a wacky line or two at Toledo this year, that's probably why.

I'm all for letting Verhagen start until he can't anymore. He looks like a guy that could eat innings in the back of the rotation, especially if he refines one of his two offspeed pitches. I'm cool with a fastball change up guy, even if he just flicks occasional breaking balls in there at a 10% rate. He just has to show that he can spin something so that he can change the eyes of the hitter. I've seen a number of people project Verhagen to the 'pen, as a late innings arm who could probably run it up there at 95-96 in the late innings, and that's well and good, but it's a last resort type of a thing for me. He's only 23 years old, and the Tigers have quite a few arms, so there's really no reason to rush anything at this point. Let Drew do his thing and continue to get better, as he should be an interesting follow in the next two seasons.