The West Michigan Whitecaps, known for their zany and calorically intensive foods, have made their 2014 offerings public. Your duty-bound BlessYouBoys bloggers investigate.

Even though the West Michigan Whitecaps, a Tigers class A minor league affiliate, do not yet know any of the players who will fill the team this year, they recently released their lineup. Not the batter order, but a rundown of all the new foods they will be selling at the park this year. For an operation in the lower levels of the minors this lineup can be as critical to their success as the one they put on the field.

Yesterday HookSlide and I disguised ourselves as local media and snuck into the big unveiling. As we consumed undisclosed numbers of beers, they started to bring out trays of food. The first one being the Coaches' Sandwich in honor of the three Whitecaps coaches who hail from foreign and exotic lands such as Australia (Andrew Graham), Cuba (Nelson Santovenia) and Texas (Mike Henneman). 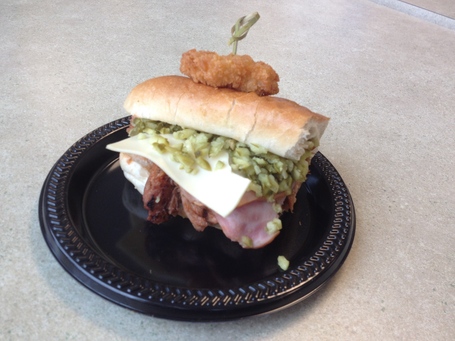 After a couple of complimentary beers (Founder's All Day IPA), the "Coaches' Sandwich" magically appeared in front of me, like something that magically appears. I pulled it apart to inspect the ingredients and found a solid base of pulled barbecue pork, lovingly topped with slices of ham, Swiss cheese, shredded pickles, and a solitary breaded shrimp pinned to the top of the bun with a toothpick spear. I'm sure the shrimp never saw this coming, not even in its worst drug-fueled nightmares.

The use of pulled pork and ham here represents possibility and opportunity, and I certainly hope that future version of this sandwich will also feature bacon, sausage, and a healthy slab of pork chop. Why not get all of the various pig food groups involved? As the old saying goes, "Go big, or go burn down one-third of your stadium."

The ingredients worked well together, with elements of soft happiness and chewy goodness, leaving lingering notes of sweetness from the sauce. I detected faint undercurrents of cedar and sandalwood, but I suspect this is because I accidentally bit into the toothpick spear. My only criticism is that the pulled pork would have been even better had it been warmed, which may very well be the case when this item is served up "live" during a game. I will definitely order this at the ball park. And then I will order it at least two more times before the sixth inning.

Next up was the Tony Gates Venison Burger. This was a typical, boring burger except that it was made from the flesh of something that once ran through a forest and may have had antlers. 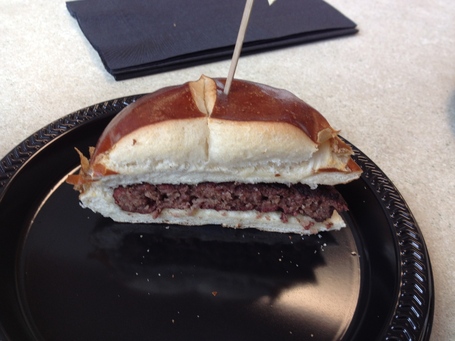 The "Tony Gates Venison Burger" is named after Tony Gates, whom Google tells me is an outdoorsman from New Zealand who recently died. This is strange, mostly because he was actually at the food event, but Google never lies, so I guess I ate this burger sitting a few feet away from an actual zombie. The venison burger was, as the name indicates, a burger made of deer meat, which I assume Tony hunted down personally. It was served on a pretzel bun, and that was pretty much the whole story.

The entire affair was rather melancholy, and it occurred to me that perhaps I should have asked for some kind of condiment with which to adorn the burger - ketchup, mustard, mayo, or maybe some more of the barbecue pulled pork - because the mouthfeel was dry and redolent of early American non-moistened meat. I needed at least two more free beers to help wash everything down, and while the pretzel bun made a valiant effort, it was not enough to save this dish from its inherent drudgery. I mean absolutely no offense to Tony Gates, insofar as he seems like a guy who owns many hunting weapons (may he rest in peace).

Next was the Auger Dogger, basically a giant hot dog wrapped in spiral cut potato and deep fried. Evidently the club ignored all my suggestions as this was the winner of the fan vote. 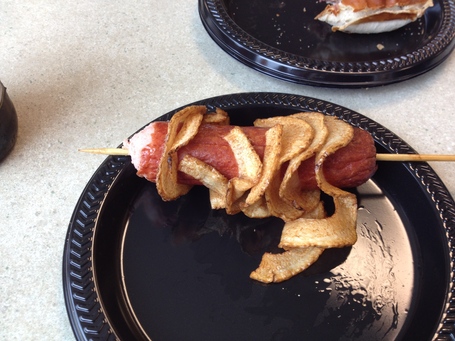 Some kind soul brought me another bottle of beer, followed by the "main event," the food item that garnered the most votes in the annual Whitecaps food contest: the "Auger Dogger." This is a unique item that ... well, it's ... you see, it's supposed to be ... look, I honestly have no idea how the hell this thing won the contest.

It's a hot dog made to look like an auger, which captures the essence of the universal human desire to eat meat which resembles a drilling device. The hot dog is viciously and angrily rammed through a series of thin-sliced potatoes, which give it that famous be-spiraled look that all augers share. The whole thing is deep fried (of course it is) so that the potato slices effectively become potato chips, and the hot dog becomes shriveled looking, as all augers do.

(Perhaps you are thinking I've never seen an actual auger in my life. Perhaps you should not share this information with anyone. My songs know what you did in the dark.)

The dog is served on a long, sharply-pointed wooden skewer, which increases the odds by 1000% that you will sustain a "drilling-related injury" in the process of trying to eat this novelty item. The people of West Michigan have spoken, however, and what they have said is, "we hope you puncture your uvula at some point in 2014." I had to keep breaking chunks of the skewer off in order to safely eat the hot dog, and the fried potato slices kept breaking off in crumbly fragments.

I only ate half of it, then gave up, now slightly more angry and bitter at humankind than I was before I knew about the "Auger Dogger." Seriously, this beat out a "Poutine Burger" in the contest, because [edited] you, West Michigan. We had the chance to be eating glorious burgers topped with God-pleasing gravy and wonderfully warm melted-cheese-drenched fries at the ball park this year, and now we're just going to end up with torn and bloody cheeks. If this experience ever coincides with the Whitecaps getting blown out in a game, some fans are going to find themselves wishing the whole park had burned down.

(This mostly rage-filled reaction may or may not have been influenced slightly by the amounts of beer I had consumed at this point. I can be an angry drinker sometimes. It's not my only vice, just my most entertaining one.)

No minor league food lineup is complete without bacon. Next was the Pretzilla Bacon Cheeseburger. 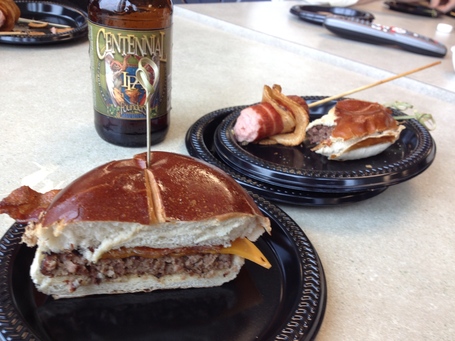 As you can see, I'm starting to fall behind the pace

Let's check in with HookSlide on this one:

I required another three beers to help me forget the "Auger Dogger" experience, and then I found that I had a new item on my plate: the "Pretzilla Bacon Cheeseburger." This was basically everything the "Tony Gates (RIP) Venison Burger" aspired to be. It's a one-third pound hamburger patty (which, honestly, was virtually indistinguishable in flavor and texture from the venison burger) topped with bacon and cheese, then gently, tenderly, sensually ensconsed in a pretzel bun, because pretzel buns are taking over the world. (And I, for one, think it's about time.)

There's not much more I can say about this miracle of perfection, partly because there are no words to describe this beauty, and partly because I'd had approximately enough beer at this point to stun a hearty elk, so my tasting notes read as follows: "ohgashhhits holy frrrup carp tihs is s,o fa9hdla YES cnan't even slarwqd i lvoe evvrythung why ddi tehy tdrade fust foostr shit FISTER ohhi god wehere is m.y seat no dnon,t toch my berb beeeeer ahhhhhh" - which roughly translates to, "Goodness, I thoroughly enjoyed this culinary composition, in all of its rich complexity." 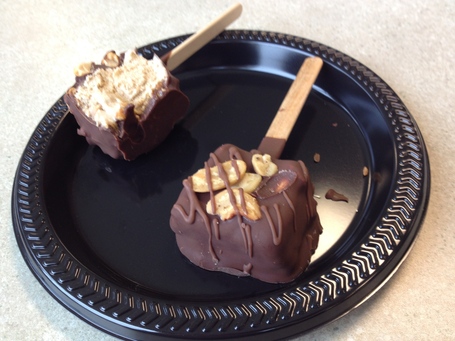 Both of these ice cream bars were amazing, and they put the final nail in my coffin of complete shame and self-loathing as I realized that I'd just consumed two different kinds of burgers, a pork sandwich, half a hot dog ringed with potato chips, two different kinds of ice cream bars, and drowned the whole mess in a river of high-octane beer - all within a sixty-minute span.

And that is what baseball is all about. Good food, good drink, good company, and a sprawling field of diamond-shaped green and brown in full view. I left the event feeling very full, with my taste-buds maxed out on flavor combinations, and my mind wondering what might have one day become of Tony Gates, had he lived. I can't wait until summer is in full swing, and I can go back to the ball park and do this all over again. Except for the "Auger Dogger." That thing can go straight to hell.

There you have it. Big thanks to Mickey, Keith, and Ben for not calling security on us. Be sure to make time to get out to Fifth Third Ballpark this year and watch people stuff their faces.