We love Miggy and are thrilled that he will always be a Tiger. But can we justify his record contract with cold hard analysis?

At BYB we try to strike a balance.  You are a fan who wants deeper analysis than offered in traditional media, and you have a sense of humor, but you are not seeking complex regression analysis.  In the case of Miguel Cabrera's contract, the balance is across articles rather than within an article.  So allow me to push the boundary with a little math.

We understand intuitively that when a team signs a player to a long term deal, they hope that the player outperforms his salary in the early years and understand that in exchange they will likely overpay in the later years.  Let's look at in analytically.  If you do not enjoy math, check out the charts.  If those are intimidating, skip to the conclusion.

The only statistic we will use is WAR, Wins Above Replacement.  While WAR is not without issues, it is useful for modeling value.

We start with the contract, reported to be an average of $31 million per year.  Let's assume the salary is constant over the life of the contract.

Baseball salaries have been on a rapid rise with many teams signing much more lucrative television deals.  The rest of broadcast television is facing a bleak future with video-on-demand, but sporting events are rarely time-shifted.  I was willing to watch the opening game in Australia three hours late to avoid waking at 4 am on a Saturday, but nobody calls my behavior typical.  A study earlier in the off-season pegged the cost of a free agent at $6.2 million per WAR.

A key assumption is how fast salaries continue to rise.  Free agent salaries rose at about 10% per year for the past decade, but we will assume the rate of increase slows to 5% per year.

Miguel Cabrera was worth 7.2 WAR per season from 2011 to 2013, averaging FanGraphs' and Baseball Reference's data.  We will set that as his baseline prior to 2014.

Miguel Cabrera has improved with age, but at some point must decline just like all the great ones.  We will assume his WAR decreases at 10% per year, including 2014.

The last column, surplus value, attempts to calculate how many millions Cabrera is worth beyond his salary, or if negative how much he will be overpaid.  One way to decide if the contract is fair is to add up the column and see if the result is near zero.

Let's consider only years 2016 to 2023, because Cabrera was already under contract through 2015.  Those are the middle eight years of this twelve year contract.  The last two are option years, but they are triggered by performance so let's leave them out.  And let's simplify this with a chart of his projected value, in millions of dollars. 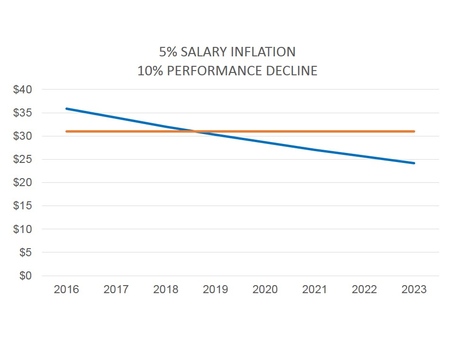 The blue line is Miggy's value from the above table.  The orange line is his salary.  On the left side these form a triangle where the Tigers receive value above Cabrera's salary, and on the right side another triangle where regret sets in.  If the triangles are the same size, the contract is fair.  With the assumptions above, it looks like the Tigers paid too much. 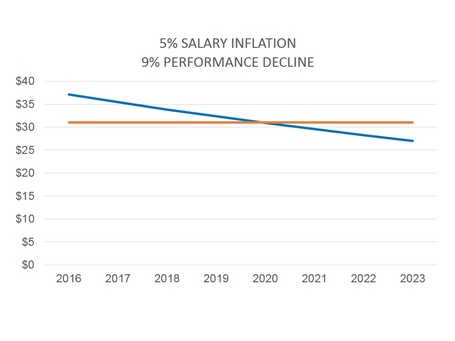 Now the contract favors the Tigers.  For single digit assumptions, the difference between salary inflation and Cabrera's decline needs to be under 5% for him to be underpaid.

What if salaries grow at 10%, while Cabrera declines at 12%?  Miggy is then an average ballplayer at age 40, and the Tigers come out ahead. 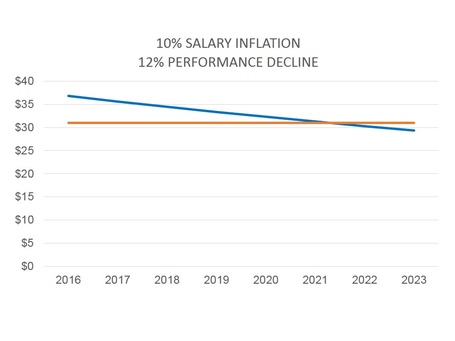 But a 20% annual decline means that Tigers overpay by $100 million!  And Miggy is still producing nearly 1 WAR at age 40. 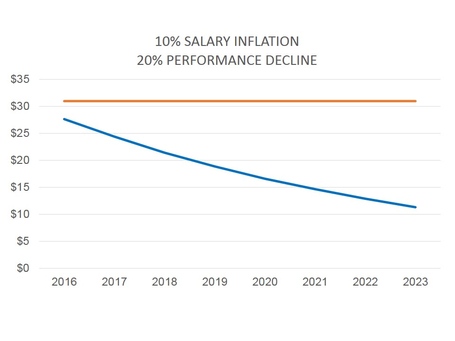 Cabrera has 54.6 bWAR through 2013.  With a 10% decline, he adds 46.5 through age 42 for a total of 100.  That decline still has him producing 2.5 WAR at age 40.  A total of 100 would be 21st all-time, ahead of George Brett, Al Kaline, Roberto Clemente, and Cal Ripken but behind Joe Morgan, Mike Schmidt, Frank Robinson, and Mickey Mantle.  To even be approaching the top ten position players would require a decline of 4% and would mean 4.4 WAR at age 42.  Miggy does things that do not seem possible, but being an All Star at 42 is beyond even his reach. Thus I lean to the 10% average decline, though lower in the early years and higher in the later years.

There are all sorts of simplifications that we made.  Salaries do not increase in a linear fashion.  Baseball innovates and salaries increase faster for a while.  The economy crashes and salaries are flat or even decline.

Wins are not valued the same by all teams at all times.  The Tigers would not have made the playoffs last year without Cabrera, so he provided extra value that we have not included in the analysis.  If in five years the Tigers are nowhere near the playoffs, he will be worth less than the average dollars per WAR.  We have neglected the time value of money, as excess value in the early years is worth more than in later years.  But have you checked the interest rates at the bank lately?

There are even less tangible matters like the value of Cabrera forever being thought of as a Tiger in the tradition of Gehringer, Kaline, and Trammell.  We will not have to incessantly watch a highlight of an injured Cabrera rounding the bases and pumping his arm after a walk-off home run for the Dodgers in the World Series.  And that is priceless.

So we can boil the contract decision down to this.  Do you think salaries will grow at a rate over 5% a year, and that the Tigers will be reasonably competitive for the next decade?  Then give credit to Dave Dombrowski for another deal done well.