Devon Travis had somewhat of a breakout year in the Tigers system. Is he an every day 2B?

I don't think I need to say much, here. Travis absolutely raked between two low levels in 2013. He showed some power, good contact, and a patient approach at the plate.

Here are two videos of Devon. Thanks to Baseball Instinct/MLB Prospect Portal for the videos. I love seeing a hitter from the side. 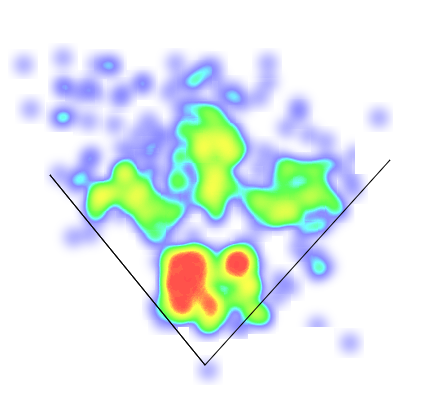 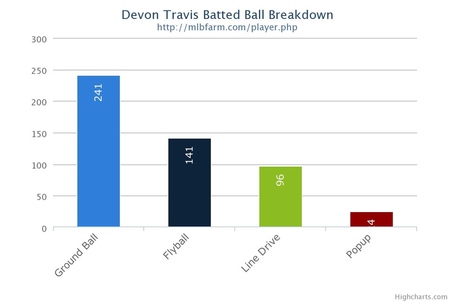 Devon Travis was selected in the 13th round of the 2012 draft out of Florida State. While he enjoyed some success in college, 2013 was Travis' coming out party of sorts. He absolutely destroyed Low A and High A pitching. As a refined player from a big school, that's not terribly surprising, but he showed some pop (48 XBH) and an advanced approach at the plate. Before I get into why I ranked Travis in this spot, let's talk about what he offers on the baseball diamond.

At the plate, Devon gets into a low crouch, and uses a mini toe touch load mechanism, where he brings his hands back at the same time. I think that'll hold up over time, as long as he continues to keep his hands quiet at the load point. Travis has changed his stance since college, and this one seems to be working well for him in professional ball. To be fair, I never saw him in college, and if you'd like to read about his stance, Clint Longnecker has a nice breakdown here. Travis has a line drive swing, and has solid barrel control and swing plane. I have seem him have trouble with premium velocity, especially on the inner half, but then again, no one squares up Robert Stephenson's 98 MPH fastball. Can't really hold that against him.

In terms of projection, he's likely a solid average hitter, maybe a half tick above, with a bit below average power. On the scouting scale, it would be something around a 55 hit 45 power profile at his peak. Travis sprayed line drives all over the field last season, I saw him make hard contact at least once a game. I'm really interested to see how he does at AA Erie this season, and it should be a very good test for his bat. Travis struggled a bit in the AFL after a long year against more advanced pitching, but I wouldn't really read into fall league numbers.

In the field, the word I'd use to describe Travis is 'steady'. He's got below average lateral quickness, but makes up for it with good positioning and an extremely good baseball IQ. Travis is a heady ball player, and was playing at a faster speed than the guys working on their game in both A ball levels. His arm is just around average as well. He had no trouble making plays on the turn, but the throws didn't have that much zip, and would often nab runners by a a step. I'm not putting it in the class of Jhonny Peralta's noodle or anything, but it doesn't add much to his overall profile.

Something that often gets conflated in the minor leagues is that stolen bases=speed. Travis had 22 steals this season, so it's natural inclination to say that he's fast, because he plays MIF and had over 20 steals. In fact, that's not the case at all. I have 4 different times to first base for Travis out of the box: 4.50, 4.35, 4.42, and 4.31. That's below average, or 40 speed on the scouting scale. The way Devon is built, that number probably regresses a half tick throughout his career. Travis stole bases with outstanding instincts, good jumps, and frankly, the catchers in the low minors aren't very good.

Off the field, I have heard nothing but outstanding things about Travis. He was the roommate of Danry Vasquez before moving to Lakeland, and was WMI's team leader. Devon is a hard nosed ball player with a high IQ on the field as well, and was a mentor to younger players in the locker room and during the grind of travel. Being plus, plus between the ears often separates guys with a bunch of talent and no brain, and less talented guys who have an idea of what they're doing.

With all that in mind, I do have some things to say here. I've seen plenty of publications blowing up Travis as the next 2B of the Tigers. In my mind, that's utterly false. In fact, I think that he's 3rd in line behind Perez and Suarez, who could make the transition if needed, considering SS is blocked for the near future. I've also seen some publications list Travis as a potential top 100 prospect, with the likes of some really big, impact names. I've also seen somebody say that Travis is an org guy. I disagree on both counts. He's somewhere in the middle. I understand that trying to prognosticate is a science, and everyone has an opinion. In fact, I respect others in the industry who have been doing this much longer than me, and do an outstanding job. However, I just don't see the justification for a top 100 spot. Travis has one tool that projects to be above average at the major league level. That is not a top 100 prospect. I feel as if people are getting too caught up looking at gaudy numbers, and not really taking context into account.

Let's put the facts on the table here: Devon Travis is older (by about a month) than Hernan Perez, who has seemingly been around forever. In 2013, Perez was tearing up AA, and eventually reached the majors, while Travis was still playing in the low minors. Harold Castro, who I actually ranked a bit higher than Travis, is almost three years his junior, and was playing at the same two levels last season. Of course, Travis had much more success than the 19 year old Castro, but let that sink in. Harold Castro will be Devon Travis' age in the 2016 season. It's really important to make an age vs. level distinction here, and this isn't meant as a slight on Devon, because I actually like what he brings to the table as a high floor, lower ceiling prospect.

Going back to Perez for a minute, let's have a quick prospect showdown. Travis offers a bit more with the hit tool in my opinion, although that could certainly be debated in some circles, he has a more sound overall approach at this point, and the power projection is probably a half grade above Perez'. On the other side of the coin, Perez is a better fielder by almost 2 grades, a 2 grade superior runner, has a better arm, and has positional versatility. He can fake it at SS, could probably handle 3B, and I honestly wouldn't put it past Perez to learn the OF. Travis on the other hand is a 2B only. I'm going to take the guy who can help your team win in a variety of ways and is more versatile. Even if you really, really believe in Travis' bat, I still don't believe that's enough to overcome the difference in virtually every other aspect on the field.

So, there you have it. Devon Travis is an intriguing, low ceiling but high floor, grinder type 2B prospect with a potential above average hit tool and an awesome attitude. I like what he brings to the table, and I could see him sticking around as a second division type, but please, keep the hype under control.

Thanks again to Hueytaxi for the photo.