Every fan should know how to keep score in a scorebook during a game. HookSlide shows you how it's done.

Share All sharing options for: Keeping score at home

Learning to keep score during a ballgame is sort of a "rite of passage," a time-honored tradition amongst baseball aficiandos that developed very early on, when someone had the brilliant idea, "Hey! Why am I sitting here watching this game when I could be nose-deep in a notebook, struggling with a cryptic notation system of symbols and marks that makes Egyptian hieroglyphics seem simple by comparison?"

Score-keeping is a major part of the game, which is why you'll frequently hear game announcers say things like, "Last time up, Birchwanger took a backwards K on a nasty curveball," or, "That'll get 'em out of the inning as Killrally bounces into a simple 6-4-3 double play," or - after a particularly long run-down on the basepaths - "If you're keeping score, you'll wanna make that 2-5-6-2-4-8-6-7-5-3-0-9." (Entering this notation on your mobile device in Detroit markets will immediately connect you to Sam Bernstein.)

I learned to keep score when I was about eight or nine years old, and I preferred to get the starting lineup from Paul Carey, because he took the lineups slowly enough that I actually had time to write down all the names and position numbers. Al Kaline, on the other hand, used to fly through the lineups so fast that I'd spend the next three innings trying to read players' names off their uniforms, because no one had invented WiFi yet.

In the scoring notation system, the first thing you need to know is that each player on the field has an assigned position number, beginning with the pitcher as "1," the catcher as "2," and so on. Here's how it breaks down:

The scorebook contains a tiny square next to each player's name so that the outcome of every at-bat can be notated in such a way that no one actually knows what happened. Or, if you're up for a real challenge, you can do what I do and use a "true scale" notebook, in which each at-bat square is the size of an actual baseball diamond. Be sure to pack about 3,000 extra pencils in reserve if you use this method.

If a batter bounces out to the short stop, this would be notated "6-3" in the scorebook, indicating that the batter is quite tall.

If a batter swings and misses for a third strike, this is notated with a "K," unless the batter is a member of the opposing team, in which case I like to write "OK," indicating that I am happy with this outcome.

If the batter takes a called third strike, you notate this with a backwards "K," which signifies that the batter suffers from dyslexia.

A simple flyout to center field is notated as "F-8," unless it was Sergeant O'Rourke who made the catch, and then you would write "F-Troop" and immediately start complaining about the price of gas these days. If the fielder bobbles the ball, write "E-8," and if the error led to your team losing, also write "F-bomb" in the square.

Successful batting outcomes are notated by checking the appropriate box (or circling the appropriate abbreviation) in the little square, which are typically listed as "1B" for a single, "2B" for a double, "HR" for a home run, "BB" for a walk, and "!$&@%$!" for a walk-off home run against your team in the playoffs. 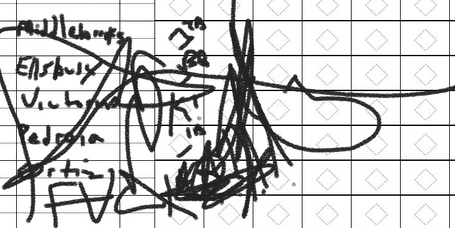 For each base reached, you draw a line from home to first, or from first to second, etc. to indicate how far the batter/runner made it around the bases. If the player scores, you should now have a diamond-shaped outline, which you then proceed to color in, which not only makes it easier to count total runs at-a-glance, but also acknowledges the old custom of ancient times, when a runner would score and then run crazily around the entire infield cheering and insulting the opposing players.

If a player is stopped short, perhaps because he was forced out at third, or caught stealing second, you draw only half-a-line to the next base, then make a short perpendicular slash where that line ends, showing that the player was stopped before he reached the next base, because he ran into a spontaneously-appearing wall. You can also use this notation method when a player hits a home run, celebrates too much, and is confronted by Brian McCann before reaching home plate.

Of course, this is mostly a novelty exercise now. Before there was such thing as televised baseball on digital cable (roughly about the time of the Civil War), keeping score at home was the only way to keep your finger on the pulse of the game, to know how many runners were on base or what the batting count was at any given time. But it's still a useful skill to know even today, especially when you are at a live game and are unable (because of adult beverages) to simply look out at the field and see how many runners are on base. It's also a handy way to keep track of a batter's performance (is he 0-2 so far, 1-3 with a walk, etc.?) during a live game, because scoreboards don't exist yet.

I still keep score during about 40 percent of the season's games, because I want to keep my skills sharp, and also because I firmly believe that there will come a day when I'm at a live game, keeping score of every at-bat, and the stadium's power will fail. The various electronic displays will shut down, I will be the only one in the park who has ready access to the vital statistics of the game, everyone will have to turn to me for this critical information, and I will be considered to be some kind of demi-god from a long-ago age when pencils and paper ruled the earth.

Or, I don't know, people will just fire up their Smart Phones and continue eating nachos.