The Tigers' ace snapped a career long 0-for-26 streak with the first two hits of his career in his 6-2 win over the Padres.

The streak is over! After ten seasons, 38 plate appearances, 29 at-bats, nine sacrifice bunts and 15 strikeouts, Justin Verlander is no longer 0 for his career.

In fact, Verlander is a career 2-for-29 at the plate after going 2-for-3 with a run scored in a 6-2 win over the San Diego Padres.

The fireworks started when Verlander faced Padres' starter Ian Kennedy in the second inning. He smacked the second pitch he saw back up the middle for two out single, ending a ten season drought.

The smile on Verlander's face while standing on first said it all. 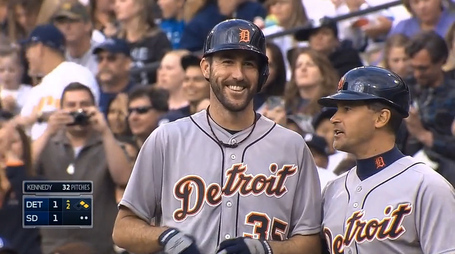 Unfortunately, the first offensive contribution of Verlander's career (that wasn't a bunt) went for naught. The Tigers didn't score in the inning.

But Verlander wasn't done as an offensive force. His opposite field single kicked off a fourth inning rally.

Verlander would come around to score on a two RBI single by Torii Hunter.

On the mound, the Tigers' ace tossed seven innings to earn the victory, allowing two runs on eight hits, striking out a season high eight. Post-game, the only subject anyone wanted to discuss was Verlander's hitting prowess ... including Justin Verlander.

Small sample size be damned, but Verlander is now the Tigers' leading hitter with a .667 average on the season.