How to get Alex Avila out: an explanation of why our catcher can't hit

Share All sharing options for: How to get Alex Avila out: an explanation of why our catcher can't hit

Many fans were hopeful that 2014 would be another breakout season for Alex Avila. A hot second half in 2013 and a strong spring led many to believe that his struggles in 2012 and the first half of 2013 were gone, but 14 strikeouts in his first 28 plate appearances this season is not the start Avila was looking for.

Yes, it has only been 10 games. That is not the point.

One thing Avila garners praise for at the plate is his excellent plate discipline. He has walked in 12.7% of all plate appearances in his career, an excellent rate. Despite a .252 career batting average, Avila's career on-base percentage is .349. His 22.4% O-swing rate -- or the percentage of pitches outside the strike zone that he swings at -- is the 15th lowest in all of baseball among players with at least 1500 plate appearances since 2009. Meanwhile, his Z-swing rate -- or the percentage of pitches within the strike zone he swings at -- ranks as the 156th lowest (out of 243). Avila has a keen sense of the strike zone as a hitter, and doesn't hesitate to take a rip at a pitch in the zone. 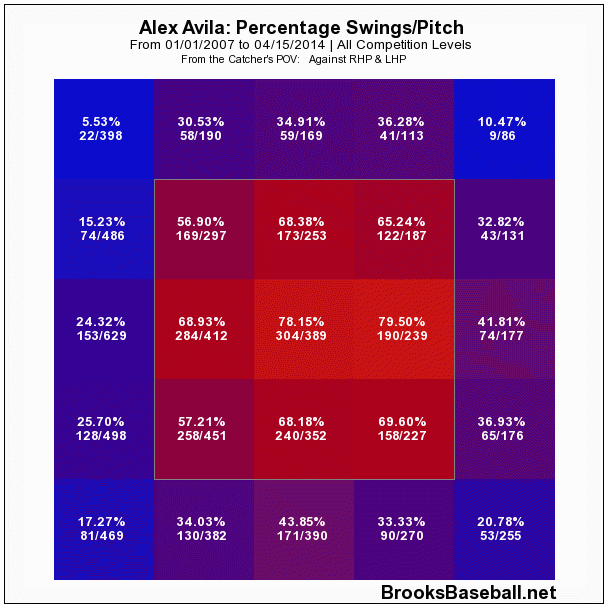 Also fitting into the "things we probably knew already" category are Avila's platoon splits. He is a career .264/.361/.442 hitter against right-handed pitchers, but just a .212/.307/.321 hitter against lefties. His walk rate is slightly lower against left-handed pitching, but at 10.9% for his career, it is not a concern. Meanwhile, he has struck out in 28.4% of his career plate appearances against lefties compared to 24.1% against righties. Both rates are above league average for the entirety of his career, but the 4.3% difference between the two is not significant unless we find an underlying cause for the discrepancy.

To explore this, I looked at Avila's tendency to swing and miss. In particular, I was interested in comparing splits based off of Avila's 10.2% swinging strike percentage. The league average in swinging strike percentage has risen by nearly a full percent over the past five years, but Avila has always come in at higher than league average. Avila's whiff rate is higher against lefties than righties (12.8% to 10.0%), which tends to be a problem for most left-handed hitters. When we look at Avila's whiff rate based on strike zone area, we find another unsurprising trend. 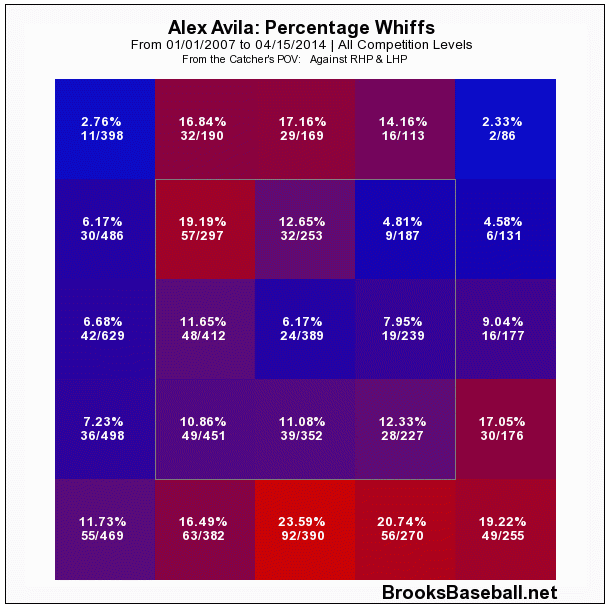 He may have great plate discipline, but when Avila goes to chase, he has a tough time making contact. This is the case for most hitters not named Miguel Cabrera. The hole(s) in Avila's swing do not change much versus right-handed or left-handed pitchers.

Fortunately, I was able to find something new and interesting in this analysis. Avila has a tough time making contact with and driving breaking pitches, no matter which arm the pitcher is using. Here are Avila's whiff rates against fastballs and breaking pitches for his entire career.

Note: for this analysis, I had to do some simple math because Brooks Baseball does not lump pitches into categories when displaying whiff rates. I used the data on this page and combined the pitches into two categories: hard (consisting of the fourseam, sinker, and cutter) and breaking (slider, curve, knuckler, screwball, slow curve). Conveniently, the total number of pitches in these categories equals the number of pitches Brooks uses in its categories, i.e. Avila has faced 4900 "hard" pitches in his career.

It isn't out of the ordinary to see hitters swing and miss more often against breaking pitches, but when we combine this with Avila's previously acknowledged plate discipline and relatively hole-free swing (or so we thought), we see an interesting nugget. 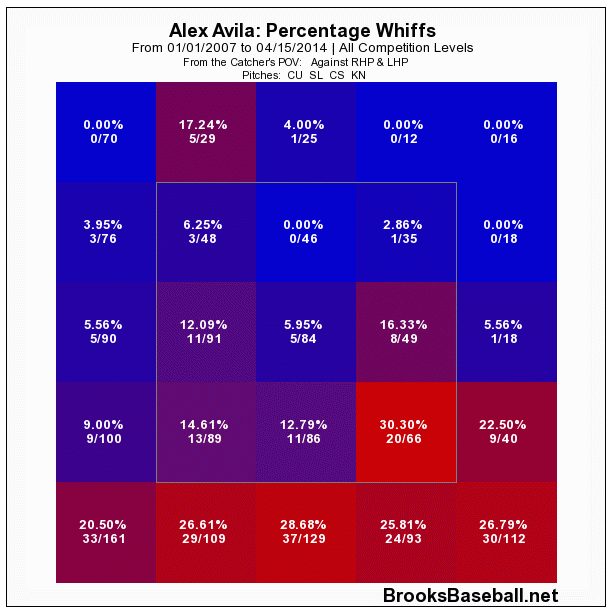 No matter who is pitching, Avila tends to struggle with breaking balls on the inner half of the plate. He sees a slight uptick in whiff rate with breaking balls on the outside edge against lefties, but still demonstrates that hole down-and-in. This inability to hit breaking pitches has led to a career .163 average and .243 slugging average against breaking pitches, while his numbers against fastballs are well above his career norms.