Pimpgate 2011 and the return of Jered Weaver

You remember what happened when Jered Weaver faced the Tigers at Comerica in 2011, right? Let's relive that a bit, shall we?

Share All sharing options for: Pimpgate 2011 and the return of Jered Weaver

In the grand scheme of things, July of 2011 wasn't really that long ago, and yet it also seems like it was forever ago - like, at least three years. That was when Jered Weaver got into a bit of a scuffle with Magglio Ordonez, Carlos Guillen, Alex Avila, and the Tigers fanbase at large.

As Weaver prepares to face the Tigers again for only the second time since Pimpgate 2011, let's walk down memory lane and recall the events.

Magglio Ordonez took Weaver deep in the bottom of the 3rd inning for a 2-run shot that barely stayed fair in left field, but apparently he didn't get out of the batter's box and start his home run trot soon enough for Weaver. Maggs later explained in a post-game interview that he wasn't trying to show Weaver up, he was just watching the ball to make sure it stayed fair. Weaver took it personally, and glared at Maggs for the entire trip around the bases: 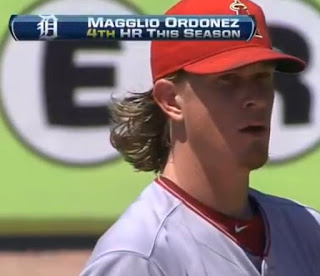 Maggs said, "He was yelling at me to run faster ... So I told him that I'm old – that's as fast as I can run." Carlos Guillen heard it from the Tigers dugout, and wasn't pleased: "I was upset because he was yelling at Magglio when Magglio hit the home run ... [Weaver] was yelling, 'Run, run, you have to run the [bleeping] bases.' Magglio has 13, 14 years in the big leagues. You don't have to yell at him."

A few innings later, Weaver still wasn't ready to let it go. Ordonez flied out in the bottom of the 6th, and on his return path to the dugout that took him across the infield and past Weaver on the mound, Weaver had a few more choice words for Maggs - words that start like this: 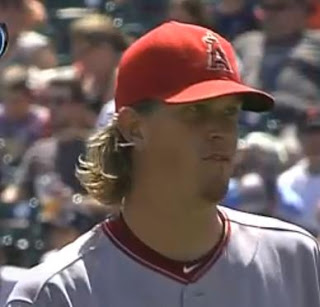 Why Weaver felt the need to curse out Maggs further on a routine fly-out is anyone's guess. He should have let it go after the 3rd inning, but he didn't, and that set the stage for Guillen's retaliation.

In the bottom of the 7th, Guillen took Weaver deep into the right field stands, and this time there was no question that Guillen was intentionally rubbing it in. He gave Weaver a smirk and a stare-down: 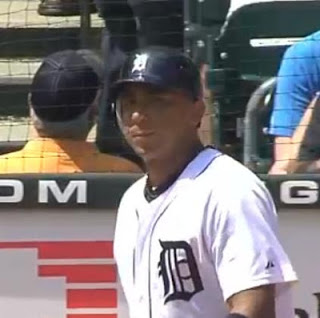 And then proceeded to trot around the bases. Weaver was furious, and the home plate ump quickly ran out to the mound to confront Weaver, and issued a warning to both teams to knock it off. And then Alex Avila came to the plate. Weaver looked to his dugout and nodded as if to say, "watch this": 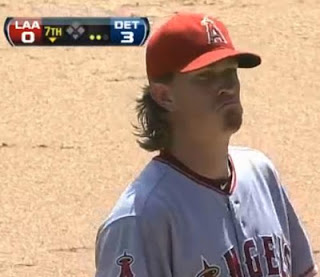 And then proceeded to execute this colossally poopy-headed move: 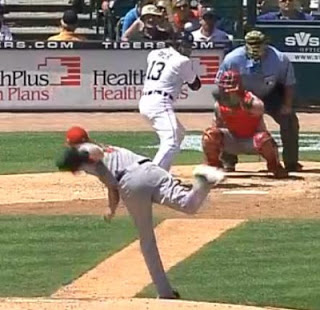 Yes, that would be a fastball, flying directly at Avila's head. Weaver was immediately ejected from the game, and completely came unglued: 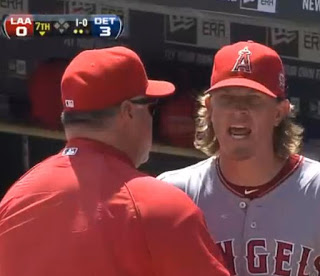 He was later given a six-game suspension.

The last time Weaver pitched in Comerica was last year, and the incident was not forgotten. Jeff Riger reported, prior to that game last year, that Jered Weaver had recently been "voted No. 1 as Detroit's most hated athlete."

Some things have changed since July of 2011, and some things haven't. Ordonez and Guillen are no longer on the team, but Alex Avila and Miguel Cabrera are, and interestingly enough, Avila missed last year's "Return of Weaver" due to being on the disabled list. He'll get his shot tonight.

Another fun fact: Torii Hunter was part of that 2011 game as well, but as an outfielder for the Angels. Ever the straight-shooter, Hunter was quoted as saying after the incident, "That was stupid. It was all stupid. Everybody was stupid."

Will there be fireworks tonight? Probably not. But I think I'm not alone in hoping that Avila goes yard against Weaver at least four times before the game is over.