FAQ on Danny Worth

Danny Worth is back in Detroit, and some people are rightly asking the loaded question, "Danny who?" Those people will still be asking that question after reading this FAQ.

Share All sharing options for: FAQ on Danny Worth

Alex Gonzalez has been released and Danny Worth has been called up from Toledo to play shortstop. Worth isn't exactly a stranger, having played 115 games for the Tigers from 2010 to 2013. Still, he's not as familiar to us as, say, the big box of sunflower seeds in the Tigers' dugout, so now would be a good time to address some questions about Danny Worth. And by "address some questions," I mean, "say nothing of any real value, or even accuracy."

"Don't you dare quote me for your stupid article." -Danny Worth, in a dream I had

Who is Danny Worth?

I just told you, he's a shortstop in Toledo who's going to get some playing time for the Tigers.

Oh, he's a shortstop with the Mud Hens?

I didn't say that. I just said he's a shortstop in Toledo. I think he might be part of a church softball league down there.

We need offense out of that shortstop position - can Danny Worth hit?

In fourteen games this year, he's hitting over .300 with five doubles and an OPS near .750 or so. I feel 100% confident saying that he will repeat this fourteen-game performance in Detroit, although not all fourteen games will necessarily be in the same year.

So you're saying he's not going to be the next Babe Ruth at shortstop?

No, because Babe Ruth wasn't a shortstop.

Ok, so he doesn't have a silver bat, but does he have a gold glove at least?

No, his glove is made of leather, just like yours.

Take it easy! There's no need to speak in all caps. Worth's career MLB Fielding percentage is .993, so he's probably mostly ok in a non-impressive way.

Did you seriously just quote a fielding percentage stat as though it meant anything?

Fielding percentage is the single most accurate way of measuring defensive performance.

Says every play-by-play announcer and color commentator ever.

Do you have anything more advanced on Danny Worth's defense?

Fangraphs says his "Defensive Runs Saved" in any given year is a negative number.

It's all a matter of perspective. Jose Iglesias also has a negative Defensive Runs Saved number for 2013. And according to Fangraphs, Cal Ripken hasn't saved a defensive run in years, so I think we know how useful Fangraphs really is.

Division by zero error. Out of memory or system resources. Close some windows or programs and try again.

How did we get to this point?

Iglesias hurt himself, the Tigers needed a shortstop, they traded Steve Lombardozzi for Alex Gonzalez, and Gonzalez didn't really work out, so here we are.

Yeah, what was the problem with Gonzalez? Is he just too old to play baseball anymore?

Age certainly has something to do with it. I think Dombrowski and Co. got a little concerned when in his last plate appearance, Gonzalez went to the plate with two vultures visibly perched on his bat.

Overall, what can we expect out of Danny Worth?

Let me put it this way. You know how there's that one song on the radio that you sort of like, but you don't even know what band it is, and that's fine with you because you're pretty sure they have exactly one album to their name, and it's not all that great? That's what I expect from Danny Worth.

I don't get the analogy. Talk to me in more modern terms. 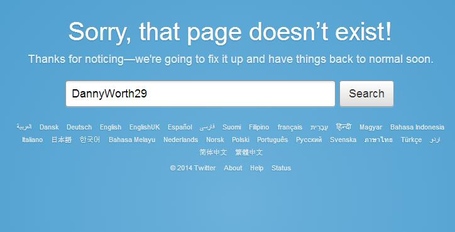 What's the general buzz on Worth among the fans?

That about sums it up. Even when he's getting marriage proposals from female fans, he's still only "close to the best looking Tiger out there." This, too, is our Danny.

Oh great. This team is so screwed, aren't they?

Not even close. Expect to see a lot of Andrew Romine at shortstop, expect to see a little bit of Danny Worth when necessary, and expect the offensive production to come from other positions on the field.

That being said ... get better soon, Iggy.