J.D. Martinez called up to Detroit, Luke Putkonen to the disabled list

J.D. Martinez has been called up from Toledo to Detroit, while Luke Putkonen was placed on the 15-day disabled list.

Share All sharing options for: J.D. Martinez called up to Detroit, Luke Putkonen to the disabled list

The Toledo Mudhens have announced that J.D. Martinez has been called up to Detroit. He has raced off to a hot start at Triple-A Toledo, hitting .308/.366/.846 with 10 home runs in 72 plate appearances. To make roster room, the Tigers placed Luke Putkonen on the 15-day disabled list with elbow inflammation. Andy Dirks has been transferred from the 15-day to the 60-day DL to make room on the 40-man roster.

Who exactly is J.D. Martinez, anyway?

The 26-year-old left fielder has a career slash line of .251/.300/.387 in 975 major league plate appearances, which is actually a pretty good chunk of time. Against left-handers in his career, he carries a .751 OPS, and the Tigers are due to face quite a few in the coming week. Martinez has plus power, as evidenced by his 10 bombs in only three weeks at Triple-A Toledo. He was once a highly touted prospect in the Houston Astros system, and has absolutely eviscerated minor league pitching to the tune of a .942 OPS in six seasons.

Martinez can certainly hit a fastball, but he struggles with off-speed pitches and spin. According to PitchF/X, Martinez has only hit .253 with a .350 slugging average against breaking balls, and has been held to a .193 average and .352 slugging against offspeed pitches (change ups, splitters, etc). He often expands the zone at the plate, including a lofty 35.6% out-of-zone swing percentage in 2013. According to Baseball Savant, most of his swings and misses come down-and-away against right-handed pitching, and down-and-in against lefties. This is a good indication that he will be challenged as such in the big leagues.

I would not call Martinez a "Quad-A" player just yet, as he's still only 26, but he will definitely have to make adjustments at the plate. At the very least, he can mash against left-handed pitching and play sparingly against righties. The Tigers will hope that he runs into a few homers with his plus power. 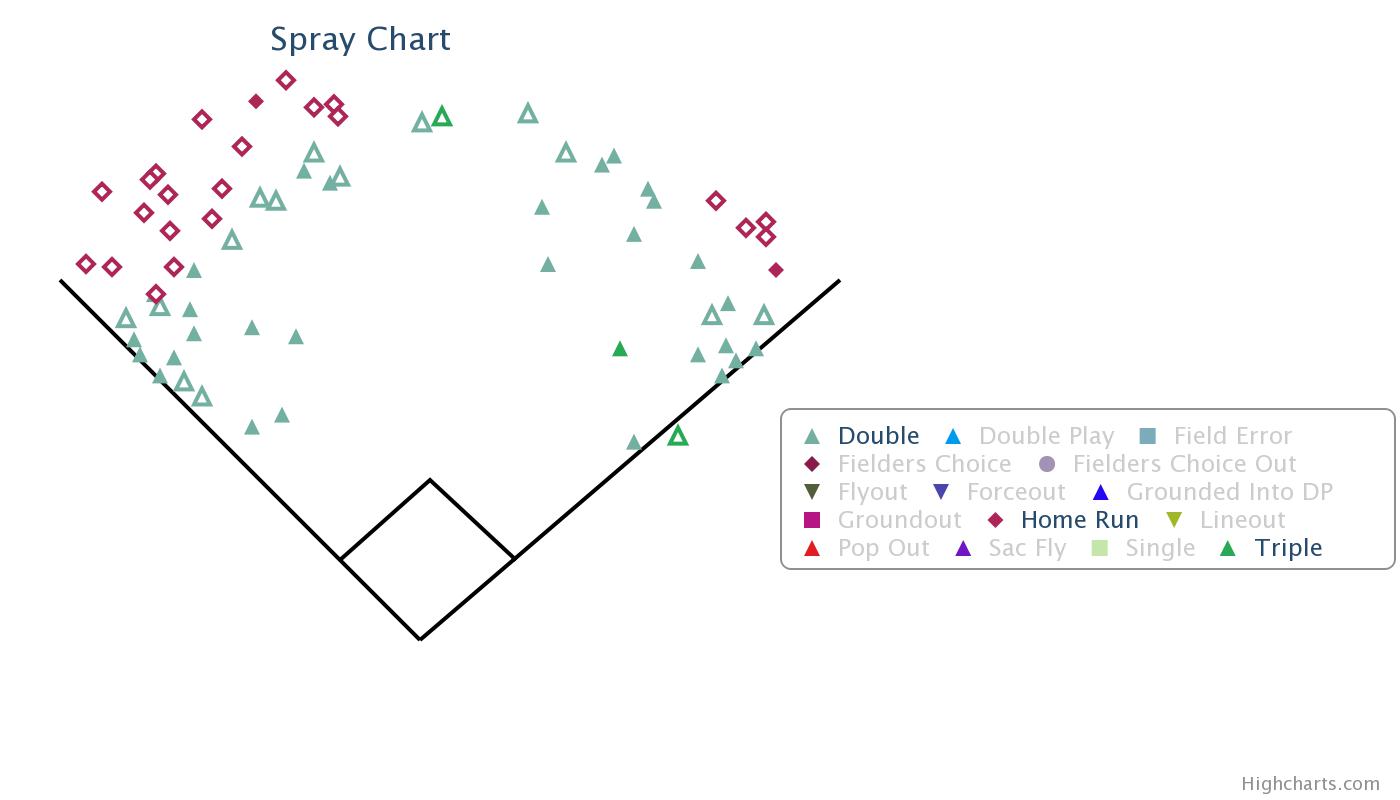 As you can see here (thanks to baseballsavant.com) most of his power is to the pull side.

In the field, Martinez... well, he has plus power at the plate. How can we put this charitably? Defensive metrics (and the eye test) are not kind to his fielding prowess. The Tigers did not call him up for his glove, and it seems that they are willing to put up with some poor fielding if Martinez can hit a few bombs (Ed.: Like this one!).

All in all, this is not a Brad Eldred situation. Martinez has legitimate talent, and even though he's not going to be an every day player, should contribute with a few balls in the left field seats for the time being. Plus, I'd be remiss if I didn't include this:

I like JD Martinez as a possible platoon partner for Dirks in LF.