Andre Rienzo made 10 starts for the White Sox in 2013, allowing a 4.82 ERA and 5.85 FIP in 56 innings. Things started off decently for him, as he held the Tigers to two runs on four hits in six innings in his second big league start. He held a 3.56 ERA through his first five starts, but then the wheels came off. He gave up seven runs (five earned) in six innings against the Houston Astros to close out the month of August, and served up another 13 earned runs in 19 2/3 innings in September. He tallied 13 strikeouts to 11 walks during the last month of the season, resulting in a disastrous 6.86 FIP.

Part of the reason for his precipitous decline may have been fatigue. Between Triple-A Charlotte and the majors, Rienzo threw 169 innings, a major jump over the 103 1/3 frames he logged in 2012. He handled himself decently during his first turn through the International League, allowing a 4.06 ERA and 3.34 FIP in 113 innings. His slightly elevated walk rate was offset by a low home run rate, something that did not stay consistent once he moved up to the bigs. Rienzo served up 11 big flies in his short stint in the majors, eight of which came at U.S. Cellular Field. This resulted in some major home/road splits for the Brazilian. Away from home, opposing batters hit just .212/.293/.321, though a .236 BABIP on nearly identical batted ball splits may indicate that regression is coming.

Overall, Rienzo's pitching repertoire is not particularly impressive. His fastball sits in the low 90s and he relies heavily on a cutter in the high 80s. Opposing batters teed off on the four-seamer last year, pounding it for a .343 batting average and .614 slugging average. Rienzo's wipeout pitch is his curveball, which he throws to both lefties and righties. He primarily uses it when ahead in the count, and for good reason. Despite some lackluster numbers across the board, opposing batters whiffed on the curve 18.5% of the time and hit a measly .091 against it. He will mix in a show-me changeup to lefties as well, but as the "show-me" tag indicates, it's not one of his better pitches.

Like his first appearance in 2012, Smyly's first start of this season did not last long. That's where the similarities end, however. Smyly was torched by the Los Angeles Angels in his 2014 starting debut, allowing four runs on six hits in just three innings. He had a tough time locating his pitches, and left way too many offerings out over the plate. 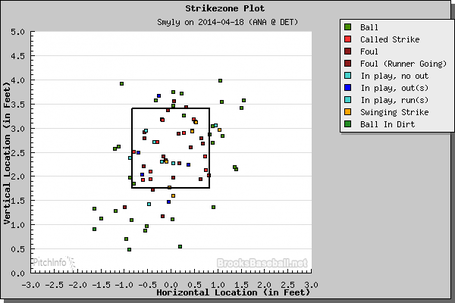 Part of Smyly's struggles -- other than facing an offense that looks like it will be one of the American League's best in 2014 -- likely stem from his low usage so far this season. He had only made two appearances prior to Friday's start, and had not pitched in nine days. The schedule shuffling made necessary by Tuesday's snow-out probably didn't help either, as he needed to shift gears quickly in order to get ready to face another team. I would expect to see a sharper Smyly tonight on regular rest.

Konerko is a scalding 5-for-7 with a home run against Smyly in his career, and is all but guaranteed to be in the starting lineup today despite Adam Dunn's home run off Phil Coke last night. Konerko is just 2-for-19 on the season, but has 45 home runs in 1,002 career plate appearances against the Tigers. Dayan Viciedo is 2-for-4 off Smyly, and is now hitting .361/.412/.525 on the season after last night's 4-for-4 performance. Lefties De Aza and Adam Dunn are a combined 3-for-17 off Smyly in their respective careers, though Dunn has homered. De Aza may still get the start with Adam Eaton sidelined, but Dunn will likely be limited to pinch-hitting situations today.

It is no coincidence that the offense exploded for one of its largest outputs of the season on a night where Miguel Cabrera looked like the Miguel Cabrera of old 2013. Cabrera hit a pitch that was down-and-away out of the park on a night where the ball did not seem to be carrying well to right field. However, the rest of the offense has not made things easy on Chicago's pitching staff, tallying 24 hits and seven walks in the first two games of this series. Their bullpen has also been forced to log eight innings, 5 1/3 of which came last night. The Sox will be counting on Rienzo to give them a breather today. On the Tigers' side of things, will Smyly be able to shake off his rough outing last Friday? If not, tonight's game could be a wild one.

Smyly pitches into the sixth and the Tigers win without any of bullpen hijinx they had last night.