Miguel Cabrera's two-run home run may have been the exclamation point, but Kinsler set the stage with a hard-fought battle the at-bat prior.

When Miguel Cabrera stepped to the plate in the bottom of the third inning last night, Chicago White Sox starter Charlie Leesman already looked defeated. This is not a rare occurrence when pitchers are forced to face Cabrera with men on base, but Leesman's despair was not just because the best hitter on the planet was stepping to the plate. Ian Kinsler had just capped off a 10-pitch at-bat with a double down the third base line, breaking a 1-1 tie.

Kinsler's at-bat was unique in that he has not been particularly patient at the plate so far this season. He is getting on base at a .359 clip, but has only walked five times all season. Prior to last night's game, he was averaging just 3.52 pitches per plate appearance, below the American League average -- and, coincidentally, tied with Prince Fielder. Kinsler's .319 batting average is partially fueled by a .328 BABIP, and probably will not last the full season.

Where Kinsler's at-bat made sense, however, is his propensity for putting the bat on the ball. Kinsler has struck out in just 11.6% of all plate appearances in his career, and has only fanned seven times this season. He does an excellent job of both avoiding bad pitches -- he has swung at just 23% of pitches seen outside the strike zone in his career -- and making contact when he does decide to pull the trigger.

Oddly enough, Kinsler's plate discipline may have failed him a bit in this at-bat, as all but one of the pitches were determined by PitchFX to be outside of the strike zone. I found it interesting that Leesman and battery mate Tyler Flowers seemed intent on pitching Kinsler inside, as something away may have caught Kinsler out in front. This is where the lack of a decent changeup plays a role in a left-handed pitcher's ability to get right-handed hitters out. After two or three inside fastballs, there aren't many righties in the game that would stay back on the changeup in this situation. 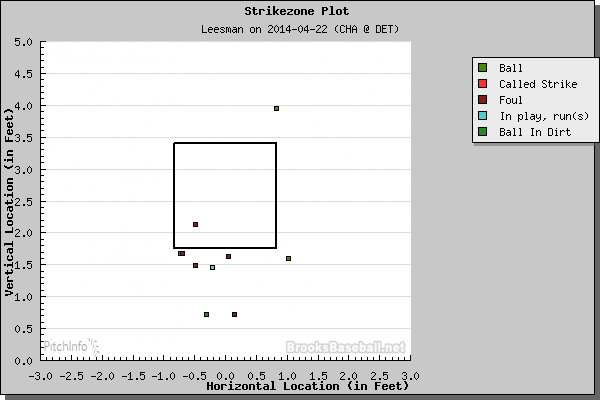 Another interesting tidbit is that Leesman threw nine fastballs in the 10-pitch at-bat, with the only curveball resulting in the foul ball that warranted a replay or two after kicking off of third baseman Marcus Semien's glove. That was one of five pitches Kinsler fouled off during the plate appearance. With a pitch to spare for most of the at-bat -- ball three came on pitch number nine -- another breaking ball could have sealed the deal as well. However, Kinsler got his due three pitches later, lining a fastball below the knees down into the left field corner to score two runs.

With Leesman at least somewhat gassed after the long battle with Kinsler, his 18th pitch of the inning was promptly deposited into the right field bleachers by Miguel Cabrera. Five batters (and another run) later, Leesman's night was over, in no small part thanks to Kinsler's efforts in one of the most pivotal at-bats of the evening.