Today's game could be a pitcher's duel between Jose Quintana and Max Scherzer.

Jose Quintana showed a noticeable improvement from 2012 to 2013, throwing 200 innings for the White Sox while increasing his strikeout rate by 5.4% and lowering his walk rate slightly. He threw more first-pitch strikes, which may have had something to do with an increased O-swing percentage and a slight bump in whiff rate. His FIP decreased more than his ERA, but a 3.7 fWAR season pitching at U.S. Cellular Field is an eye-opener. For that, the Sox gave him a  five year, $21 million contract extension this offseason with a couple of team options stuck on the end. If all goes well -- by that, I mean more of what he did last year -- the White Sox will have seven seasons of Quintana at just $43 million. Kenny Williams is no longer in charge and it's kind of scary.

One thing Quintana did particularly well in 2013 was to generate swings-and-misses with his fastball. He picked up 109 of his 164 strikeouts with the heater, many of which came above the belt buckle. He only averaged 92 miles per hour with the fastball, but did a great job of hitting his spot whenever he wanted to go upstairs. This resulted in some stellar whiff rates, especially with two strikes. 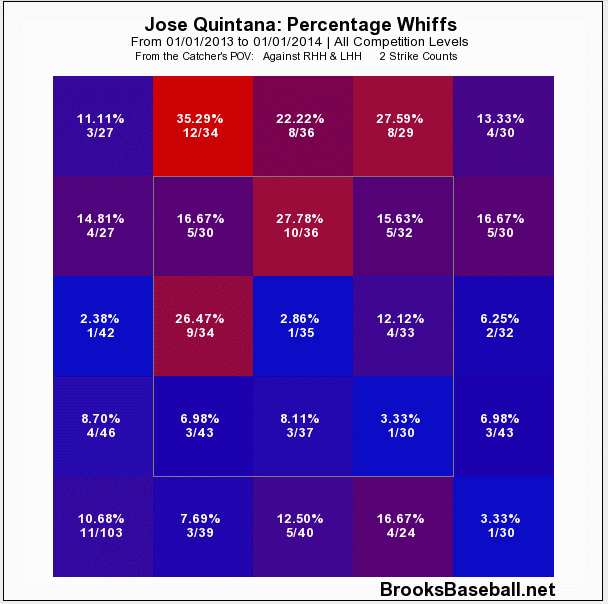 Quintana also throws a curveball, cutter, and changeup, but his fastball is his bread and butter. Even with two strikes, he went to the heater more than half the time last season. He uses the curveball a lot against left-handers with two strikes, and has upped that usage rate so far in 2014. The changeup is primarily saved for righties, but they had no problem turning it around for a .340 batting average last year.

Max Scherzer continued the Tigers' trend of giving up runs in the first inning, allowing a solo home run to J.B. Shuck to lead off the game. After that, Scherzer was dominant, holding one of the American League's best offenses to just two more hits in seven innings of work. He struck out nine, three of which were by all-world outfielder Mike Trout. Scherzer has opened the 2014 season with 34 strikeouts in 27 innings, and has an outside chance at ending today's game with twice as many punch-outs as hits allowed (19 heading into today's game).

Here's the good news: anyone with over 20 career plate appearances against Max Scherzer has a sub-.750 OPS. Admittedly, this isn't saying much, as Scherzer has held the White Sox to a .611 OPS as a team in 18 starts. Ramirez's brutal numbers are a special brand of awful, but Paul Konerko and Adam Dunn have also been silenced by Scherzer, though both have a pair of homers. Viciedo has also homered twice, but in half the number of plate appearances. Conor Gillaspie and Alejandro De Aza have also taken Scherzer deep in their respective careers.

Quintana absolutely baffled the Tigers last season, holding them to three runs on just 11 hits in 15 innings of work. Even with a pair of home runs, they managed a meager .589 OPS off the then-24 year old Colombian. He has established himself as one of the more underrated pitchers in the American League, though early results in 2014 are mixed. Do not be surprised if the Tigers have as much trouble with Quintana as the White Sox tend to have with Scherzer on the hill. The Sox have struck out 25 times in the first three games of this series, and could threaten to hit 40 if Scherzer and the pen are up to the task.

Scherzer and Quintana go toe-to-toe for six innings, but the Tigers offense breaks through in the seventh.