The Tigers completely own the state of Michigan, and a good chunk of Ohio. Let us know what the map tells us about your particular part of the country!

Today, the New York Times released a really cool interactive map that gives a rough look at how the fans of the many Major League Baseball teams are distributed across the United States (apparently the Blue Jays don’t count).

The article describing the map can be found right here, and you can click around to all sorts of cool stuff from there, but what you’re really looking for can be found here. Zoom in, click around, check out your home town.

The data is taken from Facebook, so I'll provide my own caveat; it may not be an extremely accurate representation of fanbase distribution (there’s probably a bias towards younger fans, among other things) but I think this is a good representation. The data is broken down into individual zip codes so what it lacks in accuracy, it more than makes up for in detail. 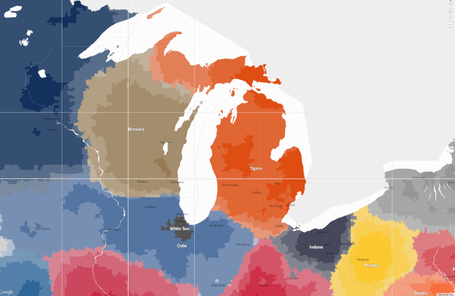 According to the map, the vast majority of Michigan is firmly considered "Tigers Territory." With the exception of a small chunk of the southwest corner of the state (which prefers the Cubs and/or White Sox) and the furthest reaches of the upper peninsula (which prefers the Brewers, but the only beings using Facebook up there are a couple sophisticated yetis), the entire state prefers the Tigers over every other MLB team.

The Tigers have even staked a claim to a good portion of the state of Ohio, with about 45% of Toledo claiming the Tigers as their favorite team. A strong Tigers contingent can even be found south of Bowling Green, and west into Angola, Indiana.

One thing that is difficult to ignore is that some combination of the Yankees, Red Sox, or Cubs come in second and third place almost everywhere in the lower peninsula, with a healthy dose of Brewers in the UP. While it isn't surprising to see the New England duo featured prominently (and it’s only natural for Lions fans to gravitate towards the Cubs), it is still a bit unnerving.

I found the map to serve like a Where's Waldo for baseball fans. See if you can find any pockets of Tigers fans outside of Michigan, or any other unexpected phenomena. One thing I found that deserves congratulations is that Ortonville (48462), Clarkston (48348), and the small area near Macomb Community College (48088) all came in at an 86% concentration of Tigers fans, highest in the nation. Go Tigers!