Porcello went through a rough patch tonight against the Minnesota Twins and was pulled shortly after athletic trainer Kevin Rand visited the mound.

Share All sharing options for: PitchFX Breakdown: What happened to Rick Porcello?

Rick Porcello cruised through the first five innings of tonight's 10-6 win over the Minnesota Twins, allowing a run on four hits with four strikeouts. He had a lengthy stay in the dugout between his second and third innings when the Tigers scored seven runs, but responded by allowing just one hit while facing the minimum over the next three innings.

Things deteriorated quickly in the sixth inning, however. Porcello threw four pitches to leadoff hitter Brian Dozier before Brad Ausmus and head athletic trainer Kevin Rand came barreling out of the dugout to talk to their starter. After a short discussion that left everyone else befuddled, Porcello proceeded to allow a mammoth home run to Dozier, a single to Joe Mauer, and a walk to Trevor Plouffe. Something must have been said during the mound visit, though, because Justin Miller was seen warming in the bullpen shortly after.

One way we can analyze whether something changed with Porcello's delivery is to look at the PitchFX data of his start. Small samples with this type of data are often inconclusive, but there was one interesting nugget. Porcello's velocity dropped off quite a bit over the course of the evening. He sat between 92-93 miles per hour with his two-seam fastball in the first couple innings and was able to touch 95 miles per hour with his four-seamer. In the fifth and sixth innings, however, Porcello's velocity maxed out around 91 miles per hour. 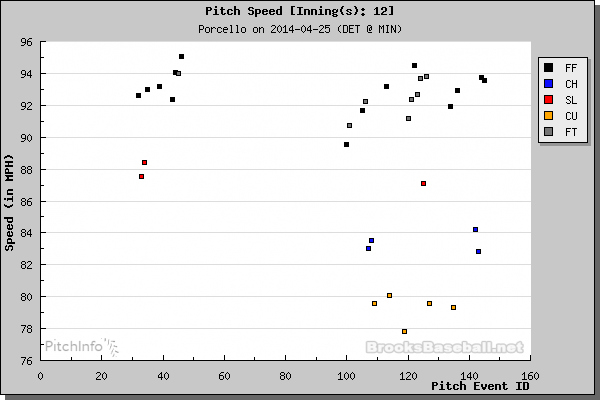 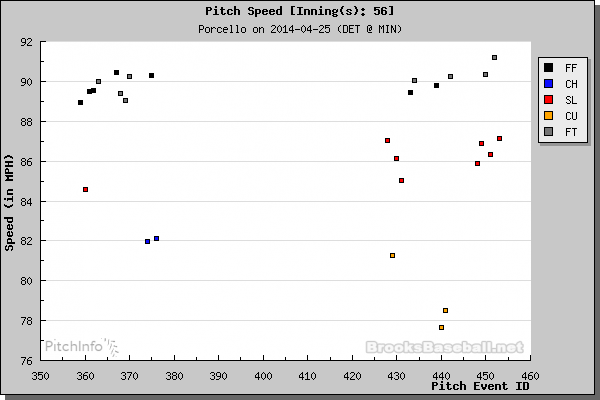 As you can see, Porcello's fastball velocity dipped by a fair amount as the night wore on. Granted, not everyone is Justin Verlander, so the occasional decline isn't out of the ordinary. However, the circumstances of tonight's game -- a long break in between innings on a cold evening -- could have contributed to some sort of stiffness or soreness in Porcello's throwing arm.

The video footage reinforces this hypothesis. In this GIF (Porcello's first pitch of the game), his hips and shoulders rotate almost simultaneously. The arm whips through at a high arm slot, and the entire motion looks fluid and efficient.

Things changed later in the game, though. Porcello's arm slot dropped slightly, and his arm started lagging behind his hip and shoulder rotation. He also seemed to lurch forward and to his glove side slightly more with his follow through, though it's difficult to tell.

There are a number of different reasons why Porcello's mechanics changed so drastically in one start, but my guess is that he was experiencing some tightness or discomfort in his right shoulder. The drop in arm slot takes stress off of the shoulder and displaces it to the elbow, and he could be compensating for this by trying to exert more effort with his follow through.

The drop in velocity demonstrated by PitchFX supports this theory, though it's important to note that this is all guesswork. We may or may not hear anything about Porcello's arm in the next few days, and it's entirely possible that he makes his next scheduled start without any issues.