Justin Verlander takes the mound today at Target Field, a venue where he has had a lot of success in the past.

Share All sharing options for: Game 22 Preview: Tigers at Twins

Kyle Gibson got off to a great start to the 2014 season, allowing just two runs in 19 1/3 innings during his first three starts. He only allowed 12 hits during that span, but still posted a 1.09 WHIP thanks to nine walks. Sure, the .211 BABIP indicated that things would come back to earth at some point, but the screeching halt that was his fourth start was a bit surprising. Gibson got hammered by the Tampa Bay Rays on Tuesday, allowing seven runs on 10 hits in three innings of work. This was the second time that the Rays had beaten him in his career -- he gave up four runs in six innings in a loss to them last July.

Don't be fooled by Gibson's low strikeout numbers. He is not another one of the pitch-to-contact arms that the Twins have been trotting out to the mound for the past decade. He struck out eight batters per nine innings throughout an injury-riddled rise through the minor leagues, and possesses the raw stuff to eventually hold a league average strikeout rate. His fastball sits in the 92-93 mile per hour range, while his changeup, slider, and curveball have all induced whiffs at a 14% clip or better throughout his brief career. Despite a high swinging strike rate on the changeup, lefties have hit .345/.417/.443 against him in his two big league seasons. 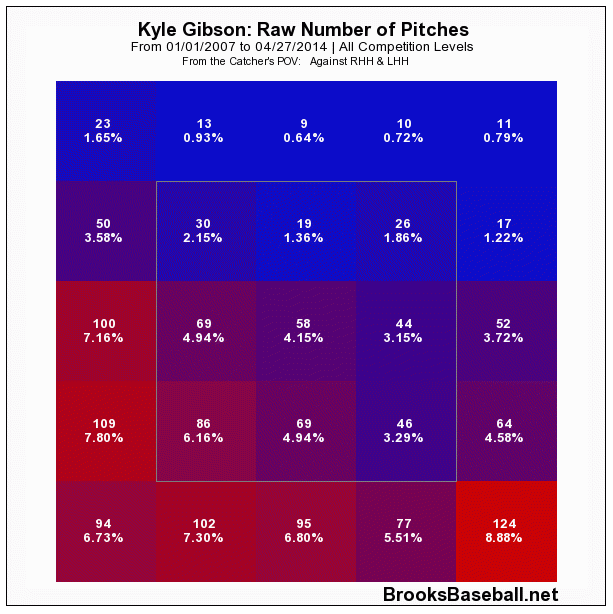 While he has the stuff to generate swings and misses, Gibson has the mindset of a ground ball specialist. He rarely works up in the strike zone, instead choosing to work his two-seamer at the knees. It bores down-and-in to righties, which seems to be much more effective than the tailing action that lefties see. Righties have hit just .215 off the two-seamer during his career, while lefties are hitting it at a .348 clip.

Justin Verlander was dynamite in his last start, holding the league's best offense to just two runs in seven innings while striking out seven. Say what you want about the Chicago White Sox and their ability to keep this early season run going, but Verlander kept them at bay all evening long and looked very much like the Justin Verlander of old. He induced 17 whiffs in 119 pitches, a 14.3% rate. Today, he gets to pitch against a Twins team that he has dominated over the course of his career, especially in their new home. He is 4-0 with a 1.89 ERA in six starts at Target Field, holding the Twins' offense to a .639 OPS.

The most surprising thing about Joe Mauer's stellar numbers against Verlander is the power. Mauer has clubbed three home runs off the Tigers' ace in 62 at-bats resulting in a slugging average more than 100 points above his career norm. Other than that, not many Twins hitters have had much success against Verlander. Jason Kubel is hitting .294 in 49 plate appearances but has not homered, and no one else is hitting above .250 in eight plate appearances or more. Even more telling might be the fact that Verlander has issued 54 walks in 27 career starts against the Twins. Joe Mauer has 12 of them.

The Tigers have never faced Gibson before -- no one on their roster even has a plate appearance against him -- and his tailing two-seamer has been hell on right-handed hitters so far in 2014. That isn't a promising combination, especially when you consider the team's less-than-ideal splits against groundball specialists in 2013. Things are even more pronounced in 2014, though I would imagine that a fellow by the name of Andrew Cashner is skewing those splits a bit. Despite their struggles, Justin Verlander is a whale of a trump card to play, and he has been nigh untouchable at Target Field in his career.

Verlander gives the bullpen a break and the Tigers win their first road series of the year.