Who will take Anibal Sanchez's place in the rotation?

The Tigers will need a fifth starter at some point during Sanchez's stint on the disabled list. Who are the possible call-ups?

Share All sharing options for: Who will take Anibal Sanchez's place in the rotation?

Shortly after leaving today's game in the third inning with a blister on his right middle finger, Anibal Sanchez was placed on the 15-day disabled list. The Tigers will be able to juggle their rotation for the next week thanks to a couple of off days, but a string of 10 consecutive games from May 2nd to 11th -- the day Sanchez will be eligible to come off the disabled list -- will require a fifth starter. The game to focus on would likely be Tuesday, May 6th against the Houston Astros. Let's take a look at some of the candidates to join the rotation.

The most likely choice to get called up is the prize of last offseason's trade with the Washington Nationals. Ray, a 22 year old left-hander, is 2-2 with a 1.93 ERA and 3.20 FIP in four starts for Triple-A Toledo this season. He threw a gem in his last outing, allowing four hits and a walk in 8 1/3 shutout innings with seven strikeouts. He has shown excellent command thus far, walking just five batters in 23 1/3 innings. His strikeout rate is well below the batter-per-inning rates he averaged in the Nationals' system, but he is also very young for the Triple-A level. The Tigers promoted him aggressively, as he only logged 11 starts at the Double-A level last season. 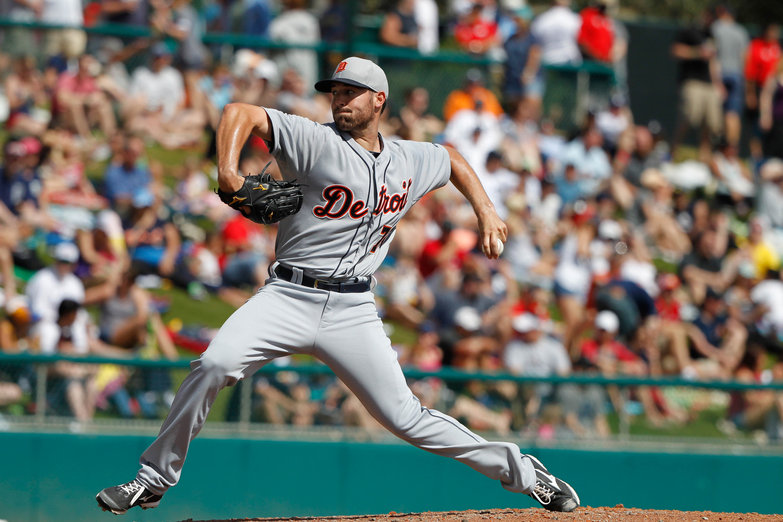 Ray did not appear on any top 100 prospect lists this season, and has yet to appear on our top 30 prospects countdown (hint: it's because he's one of the top two). Baseball America ranked him as the #4 prospect in the Tigers' system, while Baseball Prospectus has him at #3. Many see his ceiling as a mid-rotation starter with a high floor, because lefties who can strike guys out don't exactly grow on trees.

Lobstein is the only starter in Triple-A that is currently on the Tigers' 40 man roster, but his performance this season has left a lot to be desired. He is 0-3 with a 7.84 ERA and 1.92 WHIP in five starts. He was tattooed in a start last night, allowing seven runs on nine hits in four innings. The lone bright spot is a decent 2.86 strikeout-to-walk ratio. Normally, the team would not think to bring up a pitcher struggling this much, but Lobstein is the only possible call-up who would not require someone to be moved off of the 40 man roster.

Lobstein was ranked as the #30 prospect in the Tigers' organization by our own Jordan Gorosh earlier this year. Here's a snippet of what Jordan had to say:

Lobstein has the classic repertoire of a touch and feel lefty. While his overall strike out numbers in the minor leagues are above average, minor league hitters routinely struggle to hit touch and feel lefties at all levels. If you throw strikes in the minor leagues, you're going to get a lot of impatient hitters out with marginal pitches that major league hitters would probably take, or foul off with two strikes. If Lobstein can improve his command profile on the fastball, and continue to refine and trust the change up, he's got a chance to be an innings eater in the majors.

Below was designated for assignment by the Tigers last April, and was claimed off waivers by the Miami Marlins. He spent the majority of his season pitching for the New Orleans Zephyrs, Miami's Triple-A affiliate. He allowed a 2.55 ERA in 74 innings for the Zephyrs with a 1.32 WHIP and 2.52 strikeout-to-walk ratio. Below only appeared in two games in the majors in 2013, allowing three runs in 2 2/3 innings.

Prior to his stint with the Marlins organization, Below spent eight years with the Tigers. He appeared in 41 games for the big league club, allowing a 4.06 ERA in 75 1/3 innings. The 2012 season was the height of Below's career with the Tigers. He appeared in 27 games that season, including a spot start against the Minnesota Twins. He allowed a 3.88 ERA in 46 1/3 innings, but a couple of poor outings late in the year belie how effective he was out of the bullpen that year. He is 2-0 with a 3.79 ERA in four starts for Triple-A Toledo this season, but has allowed 15 walks in 19 innings.

VerHagen is a 23 year old right-hander who is probably the biggest longshot on this list to get called up for a start. He is 0-2 with a 5.49 ERA in four starts for Triple-A Toledo this year. A ground ball specialist, VerHagen has only struck out nine hitters in 19 2/3 innings. He was very effective in 23 starts between Advanced-A Lakeland and Double-A Erie in 2013, allowing a 2.90 ERA in 127 2/3 innings. His strikeout rate was a touch higher last season, but still low enough to make even Rick Porcello blush.

Here's what Jordan had to say about VerHagen, who he ranked as the #12 prospect in the Tigers' system:

I'm all for letting Verhagen start until he can't anymore. He looks like a guy that could eat innings in the back of the rotation, especially if he refines one of his two offspeed pitches. I'm cool with a fastball change up guy, even if he just flicks occasional breaking balls in there at a 10% rate. He just has to show that he can spin something so that he can change the eyes of the hitter. I've seen a number of people project Verhagen to the 'pen, as a late innings arm who could probably run it up there at 95-96 in the late innings, and that's well and good, but it's a last resort type of a thing for me.

Ok, I lied. Robertson is definitely the biggest longshot on this list to get a spot start, but I had to write something that would make Rogo's skin crawl. Robertson made 168 starts for the Tigers from 2003 to 2009, allowing a 4.87 ERA and 4.71 FIP. He is best known for two things: a 2006 season in which he logged a 118 ERA+ in 208 2/3 innings, and shoving as many pieces of gum into his mouth as humanly possible. To his credit, Robertson has pitched well out of the bullpen for Triple-A Toledo this season, allowing three runs in 12 2/3 innings. He has seven walks to six strikeouts, and it's pretty clear that his days as a starter are long past him. Gum Time was fun while it lasted, though.

I will be surprised if someone other than Ray gets the call when the team needs a fifth starter. He has pitched well in Triple-A, and I'm sure the Tigers are excited to see what he can do at the big league level. Even an outstanding performance will not sway their desire to re-sign Max Scherzer at the end of the year, but a good outing could help ease the fanbase's concern about Ray's potential moving forward.