Justin Verlander will make his first start in a week as the Tigers take on Jose Quintana and the White Sox.

Jose Quintana made his last start against the Tigers five days ago and allowed three runs in six innings of work, eventually taking the loss in a 7-4 Tigers victory. It was his first career loss against the Tigers, which isn't surprising considering that the quality start actually elevated his career ERA against Detroit to 3.03. He did a good job of spotting his fastball, except on the first pitch of an at-bat. Quintana threw 13 of 24 first-pitch strikes and only got to a two-strike count against 12 of the 24 batters he faced. Brad Ausmus did his best to make life difficult on Quintana, stacking his lineup with nine right-handed hitters.

One thing the Tigers did a great job of was laying off the high fastball, something Quintana specializes in. They only whiffed on five of 60 fastballs Quintana threw, and six of the seven hits he allowed were off his fastball. It became clear early on that the Tigers were sitting on the fastball, but also forcing him to throw it in the strike zone. He was unable to locate his breaking pitches -- only 15 of 36 off-speed pitches he threw were strikes -- and the Tigers didn't go chasing after pitches in the dirt. 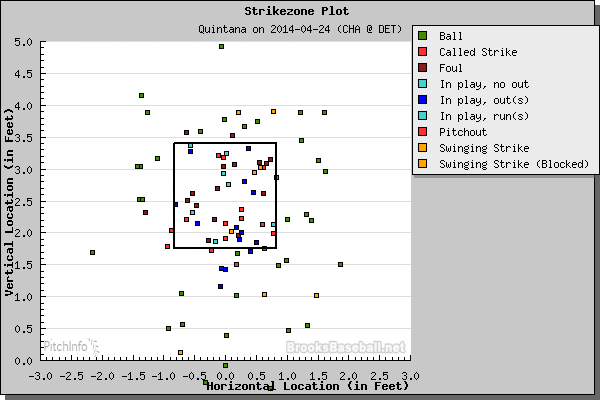 On the other hand, the White Sox were plenty aggressive against Justin Verlander, whiffing on eight pitches outside of the strike zone. They also swung and missed at another nine pitches inside the zone, a big reason why Verlander was able to rack up seven strikeouts in seven innings. He scattered eight hits, only two of which went for extra bases. He continued to be aggressive with using his off-speed pitches, especially his slider. For the season, he is throwing his fastball 55% of the time, a career low usage rate.

The Tigers held Abreu to a modest .250 on-base percentage during their series last week, but three of Abreu's four hits went for extra bases, including two home runs to dead center.

It has to be tough to get into a rhythm when playing so infrequently, but the Tigers have done a decent job of winning what games they have played thus far. Bullpen fatigue isn't a factor tonight, but rust may be, especially on Verlander's part. Tonight marks a full week between starts for him, something you don't often see during the regular season. For what it's worth, he has a 3.13 ERA and averages 6 1/3 innings per start when pitching on six days of rest or more in his career. Offensively, it will be up to Quintana to adjust to the Tigers' disciplined approach. We may see more off-speed pitches early in the count, especially if he can throw them for strike one.