Share All sharing options for: Tigers 5, White Sox 1: Max Scherzer strikes out seven, Bryan Holaday drives in a pair in sweep of Chicago

The Detroit Tigers swept their two game series with the Chicago White Sox, riding a four run fourth to a 5-1 victory. It was the Tigers first road sweep of the season and their first since taking their first two games of the season against their next opponent, the Kansas City Royals.

Max Scherzer won his third consecutive start, shutting out the White Sox over six innings on four hits, striking out seven. The Tigers' bullpen was solid over the final three innings, allowing just a meaningless run with two out in the ninth.

"Anytime you go into someone else's building and come away with all wins you're pretty happy about it." -Brad Ausmus on taking two from the White Sox

White Sox starter and loser Hector Noesi allowed just one hit through three innings. But the recently picked off waivers right-hander was rocked for four runs and four hits in the fourth, and was pulled after 3 2/3 innings.

The Tigers had to make the most of their eight hits, three for extra bases. Victor Martinez doubled, but drove in two runs via sacrifice fly and a walk. Miguel Cabrera and Ian Kinsler each added two hits.

Alex Avila has been sidelined with a back issue, so backup Bryan Holaday is making the most of his playing time. In the lineup for a fourth straight game, Holaday reached base twice, driving in two runs with a double. He finished the series 3-for-7 with three RBIs.

Tyler Flowers drove in the lone White Sox run with a ninth inning single. Dayan Viciedo had two of Chicago's six hits, scoring their only run.

Top of the first and White Sox starter Hector Noesi on the mound, it took an excellent defensive play by center fielder Adam Eaton to keep the Tigers off the scoreboard.

Ian Kinsler on first base with a lead off single, number two hitting Torii Hunter launched a drive to dead center. Eaton robbed Hunter of an extra base hit, crashing into the wall after making a leaping catch. Noesi would get out of the inning without further trouble. 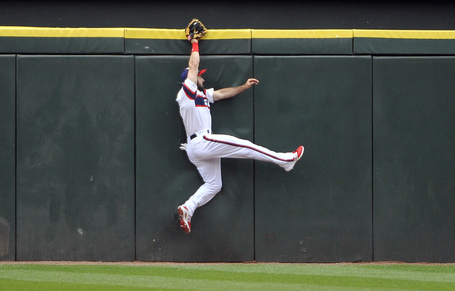 Tigers starter Max Scherzer found himself in first inning, two out jam thanks to Jose Abreu's early season assault of AL pitchers. Chicago's Rookie of the Year candidate muscled a pitch off his fists into the right field corner for a two base hit. Scherzer elected to pitch around Adam Dunn, who reached base via a four pitch true outcome. The move paid off when Dayan Viciedo struck out, ending a scoreless first inning.

Both teams were headed out of town after this afternoon's getaway day game. The Tigers and White Sox treated the second inning as if their buses were idling outside the stadium and leaving in 60 minutes. The Tigers went down in order on seven pitches, the White Sox did the same in ten.

Bottom of three, Scherzer got into more trouble thanks to the bane of pitchers everywhere, the base on balls. Eaton drew a one out walk, then barely beat Austin Jackson's throw to second after he short-hopped Gordon Beckham's single to short center (review quickly overturned the original out call).

Nick Castellanos looked to have started an inning ending double play on Abreu's ground ball, but Kinsler's throw pulled Victor Martinez off the bag, extending the frame. Runners now on the corners, Dunn would earn his second true outcome in as many at-bats, Scherzer striking him out to end the threat.

Entering the fourth, Noesi had set down eight straight Tigers. His second trip through the order wouldn't go nearly as well for the White Sox starter.

Hunter led off the fourth by hitting another long drive, this one to deep right center. Eaton attempted to pull off an other great catch, but his dive on the warning track came up short. Hunter had thoughts of trying for third, but smartly held up at second with Cabrera and Victor Martinez due up.

Miguel Cabrera hasn't rediscovered his power yet, but he's still getting base hits. He bounced a single through the left side, Hunter advancing to third. Martinez then came though with a productive out, his sacrifice fly to center giving the Tigers a 1-0 lead.

J.D. Martinez followed with a line shot double off the left field fence, Cabrera stopping at third. Jackson worked a full count walk, loading the bases for the Tigers' own Rookie of the Year candidate, Castellanos. The rookie hit the ball on the screws, but Alejandro De Aza was able to track the ball down in deep left. But it was good for a run, Cabrera jogging home on the sacrifice fly, the Tigers pushing their lead to 2-0.

BRB, setting up a wall of sandbags to protect against the incoming flood of "make Avila the backup catcher!" comments.

The Tigers up 4-0 and having figured out Noesi, who was no longer throwing his fastball past anyone, Robin Ventura was forced to make a pitching change. Right-hander Jake Petricka shut down the Tigers in his one inning of work last night. He picked up from where he left off, leaving a duck on the pond. Petricka stranded Holaday by retiring Andrew Romine on a ground ball, extinguishing the Tigers' rally.

Just as you want to see after a rally, Scherzer got the shutdown inning. but he had to work a little.

Alexei Ramirez reached base via a one out single, De Aza working a base on balls in along at-bat. As he had all game long, Scherzer would miss bats to get out of trouble. He struck out Tyler Flowers and Marcus Semien to end another threat.

Scherzer had recorded six strikeouts, four ending innings. Fun as strikeouts may be, they also tend to elevate pitch counts. Scherzer's was no exception - 75 through four innings.

The fifth was a throwback to the second. Both Petricka and Scherzer having easy 1-2-3 frames.

Scherzer allowed a one out double to Viciedo in the bottom of the sixth, but kept the White Sox off the scoreboard by retiring the next two batters. After six full innings, Scherzer's pitch count was at 105, so Al Alburquerque was warming up in the top of seventh.

"They did a very good job, and they did it at their (Chicago's) house." -Ausmus praising his pitching staff's performance over the two games

The White Six had made another pitching change to start the seventh. Right-hander Zach Putnam took over from Petricka, setting the Tigers down in order. Since Holaday's double in the fourth, the only Tiger to reach base had been Jackson, who walked with two down in the sixth.

Alburquerque did get the call for the seventh, using his slider effectively in twirling a 1-2-3 inning.

The bullpen parade continued unabated in the eighth. Maikel Cleto took over the White Sox. Cabrera and V. Martinez had back-to-back one out singles. Two down, Jackson walked for a third time to load the bases for Castellanos. There would be no RBI in his second bases loaded at-bat, striking out to end the threat.

Bottom of eight, Joba Chamberlain and his prodigious beard had an uneventful inning, retiring the side in order. Make that four straight scoreless innings for the bullpen while in Chicago. One more solid inning from the 'pen and the Tigers would have a sweep.

Despite not allowing a hard hit ball, Cleto found himself in a bases loaded, no one out jam to start the ninth. He walked Holaday, who was safe at second when Semien's throw  pulled Beckham off the bag on Roimine's ground ball.  Kinsler's bloop dropped in short right, loading the bases for Hunter.

Desperately trying to keep the game from getting out of hand, Ventura yanked Cleto for Daniel Webb.The situation went from bases loaded and no outs, to bases loaded and two out. Webb struck out Hunter and Cabrera, leaving it up to V. Martinez to give Nathan some insurance.

Martinez the Elder didn't mess around with swinging, working a walk to drive in the Tigers' fifth run. But the other Martinez, J.D., went down swinging. Webb struck out the side, allowing the one run on a walk.

The Tigers up were up five runs, not a save situation. So Evan Reed got ninth inning duty.  Viciedo greeted Reed with a liner to the left center field gap for a two base hit.

Reed lost the Tigers' shot at their first shutout of the season when Flowers singled with two down. But that was the end of the bullpen shenanigans. Semien popped up to end the game.

GAME OVER. Your final score is Detroit 5, Chicago 1. The Tigers wrap up a two game sweep of the White Sox.

Thursday is a travel day for the Tigers, who remain in the Central time zone as they wrap up their road trip with a three game weekend series with the Kansas City Royals.

First pitch at  Kauffman Stadium is set for 8:10 PM.

I thought I had traveled back to the 80s before I realized the White Sox had broke out their throwback unis for today's game. 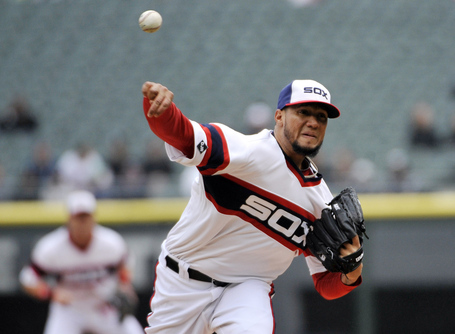 "Let's use those throwup uniforms today." "You mean 'throwback'?" "I stand by what I said."

Thank goodness we weren't exposed to these atrocities...

In the words of a wise man named Frank the Tank, "We're going streaking!":

Victor Martinez: Another game, another ROAR. Martinez doubled, but drove in a pair of runs with a sacrifice fly and a bases loaded walk.

Anyone who proclaimed Miguel Cabrera done: Miggy has a seven game hitting streak and has raised his batting average to .280, a 74 point increase in eight days. The power isn't there yet, but it will be.

Even Reed: By allowing a ninth inning run, the right-hander ruined what had been a perfect series for the bullpen. Before that two out run, the Tigers had gotten four scoreless innings out of their bullpen in Chicago.

GAME 22 PLAYER OF THE GAME:

Bryan Holaday wasn't even supposed to play Tuesday night, and ended up the PotG with 92% of the vote. Forced into the lineup when Alex Avila was scratched with back spasms, the Tigers' backup catcher had a huge game with two hits, a stolen base, threw out a runner and, of course, the game-winning squeeze bunt.