Today, the Tigers will look to play two games in two days for the first time this season.

Share All sharing options for: Game 4 Preview: Orioles at Tigers

Bud Norris was the Houston Astros' Opening Day starter in 2013, but was traded to the Orioles just before the mid-season deadline. His transition to the AL East was not as smooth as the O's expected when they gave up young outfielder L.J. Hoes for Norris' services. He held opponents to two runs or fewer in five of his nine starts down the stretch, but only logged one outing longer than six innings. He struggled with his command, issuing two walks or more in all but one of his starts with the O's, and 24 in 52 2/3 total innings. However, the drop in strikeout rate that plagued him with the Astros early in the year didn't show up in Baltimore, as he fanned over a batter per inning. He made two starts against the Tigers while with the Astros in 2013, including a five-inning, seven-run loss at Comerica Park on May 13th.

Norris primarily relies on a fastball-slider combo, with a changeup mixed in against left-handed hitters. He had one of the highest slider usage rates in baseball last year, ranking sixth among qualified starters at 28.6% according to Fangraphs. Brooks Baseball has him pegged even higher at 34%, which would have placed him third. There is a good reason for all of the punishment on his arm, though. Norris' slider is his only pitch with an above average whiff rate, at 17.5%. Right-handed hitters swung and missed on the slider over 20% of the time in 2013, an impressive feat considering he used it 43% of the time against righties and over 50% of the time with two strikes. Naturally, this has led to some pronounced platoon splits. Right-handed batters hit .241/.307/.322 against him last season, while lefties put up an .889 OPS and hit 16 of the 17 home runs Norris allowed. Norris' career platoon splits are not quite so pronounced, but still significant enough to expect Tyler Collins and Andrew Romine in the lineup today.

The "Rick Porcello breakout season" narrative is well underway, but it seems that a lot of the people on this bandwagon didn't see the big improvements Porcello made last season. He struck out 142 batters in 177 innings -- by far the highest rate of his career -- and posted his best walk rate since 2010. His strikeout-to-walk ratio might have been the fourth-best on the starting staff, but it ranked 12th in the American League, just behind Yu Darvish. Porcello had his off days -- and became a verb in the process -- but also had six starts of seven innings or more with less than two runs allowed.

Perhaps the most encouraging thing about Porcello's 2013 season is that there was not one specific area where he saw significant improvement. For instance, the transition to using a curveball as his primary breaking pitch didn't lead to a humongous whiff rate -- though a 57.6% ground ball rate on the curve helped. The whiff rate on all of his pitches improved from 2012 to 2013, resulting in higher strikeout rates against both righties and lefties. Speaking of platoon splits, Porcello improved against left-handers but still allowed a .358 on-base percentage and .806 OPS. He helped his cause by holding righties to a .603 OPS, down from .725 in 2012. The one "wow" improvement came in a huge jump in strikeout rate -- from 14.4% to 23.4% -- against righties.

Never mind Nick Markakis, who is not to be trusted against any Tigers pitcher. Delmon Young -- yes, the same Delmon Young that owns* the Tigers' playoff franchise home run record -- has eight hits, including two doubles and a home run, in 22 at-bats against Porcello. Delmon was the Orioles' designated hitter in two games of their previous series, but both starters were left-handed. Markakis and Young are two of five O's hitters with an .850 OPS or better in at least 10 plate appearances against Porcello. Adam Jones and Nelson Cruz are two of the heavy hitters in the Orioles' lineup, but are a combined 7-for-38 against Porcello with zero extra base hits.

*He is now tied with Miguel Cabrera after Miggy's solo blast off Sonny Gray in Game 5 of the 2013 ALDS. 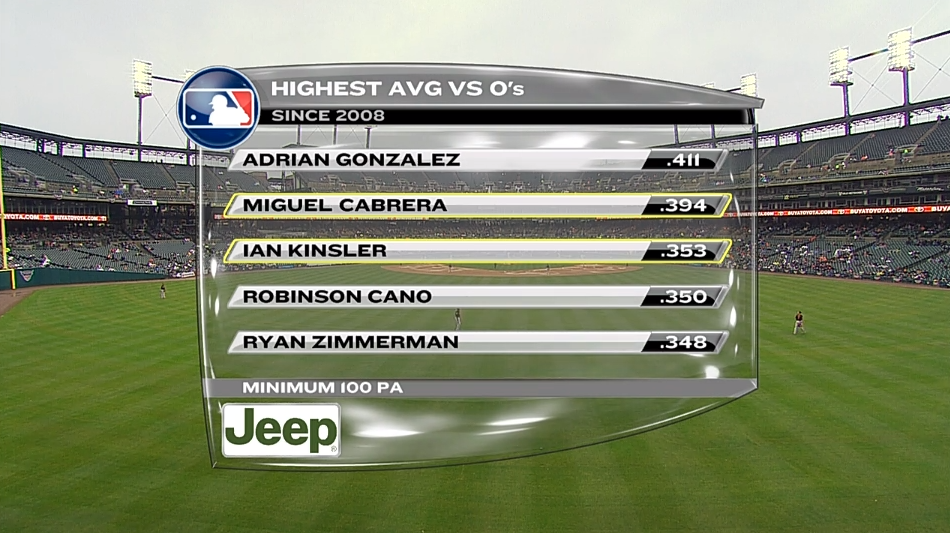 Norris is still under club control for one more season, but it appears that his days as an Oriole are numbered. With top prospect Kevin Gausman (im)patiently waiting in Triple-A -- not to mention Dylan Bundy still lurking -- Norris is basically pitching for his job every time he takes the mound in 2014. Both he and Porcello have pronounced platoon splits, and it will be interesting to see how Buck Showalter and Brad Ausmus construct their lineups. If either of them get too lefty-happy in the middle of the order, bullpen usage could play a major role in determining how this game shakes out. Don't be surprised if Phil Coke makes his season debut today in a tight situation.

Porcello's strong debut gives the Tigers a clean sweep the first time through the rotation.