Torii Hunter continues to defy Father Time, hitting a home run for the third straight game. But it wasn't enough, as a dominant Chris Tillman out-pitched an excellent Justin Verlander. The Orioles end the Tigers' winning streak with a 3-1 victory, taking a textbook pitchers' duel.

The Detroit Tigers entered today's action as the last team without a loss in MLB. The Baltimore Orioles ended the Tigers' undefeated reign with a 3-1 victory, thanks to a marvelous performance by starting pitcher Chris Tillman.

Locked in a pitchers' duel with Justin Verlander, Tillman earned a well-deserved win by allowing just one run on four hits, walking one and striking out five in 8 1/3 innings of work. O's Closer Tommy Hunter recorded the final two outs to nail down his second save of the season.

"Bats cooled a little bit, but that's more to Tillman than anything else." -Tigers manager Brad Ausmus

Nick Markakis had two hits and scored the winning run for the Orioles. Adam Jones and Nelson Cruz had RBI doubles, Matt Wieters capping off the scoring with a home run in the ninth.

The lone Tigers run came off the bat of ageless Torii Hunter. His solo home run in the fourth was his third of the season. DH Victor Martinez added a pair of hits in the losing effort.

Sometimes the other team just plays better. I doubt anyone was going to beat a dominant Tillman today. It's not as if the Tigers were facing a tomato can. The 25-year-old Tillman was 16-7 with a 3.71 ERA in 2013. He's pitching even better to start the this season, posting a 1.35 ERA in 13 1/3 innings.

The Tigers end their season-opening home stand with a 4-1 record It was nice while it lasted, but the Tigers weren't going 162-0 this season. Still, I will take two series wins to start the year anytime. Though the starting pitching looks to be fine and dandy, let's just hope the bullpen issues get sorted out sooner than later as the Tigers hit the road.

Late night interleague play is on tap, the Tigers heading to the west coast for series with the Los Angeles Dodgers and San Diego Padres.

More from our team sites

More from our team sites

Justin Verlander with an economical pitch count? Indeed. The Tigers' ace needed just 19 pitches in his first two innings of work versus the Orioles, including just six in the second.

Orioles' starter Chris Tillman wasn't as efficient, taking 26 pitches to record six outs, but he had topped his opponent in one way. Verlander had allowed one hit, while the Tigers were unable to reach base against Tillman through two.

The pitchers' duel was underway.

The third inning was more of the same, both the Tigers and Orioles going down in order.

Top of four, Verlander pitched himself into a two-out jam, Chris Davis singling, Nelson Cruz taking a base on balls. The mini-threat didn't amount to anything, Austin Jackson camping under Matt Wieters' can of corn to end the inning. Verlander's pitch count remained in good shape at 51, averaging just 13 an inning.

"I'm just riding this bike till the wheels fall off." -Torii Hunter

Torii Hunter's early season power surge finally ended the Tigers' drought against Tillman. One down in the fourth, the 39-year-old took another sip from the Fountain of Youth, then launched a 2-0 fastball into the bullpens in left to snap a scoreless tie. Hunter's third home run in as many games gave the Tigers a 1-0 advantage.

The game still 1-0 in the bottom fifth, Tyler Collins reached third base with two down. After a lead-off walk, Nick Castellanos hit should have been a double play ball on a comebacker to Tillman, but his throw to second pulled shortstop Ryan Flaherty off the bag. Though he was able to retire Castellanos, Collins was safe on the play. The rookie outfielder would advance to third on a Bryan Holaday ground ball, but was stranded when Andrew Romine struck out swinging.

The pitchers' duel rolled into the sixth, Verlander and Tillman going toe-to-toe. Both had allowed just two hits, Hunter's big fly being the difference in the game.

The Orioles' Adam Jones was able to do something rare with one down in the sixth - hit a fly ball over the head of Jackson. Jones hammered a fastball to dead center which just cleared the glove of an outstretched Jackson for a two-base hit, the Orioles' first extra base hit of the afternoon.

Scratch that. Make it two extra base hits and a tie game. Verlander was unable to pitch out of the jam when Cruz's two-out liner found the gap in right-center for a game-tying RBI double.

It had to be Cruz.

Jackson bailed Verlander out of further trouble with a shoestring catch of Wieters' sinking liner, extinguishing the threat.

Verlander was hitting mid-90s on the radar in the inning. But his pitch count was rapidly increasing, ending the sixth at 89. The bullpen would be needed today by the eighth inning. Not a comforting thought after Saturday's near-disastrous ninth inning.

Seemingly not eager to face the Tigers' questionable bullpen, the impatient Orioles had a "blink and you missed it" 1-2-3 seventh. Verlander threw a mere five pitches, which bought him another inning of work.

On the other side, Tillman was rolling. He had retired ten straight Tigers until Castellanos extended the bottom of the seventh with a two-out single. Just make it 10-of-11, Romine ending the inning with a ground out.

As the game reached the eighth, both starting pitchers were still in the game, each having allowed one run on four hits. The pitch count battle was near even as well, Verlander at 94 to Tillman's 91. Doesn't get more even that that.

Unfortunately, Verlander found himself in more trouble with one down. Nick Markakis reached down to line a low-and-inside breaking ball into the right field corner. By the time Hunter got the ball back to the infield, Markakis had himself a triple. Al Alburquerque and Ian Krol were quickly up in the bullpen, Brad Ausmus putting Verlander on a short leash.

The infield was pulled in, but it doesn't help when the ball is hit to deep left. Jones had a nice at bat for the O's, battling back from down 0-2 in the count to drive in Markakis with a sacrifice fly to left. Collins actually made a nice running catch in deep left, but there wasn't a thing he could do, other than toss the ball into the infield as Markakis strolled home.

The Tigers had combined for 17 runs and 30 hits the last two games. Today, that same offense was moribund against an excellent Tillman. Given a 2-1 lead, Tillman got help from his defense to maintain the lead. Davis Lough made a nice sliding catch to rob Romine of a single for the first out, Markakis' diving catch took a bloop single away from Kinsler for the second. Tillman wrapped up a dominant performance by striking out Hunter to end the eighth.

"You're referring more to yesterday. Giving up one run is a non-factor." -Brad Ausmus, when asked about his bullpen

One out in the ninth, the Orioles extended their lead to 3-1 thank to the long ball. Wieters took an Alburquerque fastball the other way, just clearing the left field fence to the right of the 345 mark for his first home run of the season.

Lombardozzi and Flaherty followed the big fly with back-to-back singles, but Alburquerque was able to get out of the inning without allowing another run.

The Tigers had their work cut out for them, as Tillman remained on the mound to start the ninth. Martinez gave the 34,000 in attendance a reason for hope with a one-out double, ending Tillman's day.

Orioles manager Buck Showalter had given his starter a shot at a complete game, but was forced to call on right-hander Tommy Hunter to close out the win. He would do just that.

Jackson went down swinging for the second out. Rather than go with a veteran to pinch-hit off the bench (to be honest, there's not much to pick from), the lefty-swinging Collins was given a shot. There would be no last at-bat heroics today. The rookie bounced out to second, ending a very well-pitched game.

Game over. The Tigers fall to the Orioles 3-1. It was one of those games. Hey, it happens.

To sum up the Tigers' excellent starting pitching on the home stand:

And to sum up their bullpen issues:

Sunday is getaway day, Monday a travel day. The Tigers take to the road for their first West Coast swing of the season. It's an eight-day, five-game trip, two against the Los Angeles Dodgers and three versus the San Diego Padres. Max Scherzer is the Tigers' scheduled starter on Tuesday night. The Dodgers will send Dan Haren to the mound to start the first interleague series of the season. A nap will be in order, as Tuesdays' first pitch in Chavez Ravine is set for 10:10 PM EDT.

Your baseball history lesson for today:

On this day in 1973, Ron Blomberg of the #Yankees became the first DH in MLB history. pic.twitter.com/ofGZg6HULJ

This year the Fox Sports Detroit crew has been making pre-game player of the game predictions. Apparently, they love to troll the fanbase. John Keating going with Andrew Romine today after Mario Impemba picked Don Kelly on Saturday.

Rod Allen had the best prognostication, not that he went out on much of a limb by selecting Verlander.

Mario Impemba with FSD's quote of the day:

More instant replay controversy! Bottom of the first, a long discussion between the umpiring crew and the two teams determined the Tigers' replay system was down for the count. It's tin foil hat time at BYB Upper Peninsula HQ.

Per FSD the replay system is down in Detrtoit. CONSPIRACY TO SLOW DOWN AUSMUS

The O's Johnathan Schoop turned an infield single into an out, assuring his presence on blooper reels in the process, when he bumbled and stumbled his way out of the batter's box on a third-inning swinging bunt. 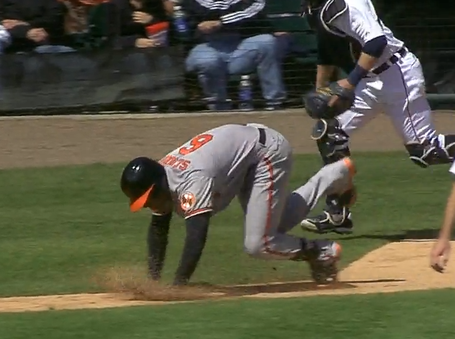 You gotta crawl before you can walk not true in baseball

Torii Hunter went yard in the fourth inning, making it the fourth time he has hit a home run in three consecutive games. The last time Hunter had such a power streak was May 17-19, 2010.

Despite some iffy weather in southeast Michigan, Tigers fans have showed up in droves at Comerica Park for the season-opening home stand.

At this rate, the Tigers will only finish 130- 32. Not sure I can take that many losses.

Justin Verlander: Pitched well enough to win, but wasn't given a safety net by the offense.

Torii Hunter: Supplied all the offense with a solo home run.

Victor Martinez: Two hits, gave the Tigers a shot at a rally with a ninth-inning double.

Austin Jackson: His first bad offensive performance of the season with an 0-for-4 day. Jackson struck out twice after whiffing just two times in the previous four games.

The Tigers' offense: Been feast or famine this season, though keep in mind the Tigers have faced the aces of the Royals and Orioles. Take Hunter and Martinez out of the equation, the rest of the offense was 2-for-24 with a walk and no runs scored. Though Hunter did homer, he also struck out twice.

GAME FOUR PLAYER OF THE GAME:

Torii Hunter's five-RBI day earned him 61% of the vote, carrying him past Don Kelly and Rick Porcello in the player of the game poll.