Share All sharing options for: Game 6 Preview: Tigers at Dodgers

Dan Haren has not been very good for the past couple of seasons. After finishing seventh in the AL Cy Young voting in 2011, Haren has a 22-27 record and 4.50 ERA in 346 1/3 innings for the Los Angeles Angels and Washington Nationals. He hasn't lost his command, walking a combined 69 batters across the two seasons (Justin Verlander had 75 walks in 2013 alone). His strikeout rate isn't the problem either, and a 4.25 strikeout-to-walk ratio is usually a sign of success. So where is the problem? It seems that Haren is simply getting hit harder than normal, particularly as his velocity declined.

Fast forward to 2014, which has been a mixed bag for Haren thus far. He allowed eight runs in 12 innings during Spring Training, not including a six-run tune-up outing against the Angels on the eve of the Dodgers' domestic opener. Haren said that his cutter was the problem, resulting in five extra base hits. Haren appeared to work out the kinks in the next few days, however, and was brilliant in his first start of the regular season against the San Diego Padres. He held the Padres to one unearned run in six innings, striking out six while walking one. His fastball velocity still topped out in the high 80s, but he was able to utilize pinpoint command (and the spacious confined of Petco Park in a couple cases) to keep the Padres in check.

For those expecting regression from Max Scherzer in 2014, consider this: if the season ended today, Max's 7.88 strikeouts per nine innings would be the lowest rate of his career. Other than that? I've got nothing. Scherzer was dominant in his first start of the season, holding the Kansas City Royals to four hits in eight shutout innings. He looked every bit the pitcher he was in 2013, garnering 13 whiffs in 110 pitches. He was around the strike zone all game, including first pitch strikes to 18 of the 27 batters he faced. 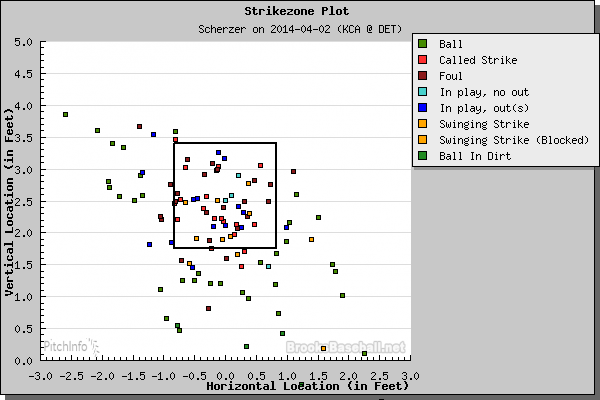 Scherzer made a start against the Dodgers in the Tigers' 2011 visit to Dodger Stadium, but most of his encounters with the current roster came when Max was pitching for the Arizona Diamondbacks. He was knocked around by a Dodgers lineup featuring Kemp, Ethier, Dee Gordon, A.J. Ellis, and Juan Uribe for six runs in six innings, allowing hits to everyone but Kemp. Ethier homered in that game, and is the only current Dodger to have done so off Scherzer. Carl Crawford is 3-for-9 off Scherzer with a pair of triples, while slugger Adrian Gonzalez is a lowly 3-for-17.

Whether or not Yasiel Puig plays tonight -- he strained his left thumb sliding into first base on Saturday -- the Dodgers will field a formidable lineup. Hanley Ramirez and Matt Kemp homered twice on Sunday night, and speedster-turned-bust-turned-second baseman Dee Gordon is getting on base at a 40% clip. Fortunately, the Tigers have a pretty good starting pitcher on the hill tonight, and his past numbers against the Dodgers are all but irrelevant since his breakthrough midway through the 2012 season.

On the other side of the ball, Haren will have to live on the corners against a Tigers offense that has feasted upon mistakes in 2014. It's early, but the Tigers rank second in the American League with an average of 4.08 pitches seen per plate appearance, and first in batting average, slugging average, and OPS. Haren will have the benefit of Dodger Stadium's heavy nighttime air, but the Tigers have shown the ability to score in multiple ways already this season. They may have to get out to an early lead, though; the Dodgers' bullpen -- excluding Brian Wilson, who is on the disabled list -- allowed just two runs in 22 2/3 innings last week.

Scherzer keeps the Dodgers' potent offense in check and the Tigers win their first road game of the year.