Notes from around MLB, April 8

Bryce Harper is striking out a lot, Yasiel Puig hurt his thumb, the Twins are leading the league in an unexpected stat, and what's up, Mariners?

Share All sharing options for: Notes from around MLB, April 8

Cue the music. Ready the graphics. Check the sound levels. And here we go ...

They lead MLB in average runs-per-game at 6.33, but are only third in MLB for RBI's per game, at 5.6. Somebody's cheating somewhere.

They're rockin' a .667 winning percentage, they're averaging 5.67 runs-per-game, Robinson Cano is slashing .391/.500/.478 with a 978 OPS, and they've been in first place since Opening Day. Compared to last year, that's an exponential increase that, when you factor in the binomial tangential multiplier and round to the nearest square root of the cosine fractional, then ... look, here's a simple graphic that explains it: 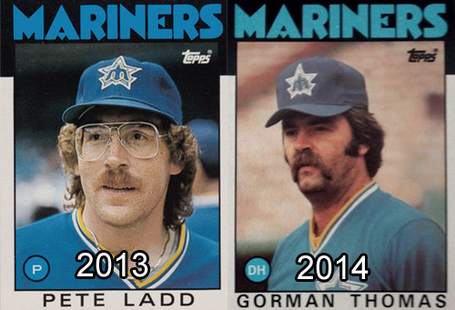 Yasiel Puig is listed as day-to-day after straining his thumb while sliding headfirst into first base last Saturday. He was just two fingers away from setting me up for a really easy joke.

They really need to get the sewer backup issues under control, because nobody should have to walk around in a clubhouse with Josh Reddick's stats collecting in pools on the floor.

As of Monday night, Jhonny Peralta had a .095 batting average and a .555 OPS, because the only two hits he's had were home runs. The reason? Peralta Endorses Dingers.

With the twenty-eighth lowest payroll, they're tied for first in MLB for on-base-percentage (.357), so expect Rowan Atkinson to take over Brad Pitt's role in this year's Moneyball remake.

The offense has 51 total strikeouts, and Bryce Harper is responsible for one-fifth of them, which brings to mind the famous axiom, "There is no 'I' in 'team,' but there is one in 'I really need to work on my plate discipline.'"

After a week of games, Giancarlo Stanton is slashing .345/.406/.655 with twelve RBI's, so it's really only a matter of time before Dave Dombrowski acquires him in exchange for a pinball machine, an incomplete set of 1986 Topps cards, and a prepaid cell phone.

The "Everybody Loves Derek Jeter Tour" finally landed at Yankee Stadium for Jeter's final home opener. Jeter said to the press, "I'll have butterflies before this game starts," which is a pretty disgusting pre-game meal, but whatever, he's Derek Jeter, he can do what he wants.

With the addition of Ubaldo Jimenez to a roster that already included Chris Davis, the O's are a lock to once again win the MLB "facial content to facial area ratio" award.