Max Scherzer has the lowest ERA in the American League. Today, he faces off against Kyle Gibson and the Minnesota Twins.

Share All sharing options for: Game 32 Preview: Twins at Tigers

Kyle Gibson has held opponents to one run or fewer in four of his six starts this season, but has not struck out more than four hitters in an outing. In fact, he has walked more hitters than he has struck out this season. In his last start, he held the Cleveland Indians to two hits in seven scoreless innings, but walked three batters and only struck out one. His ERA took a beating in two starts at the end of April when he allowed 12 runs on 19 hits in 9 2/3 innings.

Gibson is finding success in the early season by generating a lot of weak contact. He has allowed an 18.2% line drive rate that is nearly matched by his 17.5% pop-up rate. He is limiting fly balls (33.1%) and still has yet to give up a home run. The lack of homers helps his 3.61 FIP, which isn't too far off his 3.50 ERA. His 5.04 xFIP (which controls for home run rate) is more in line with his 5.38 SIERA. Given Gibson's high rate of balls in play, SIERA may be the best predictor of what to expect the rest of the season as a whole.

Gibson is not going to go right after hitters. He only throws first pitch strikes at a 57.1% clip, one of the lowest rates in the American League. He tries to work the edges of the strike zone and beyond, which can lead to some ugly swings. Opposing batters have only swung at 27.9% of pitches outside the strike zone, so chasing may not necessarily be the issue here. His strike zone map from his last start does a good job of illustrating what Gibson likes to do: throw strikes with the fastball, and nibble with everything else (check out the blue dot at the way bottom of the chart!). 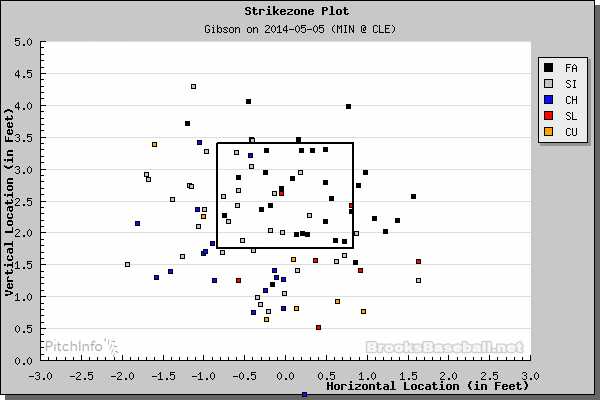 Ho hum, another dominant outing for Max Scherzer in his last start. He held the hapless Houston Astros to three hits and a walk in eight shutout innings, striking out nine. A 19-pitch eighth inning ruined Scherzer's chances of coming out for the ninth inning in search of his first complete game, but that's all we have to gripe about at this point. Scherzer's 1.72 ERA leads the American League, he is striking out more hitters, and he has increased his ground ball rate by a whopping eight percent compared to last season.

Several Twins hitters have had success hitting for average against Scherzer -- five players sport .300 averages or better in limited samples -- but there has been almost no power to speak of. Scherzer has only allowed four extra base hits to players currently on the Twins' roster. Joe Mauer has one of those extra base hits (a home run), but is still unlikely to play due to a low back injury. On the other end, Scherzer has overpowered several of the Twins' younger bats, including Brian Dozier, Trevor Plouffe, and Aaron Hicks. In 26 combined at-bats, those three have struck out 16 times.

It's a scary, scary prospect for American League teams to think that Max Scherzer has gotten better than he was in 2013, but that is the case so far. Scherzer's streak of outings with seven or more strikeouts seems safe as well. While the Twins have the highest walk rate in baseball, they also have the second-highest strikeout rate in the American League. Meanwhile, Gibson represents a bit of a conundrum for Tigers hitters. They have struggled against right-handed pitching, but have fared better against ground ball specialists. Gibson has silenced right-handed bats so far in 2014, so it may be another long game for a Tigers offense that has scuffled on this current homestand.

Scherzer dominates again to improve to 5-1 on the season.