Robbie Ray makes his second career start this afternoon against the Minnesota Twins.

Share All sharing options for: Game 33 Preview: Twins at Tigers

Samuel Deduno's walk rate is in the wrong organization. He has allowed 105 walks in 210 2/3 innings with the Twins, one reason why they have been hesitant to put him in their rotation despite better numbers than many other pitchers on their club. He started the 2013 season in the minors despite dominating in the World Baseball Classic, and began this season in the bullpen before making his first start on May 6th. He allowed a 3.83 ERA in 18 starts last season, the best number by any Twin with over 100 innings pitched.

The one thing stopping Deduno from being a solid mid-rotation starter (if not more) is that he does not miss enough bats. For instance, in 12 starts where Deduno has struck out five batters or more, he has a 2.94 ERA. He struck out 17 batters in 13 innings in the 2013 World Baseball Classic while allowing just one run. When opposing hitters put the ball in play, it's usually on the ground. Deduno has induced groundballs at a 58.2% rate in his career, resulting in a .215 average. He also does a good job of limiting home runs, in large part because he keeps the ball down in the strike zone. Few pitches get elevated, resulting in a low fly ball rate. He still has yet to allow a home run this season. 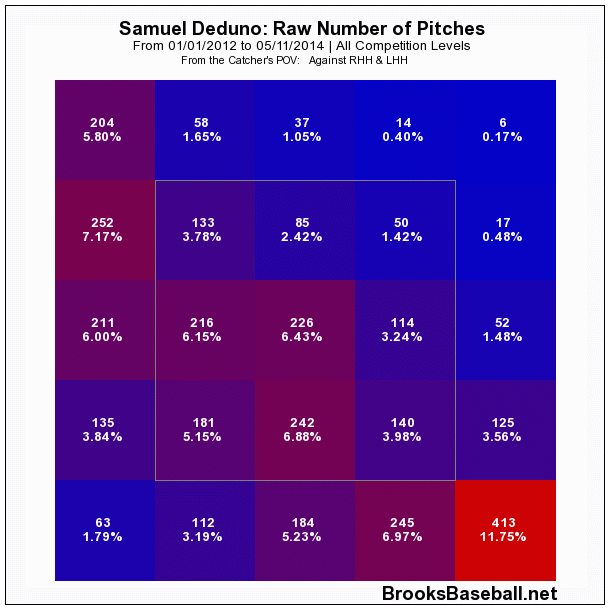 I broke down Robbie Ray's first start in depth last week, illustrating that he did a good job of commanding his fastball against the  Houston Astros. He will need to do a lot of the same today against the Twins, who lead the majors in walk rate and swing at just 24.7% of pitches outside the strike zone, the third-lowest rate in baseball. If Ray keeps the ball in the strike zone, the numbers are on his side. The Twins swing at the lowest percentage of pitches within the zone of any team in baseball, and they are below average at making contact when they do swing at those pitches. The real key is strike one: after an 0-1 count, the Twins are hitting just .201/.266/.284, well below the league average .605 OPS in such situations.

The Twins have obviously never faced Ray, so let's talk about Deduno's numbers against the Tigers. Don Kelly and Austin Jackson have had the most success against Deduno and are the only two Tigers to have homered off him. Kelly has also doubled off Deduno, and only needs a triple today to complete the career cycle. Other than that, things have not gone well against the Dominican right-hander. Miguel Cabrera is 2-for-10, Alex Avila is 1-for-10 with four strikeouts, and Victor Martinez is 0-for-6.

Something is going to have to give today when the Tigers are at the plate. As a team, they are hitting just .221/.280/.315 against groundball specialists and .268/.321/.413 against right-handed starters. They also have the third-lowest walk rate in the American League. However, Deduno has allowed 18 earned runs and an .887 OPS in 21 2/3 career innings against the Tigers. Meanwhile, the Twins are hitting just .233/.321/.340 against left-handed pitching this season, but Ray is still a 22 year old making his second career start. If his command problems return, things could get ugly.

Ray gets a no-decision today but the Tigers win their fourth consecutive season.