Tech-tips: how to sync your MLB audio with your television feed

Want to watch the game on TV, but also listen to it on the radio? Here's how to get everything synchronized.

Share All sharing options for: Tech-tips: how to sync your MLB audio with your television feed

It was a Sunday in late June and I was all of seven years old when I first discovered the magic: I could turn down the sound on the Tigers game on television, turn up the radio in the living room, and just like that, I could watch the game while still listening to Ernie Harwell and Paul Carey. No offense to George Kell and Al Kaline in the WDIV broadcast booth, but Ernie and Paul were my friends every night of the week, and I wanted to hear them on Sundays as well, even though the game was on TV.

These days, it's not quite so simple, what with the various delay times on audio and video feeds. Today, if I mute the television and turn up the radio, the audio feed is about seven to ten seconds ahead of the video feed, and that makes for a mentally jarring experience. It's a little more than frustrating, especially on those days when the Tigers are being broadcast nationally and watching the game on TV means getting stuck with two broadcasters who a) I don't know and b) don't know the Tigers. The problem is especially pronounced during the playoffs.

Thankfully, there are still ways of getting the job done, and you can still sync up Dan Dickerson and Jim Price to the television, if you're willing to invest a little time and perhaps a few extra dollars. Here's how I did it ...

It's a free program that will take whatever audio feed you select, and delay it by however many seconds you choose. You can find the app here.

Step Two: Connect your radio to your computer

This may or may not work for you. If it does, thank your lucky stars, because you're getting out of here without having to spend any money.

1. Get a standard audio cable. The one you use to connect your iPod to your car will work just fine

2. Connect one end of the audio cable to your radio's headphone output jack

3. Connect the other end of the audio cable to your computer's "line in" (or microphone) input jack

4. Test to make sure that the sound from your radio is now coming through your computer speakers

As I mentioned, this method didn't end up working for me. I think my laptop was just being fussy about using the microphone/line-in jack that way, and it probably would have worked fine on another laptop. If this method worked for you, skip right ahead to step four.

This is an audio driver and app that allows you to transfer sounds between programs. The base cost is $25, and if you want to add support, it's anywhere from $35 to $50.

Note: you don't need this program if you already got your radio to successfully play through your computer's speakers.

2. Fire up your MLB.TV audio

3. Right-click on the speaker icon in your system tray and click "Playback devices"

4. You should see the Virtual Audio Cable listed as an option: 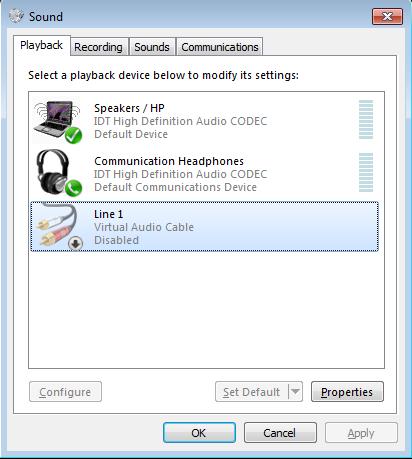 5. Right-click on the Virtual Audio Cable and select "Enable"

6. Your MLB.TV audio stream should now be going through the Virtual Audio Cable

By now, whether you used step two or step three above, you should have your game audio running through your computer, so now it's time to delay the audio feed and make it sync up to the video feed on TV. 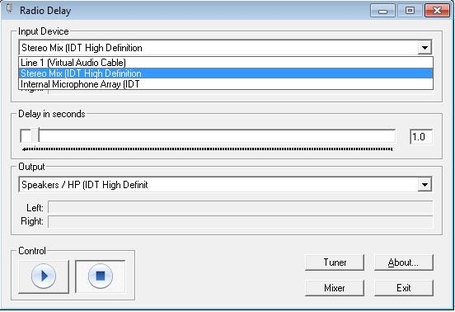 3. Under "Delay in seconds" either use the slider control, or use the input box, to set the delay time - I usually start with around five seconds and tweak it from there

4. Under "Control", hit the play button

5. You should now be hearing the audio feed, delayed by however many seconds you specified