The Detroit Tigers kicked off their road trip with three games against the Baltimore Orioles, both teams at the top of their respective divisions. There was plenty of fireworks between the first place teams in game one, as the benches emptied late in a 4-1 Tigers' victory.

Detroit starter Rick Porcello earned his team-leading sixth win, second in the AL behind Mark Buehrle's seven. Porcello shut down the Orioles on five hits over six innings, striking out two while not walking a batter. He was pulled after 83 pitches due to what manager Brad Ausmus termed tightness in his side. It's not expected Porcello will miss any time.

The Tigers' bullpen was up to the task, Ian Krol and Al Alburquerque each tossing a scoreless inning in setup duty. Joe Nathan pitched a hitless ninth to record his eighth save.

The game fell apart for Orioles' starter Bud Norris in the seventh, serving up a two out home run to Kinsler, giving the Tigers a pair of insurance ruins. Norris was ejected after 7 2/3 innings, allowing four runs on just five hits, striking out seven.

The Tigers were out-hit 6-to-5, but made what offense they had count. Miguel Cabrera drive in his team leading 30th RBI, Victor Martinez add two hits to raise his average to .331. But it was Kinsler who was the offensive star for the Tigers. He reached base three times on a walk and two hits, including a game-clinching two run homer (number four on the season), scored two runs and stole a base.

Pressed into action thanks to starting catcher Matt Weiters being placed on the 15-day DL, backup Steve Clevenger was the Orioles' offense. He ha going into d three hits, two for extra bases and drove in the O's only run.

The benches cleared the eighth when Norris drilled Torii Hunter in the ribs after an Ian Kinsler home run. Emotions ran high, but there were no fights during the altercation. Norris was ejected for his actions.

Post game, the talk was all about the Hunter - Norris confrontation.

Asumus wasn't sure if Norris hit Hunter purposely, but the situation wasn't in the Orioles' favor.

"I'm not saying he hit him on purpose, but it didn't look copacetic."

Hunter was vocal about being hit by Norris.

"They're picking on the wrong guy, that's all."

"Picking on the old guy. Really? I probably have more hits than he has days in his life."

Norris took offense to what he thought was a too quick ejection.

"It’s kind of a weird time. Because he says something I’m immediately tossed?"

But Ausmus doesn't expect the eighth inning dramatics to carry over to tomorrow's game.

"This is baseball. The players know you forget about yesterday and move on."

Another day, another pitcher's duel? The game was on the duel track from the get go.

Two down in the second, J.J. Hardy singled. Steve Clevenger followed with a fly ball to deep left which a better outfielder may have caught. Rajai Davis is not a better outfielder. The ball dropped on the warning track for a two base hit, Hardy scoring all the way from first to give the O's a 1-0 lead. (Get well soon, Andy Dirks!)

Andrew Romine extended the inning when he backed up on Delmon Young's high chopper, then uncorked a Delmon Young-esque throw to pull Miguel Cabrera off the bag. Everyone was safe on the E-6, runners now on the corners.

Tried of seeing the ball being kicked around, Porcello and Cabrera combined to make a nice inning ending play. Cabrera had to go get Jonathan Schoop's swinging bunt, Porcello sprinting to first to take the toss and find the bag with his foot to nip the runner for the final out.

I haven’t seen footwork like that from Porcello since I made this GIF last year http://t.co/dpwKcsBGXr

While Porcello was struggling with the defense behind him, the Tigers' offense was struggling even more against Norris. Through three innings, Norris had struck out four (consecutively) and had yet to allow a hit.

Top of four, Ian Kinsler decided to take it upon himself to kick start the Tigers' offense. He drew a lead off walk, stole second for his fifth stolen base of the season, then advanced to third on Torii Hunter's liner to right.

Cabrera ended all no-hit and shutout talk with an RBI single to center, tying the game at 1-all (MLB.com video). Norris having far more trouble the second time through the order, Victor Martinez feasted on a 94 MPH fastball over the middle if the plate, driving it over the head of Adam Jones in center.

Victor! Martinez’s 1,000th hit in the last week gives the Tigers runners at 2nd and 3rd

Jackson's drive to center was caught by Jones, but it was more than deep enough to plate Cabrera. Jackson's fifth sacrifice fly of the season gave the Tigers their first lead of the game at 2-1 (MLB.com video).

Both starters having had their rough inning, they settled back into a groove.

Porcello did what he needed to do, tossing a pair of shut down innings after being given a lead. Through five, the Tigers were up one, Porcello scattering five hits while striking out one and retiring seven via ground balls.

The Tigers had gone down in order in four of the first five innings against Norris, who had allowed just two hits, striking out five.

The duel between Norris and Porcello reached the sixth, then the seventh, the score still 2-1 Detroit. Porcello and Norris could not have had more similar nights to that point, their pitch counts at 83 and 81 respectively. The difference in the game being the Martinez double which set up Jackson's sacrifice fly.

Top of seven, the Tigers looked to have a two out threat, but Clevenger earned an Oscar with his acting job in drawing an inning ending obstruction call on Nick Castellanos while Jackson was on his way to swiping second. 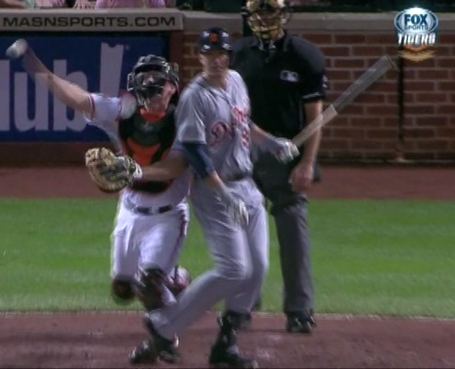 Mario Impemba: "The equivalent of taking a charge..."

Porcello's excellent night was over prematurely, just six innings and 83 pitches. Post game, it was reported it was a precautionary move due to side tightness. Porcello was replaced by Ian Krol, who immediately served up a lead off double (his third hit of the game) to the O's method actor, Clevenger.

With one out, Castellanos ended up saving a run with a marvelous bare handed play to throw out Schoop on a slow roller. Clevenger took third on the play. Nick Markakis followed with a liner to deep center. Thanks to Castellanos, the line drive was the final out of the inning, instead of a game-tying sacrifice fly.

Top of eight, Norris' pitch count was pushing 100, but he remained on the mound. The Tigers in need of base runners, Norris gave them a freebie by walking Avila. But Romine took a liking to chin-high fastballs, popping one up for the first out. Davis' week-long slump continued with a can of corn to right.

Two out and Avila still on first, Norris still had to face Kinsler to get out of the inning. He tried to throw a shoulder-high fastball past him.

Kinsler tomahawked the pitch, getting just enough of it to clear the left field wall at the 333 foot mark. His second home run in as many games was Kinsler's fourth of the season, extending the Tigers' lead to 4-1 (MLB.com video).

Then all Hell broke loose. Well, that is if you call Torii Hunter yelling profanities and 50 players milling around on the infield "Hell."

Bases empty and the Tigers now up by three, Norris drilled Hunter in the ribs with a fastball. It appeared to be an obvious purpose pitch, being it came immediately after Kinsler's game-breaking home run. Hunter obviously took exception, yelling various expletives at Norris, resulting in this: 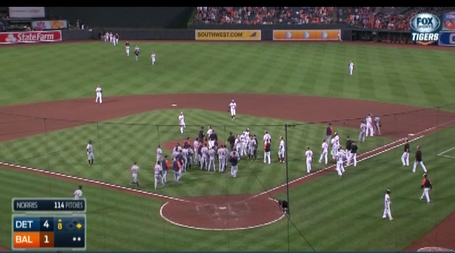 When the not fighting and yelling had stopped, the umpires had agreed with Hunter because Norris was ejected. Hunter took first while ticked off O's fans showed their displeasure.

Jobe Chamberlain having pitched a stressful inning Sunday, Al Alburquerque got setup duty tonight. The slider was working its magic, the mercurial Alburquerque striking out a pair in a 1-2-3 inning.

bottom of nine, Jope Nathan was looking for save number eight and drama free ninth. Vintage got both, Nathan, needing a mere six pitches to retire the side in order.

The Tigers kick off a nine games in ten days road trip with a nice win.

Jimenez made the Tribe look smart for allowing him to walk as a free agent thanks to his brutal 0-4, 6.59 ERA in five April starts. He's been a different pitcher in May, winning both of his starts while posting a miniscule 0.71 ERA (1 ER, 12 2/3 IP).

As a starter, Smyly is 1-2 with a 3.80 ERA. He was the pitcher of record when the Tigers' eight game winning streak came to an end, allowing three runs in 5 5 1/3 innings, unable to get out of the sixth inning in a 6-2 loss to the Astros.

The Weather Gods are still toying with the Tigers. Tonight's game was delayed approximately 35 minutes due to rain. Mother Nature pulls a Nelson Muntz, says to the Tigers...

Meanwhile in New York, the Yankees are wearing complete and utter abominations on their heads.

Anyone have any idea what the Dartmouth Man is up to here? Ausmus being Bossmus? 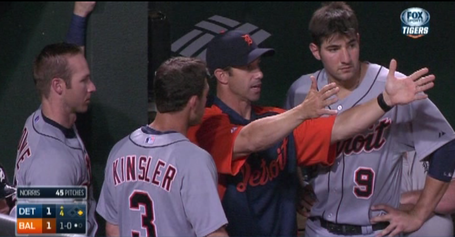 In the toip of the the sixth, there was a meeting of the minds in regard to the health of Rick Porcello. He turned out to be fine, tossing a 1-2-3 bottom of the inning. Gene Lamont apparently knew Kid Rick was OK all along, preferring to hang by the rail and enjoy the game. 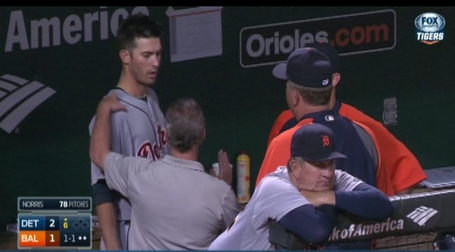 We got to witness more Aumus arm extension in the seventh. He was likely describing the length of umpire credibility after the silly obstruction call. 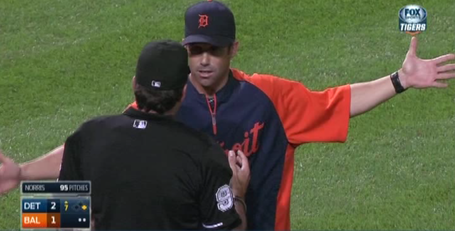 You know things just got serious when the normally happy-go-lucky Torii Hunter is PISSED. He was ready to open a can of whup ass. As for the odd looking pat on the face from the umpire, Hunter had no issues with it.

We got your streaks right here!

Rick Porcello: Six innings, one run, five hits, two strikeouts and no walks. In his last three starts, Porcello has a 2.34 ERA with 13 strikeouts and only two walks.

Al Alburquerque: Asked to pitch in the eighth inning setup role, Alburquerque was lights out.

Joe Nathan: Saves don't get much more drama-free than a six pitch, 1-2-3 ninth.

Miguel Cabrera and Victor Martinez: Cabrera drove in his team leading 30th RBI, Martinez had two more hits and set the table for the eventual game winning run with a double.

Nick Castellanos' defense: He made a nice play to throw out Adam Jones from deep behind third in the first inning, then ultimately saved a run with his bare hand grab and throw of Jonathan Schoop's roller in the seventh.

Rajai Davis: A brutal slump continued with an 0-for-3 night. He's now 2-for-19 in his last six games.  Davis, fast as he is, has not been able to outrun the regression monster. He entered the game hitting .222/.250/.296 in May and his defensive shortcomings are becoming exposed the more he plays.

Andrew Romine: Committed an error and had some brutal at bats. Romine has been as bad as advertised offensively, now "hitting" .215/.301/.231

GAME 33 PLAYER OF THE GAME:

No PotG poll was posted yesterday, so lets go with Robbie Ray and his six shutout innings. Via Tigers PR, Ray became the fourth Tigers' starting pitcher since the dead ball era of 1914 to throw at least six shutout innings and allow four or less hits in one of his first two career starts.