AL ERA leader Max Scherzer takes the mound this afternoon for the Tigers. He will face Indians righty Zach McAllister.

Share All sharing options for: Game 42 Preview: Tigers at Indians

Zach McAllister pitched well through his first seven starts this season, allowing a 3.18 ERA and a 2.57 FIP in 39 2/3 innings. This included a win over the Tigers in which McAllister gave up one run in six innings of work. He was particularly stingy at Progressive Field, with a 0.89 ERA in his first three home starts.

However, the wheels have come off in McAllister's last two starts, ballooning his ERA to 5.36. He has given up 13 runs in his last 5 2/3 innings, including a pair of home runs in his last start against the Oakland Athletics. McAllister only recorded four outs in that game, a surprising exit considering he struck out the side in order in the first inning. He was unable to command any of his pitches and gave up several rockets in the top of the second, resulting in eight runs on five hits and three walks.

Part of the reason McAllister has struggled lately is two-fold: (a) he tends to leave the ball out over the plate, and (b) he doesn't have the stuff to get away with that. According to PitchFX, McAllister has hit the strike zone with 58% of his pitches this season, an unhealthy number considering he only generates whiffs at a 6.6% clip. Opposing batters make contact on pitches inside the zone 89.4% of the time, well above the league average of 86.9%. Considering where McAllister has lived within the strike zone, these numbers are no surprise. 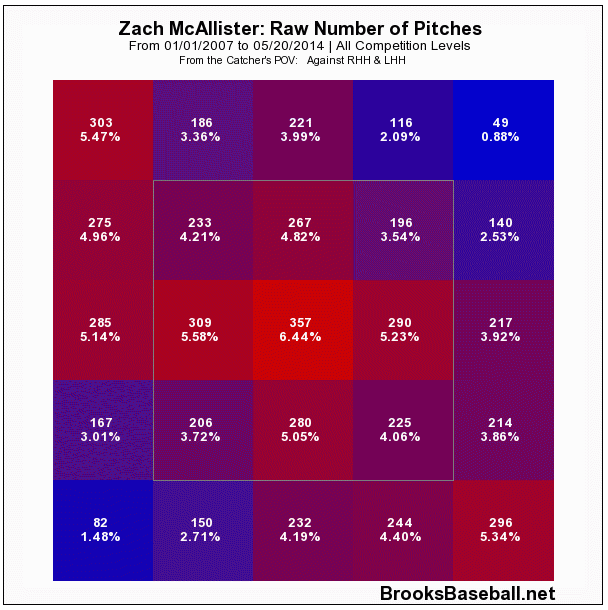 Meanwhile, opposing batters make contact on just 82.4% of Max Scherzer's pitches within the strike zone. Scherzer has not lived within the strike zone quite as much as McAllister this year, but his ability to generate swings and misses at a 12.5% would give him a better chance of avoiding outings like McAllister's last Friday. Instead, Scherzer's ability to get hitters to chase has led to an AL-best 31.5% strikeout rate and a .593 OPS against that ranks fifth in the league. He will have to improve his command, however. He has allowed four walks in consecutive starts, and the Indians rank fourth in baseball with a 9.9% team walk rate (Minnesota and Boston are second and third, for what it's worth).

Nick Swisher is one of two Indians hitters with an OPS above .800 against Scherzer, the other being Michael Brantley (naturally). Swisher has a trio of extra base hits and four walks in 26 plate appearances, but has yet to homer off the reigning Cy Young champion. The only Indians to have gone yard off Scherzer are Brantley and Asdrubal Cabrera, who has a modest .764 OPS in 41 plate appearances. Cabrera also has 13 strikeouts to go along with that homer. Carlos Santana and Michael Bourn have struggled against Scherzer, going a combined 7-for-48 with one extra base hit.

Like Justin Verlander yesterday, Max Scherzer has also struggled at Progressive Field in his career. He is just 3-3 with a 4.44 ERA and a 1.92 strikeout-to-walk ratio in eight starts at Cleveland. He has been fairly efficient, however, averaging 6 1/3 innings per start. Meanwhile, McAllister has pitched well against the Tigers despite a 4.29 ERA in seven starts. The Tigers scored 11 runs (10 earned) in a combined six innings in two separate meetings last season, but have otherwise been shut down whenever McAllister takes the mound. However, he has never pitched more than 6 1/3 innings against the Tigers, meaning that the Tribe bullpen will have to work multiple innings in order to shut the door for a third consecutive day if they are handed a lead.

Scherzer helps the Tigers avoid a sweep with a solid outing.