Share All sharing options for: Game 43 Preview: Rangers at Tigers

It probably should not surprise anyone that Yu Darvish is dominating the American League yet again, but he's not just dominating: he's improving. Darvish has maintained the gaudy strikeout rate he posted in both 2012 and 2013, but has cut his walk rate down to 7.2% this year. This has resulted in a 4.06 strikeout-to-walk ratio and a career-best 2.40 FIP. Part of Darvish's dominance stems from his incredibly deep arsenal. I mean, when your Brooks Baseball page looks like this -- for just 2014! -- you have a few tricks up your sleeve. 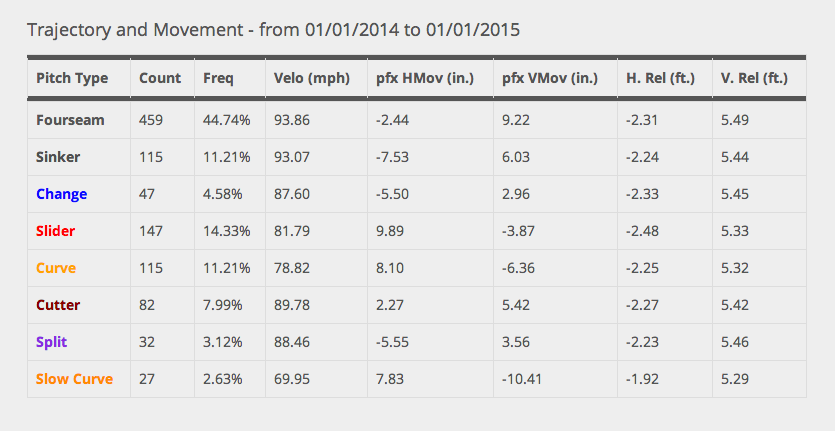 There are a couple of concerning trends, however. Darvish is generating whiffs at a 9.8% rate, down from the superhuman 12.6% clip he put up in 2013. Opposing hitters are making more contact with pitches outside of the strike zone. His ground ball rate has dipped to a career-low 35.3% and his home run rate is unsustainably low -- though his xFIP is still just 3.17. Overall, these are just minor quibbles. Darvish will be in the AL Cy Young conversation again this season and is a good bet to win his second consecutive strikeout title.

Fans who wanted to see Robbie Ray come out of the bullpen got their wish Sunday night... but only briefly. Ray faced three batters in a tune-up outing, logging a strikeout of Red Sox catcher A.J. Pierzynski. He has made life tough on the few lefties he faced during his first two big league starts as well, allowing just a pair of singles. Ray has lived dangerously at times, but has limited opposing batters to just one hit in eight at-bats with runners in scoring position. His 91.7% strand rate is not sustainable over a full season's worth of starts, and the Rangers have hit lefties well this year. 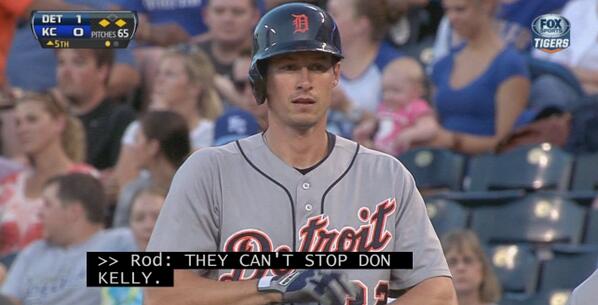 Ray has pitched well in his first two starts, but winning today -- why is this a day game? -- would take the cake. Darvish has dominated the Tigers in his brief career, winning all four starts while holding the Tigers to a 3.86 ERA and .628 OPS. The Tigers got to him somewhat in their only meeting in 2013, scoring four runs on six hits in three-plus innings. Of course, he went on to hold the Tigers to just one more hit in the next five innings, earning the 'W' in a 10-4 Rangers win. Long story short: even though they are at home, the Tigers are trying to steal one today.