Share All sharing options for: Game 44 Preview: Rangers at Tigers

After spending seven years in the Minnesota Twins' organization, Scott Baker went through a lengthy rehabilitation from Tommy John surgery. He missed all of the 2012 season and did not make his first minor league rehab start until July 14th, 2013. He finally got back to the majors in September, where he made three starts for the Chicago Cubs. He signed with the Seattle Mariners before Spring Training this year, but was released after he allowed 12 runs (nine earned) in 12 innings. He signed with the Rangers a few days later, but did not make his 2014 major league debut until May 7th, when he allowed two runs in 5 1/3 innings in relief against the Colorado Rockies.

It's tough to judge Baker's numbers considering he has only made a handful of starts since his surgery, but he pitched well at Triple A prior to his call-up. In six starts, Baker was 4-1 with a 3.32 ERA and 30 strikeouts to 11 walks for the Round Rock Express of the Pacific Coast League. While his walk rate in that small sample is fairly low, it still is not to the standard that Baker set with the Twins from 2005 to 2011. During that stretch, he allowed just 2.1 walks per nine innings. A modest strikeout rate led to a 3.41 strikeout-to-walk ratio, one of the best in baseball in those years.

Baker's fastball velocity still has not returned since his surgery, and it remains to be seen whether he will ever get it back. His fastball sat at 89-90 miles per hour during his lone outing in 2014, down from the 91-92 miles per hour he averaged with the Twins. His slider and changeup have also lost a tick of velocity, so he maintains a 10 mile per hour difference between them and the fastball. He has abandoned his curveball, instead choosing to throw the slider more often to both righties and lefties.

Anibal Sanchez was thrown into a fairly difficult situation in his first start off the disabled list. The Boston Red Sox have not hit like their 2013 counterparts, but they still make life tough for opposing pitchers. Sanchez held the Sox to two runs (one earned) on five hits in five innings. He struck out three batters and walked three, but was around the strike zone all night long. 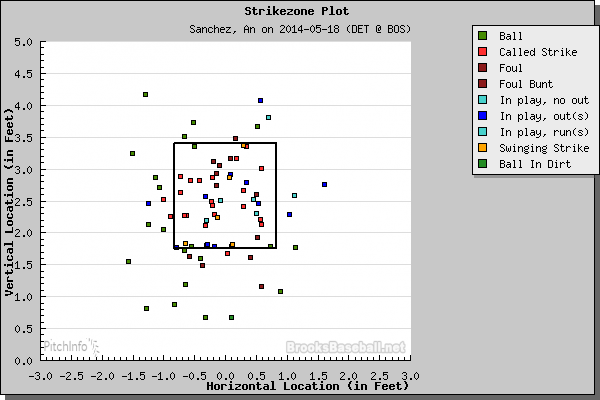 In particular, Sanchez's efficiency was encouraging. He only threw 80 pitches, and the Red Sox rank second in the American League in pitches seen per plate appearance. If Sanchez were not limited by a (necessary) pitch count -- hush, Patrick -- he could have pitched another couple innings. The Tigers will need him to be efficient again tonight, as the bullpen is reeling from a busy week.

Shin-Soo Choo and Elvis Andrus both have an OPS of .800 or better in double digit plate appearances against Sanchez, but Adrian Beltre's 4-for-5 performance is a frightening trend. That said, only two of those hits have come with Sanchez in a Tigers uniform. The only other Rangers player with more than 10 plate appearances against Sanchez is Prince Fielder, who is 1-for-17 with four strikeouts. Unfortunately, Fielder will not be facing any more live pitching this season. Alex Rios is the only current Ranger without a hit against Sanchez (other than the guys who have not faced him, obviously).

If the Tigers were trying to steal a game based on yesterday's pitching matchup, then tonight is the Rangers' turn to play the underdog. Sanchez showed no ill effects of the finger blister that shelved him for three weeks in his last start, holding the Boston Red Sox to two runs in five innings. Meanwhile, Baker is making just his fourth start since the 2011 season, and doesn't seem to be the pitcher he once was. The Tigers still maintain a comfortable lead in the AL Central, but a decisive win tonight over an injury-riddled ball club -- the better question in their clubhouse is "who's not injured?" -- would put minds at ease all around the Tigers organization.

The Tigers get back on track on both sides of the ball and snap their losing streak.