The Tigers hope to get off to a fresh start out west after a 1-6 record last week. First up is a four-game series with the Oakland A's.

Share All sharing options for: Game 47 Preview: Tigers at Athletics

Talk about a lack of offensive support. The A's offense put up just one hit in Tommy Milone's last start. However, that hit was a home run off the bat of Brandon Moss, and they added a pair of unearned runs to give Milone a 3-2 victory, his second win of the year. Milone has been excellent recently, holding his last three opponents to just three combined runs in 19 2/3 innings. Of course, this came after a rough start to the year that saw his ERA climb to 5.86 in early May. His peripheral numbers aren't great -- strikeouts are down and walks are up compared to his career norms -- but he has never been one to blow hitters away.

The term "crafty lefty" fits Milone to a tee. His fastball tops out at 89-90 miles per hour and sits slightly lower than that. He has been throwing a two-seam fastball more often in 2014, but has not seen his overall ground ball rate increase. Opposing batters are pounding that pitch into the ground, resulting in a much lower ISO than his four-seam fastball. It's early, but it could be part of the reason why Milone is currently posting the lowest home run rate of his career. He is also throwing his curveball more often, especially to right-handed hitters. He has always had some mild reverse platoon splits, but is holding righties to hitting just .227/.310/.376 this season.

While the Tigers' starting rotation had an awful week as a whole, Drew Smyly's previous start was actually somewhat encouraging. He did not have his best stuff -- resulting in a career high five walks -- but was able to battle through five innings while allowing just three runs. It was a decent outing for a fifth starter, even if it was below Smyly's usual standards. He had trouble locating everything and worked behind in the count to most batters after throwing just 12 of 27 first-pitch strikes. He still struck out six, however, and generated nine whiffs on 110 pitches. 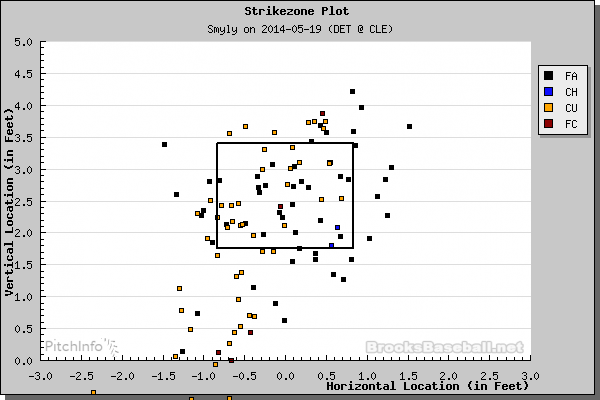 Smyly has never started a game against the A's, but has been beat up in three relief appearances. Overall, the A's are hitting .455/.538/1.000 against him, though in a limited sample of 13 plate appearances. The lone home run belongs to Brandon Moss, who hit a three run bomb off Smyly in a 14-4 A's rout last August. Josh Donaldson, Jed Lowrie, and Alberto Callaspo have all doubled off Smyly, though it's worth noting that Callaspo is the only one that has faced Smyly enough to log a second career hit off him. Smyly isn't likely to see John Jaso in today's lineup, as the A's have leveraged their lineups to gain the platoon advantage in 70 percent of plate appearances this season.

Milone has had success against the Tigers in his young career, holding them to a 3.24 ERA in three career starts. He has not been very efficient this year, however, and the A's bullpen is more vulnerable than the overall numbers let on. The A's have hit Smyly well in a few relief opportunities, but are hitting just .238/.321/.377 against left-handed pitchers this season. Their .738 OPS against left-handed starters is much better, and Smyly's platoon splits will once again be problematic against a righty-heavy lineup. The offense and bullpen may have to carry this one for the Tigers, a daunting task if Miguel Cabrera is not healthy enough to play.