Aces clash tonight as Max Scherzer and Sonny Gray take the mound in a late night showdown between the Tigers and A's.

Share All sharing options for: Game 48 Preview: Tigers at Athletics

Tigers fans got a first-hand look at A's top prospect Sonny Gray last October, when he out-dueled Justin Verlander in Game 2 of the ALDS. Gray tossed eight shutout innings, striking out nine with just two walks. He was far less effective five days later, allowing three runs on six hits in five innings in the Tigers' Game 5 victory. Baseball fans that did not get a chance to see Gray perform in prime time last year have gotten a longer look at more of the same in 2014. He leads the American League with a 1.99 ERA and is averaging nearly seven innings per start. His strikeout rate has dipped from the batter-per-inning clip he had in 64 innings last season, but a 57.3% ground ball rate and minuscule home run rate have helped keep opponents off the scoreboard.

Gray primarily utilizes a power fastball-curveball combination, but has started to mix in his changeup more often in 2014. He uses the changeup more often against left-handed hitters, but it is still a work in progress. Lefties are hitting .308 off that pitch, but an unsustainable 85% ground ball rate on changeups has led to them slugging just .385. His curveball is his swing-and-miss pitch, though teams are not whiffing as often this season. His fastball rests in the mid 90s and induces a ton of weak contact, a big reason why Gray's BABIP is a scant .246 so far this year.

Not even the reigning Cy Young winner was immune from the rotation's woes last week. Max Scherzer gave up seven runs on 12 hits against the Cleveland Indians, but was somehow able to last seven innings in a wild 11-10 loss. While the Indians were unable to drive up his pitch count, they only struck out five times against Scherzer, a season low. Despite the runs allowed, Scherzer seemed to get back on track after a pair of four-walk outings. He threw 21 of 34 first-pitch strikes and 77 strikes in 113 pitches overall. He left a few too many pitches out over the plate early on, but only allowed four hits in his final five innings of work. 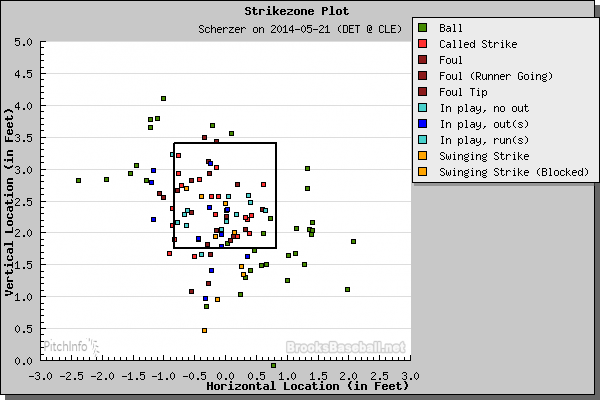 Yoenis Cespedes has owned Scherzer in the postseason, combining for four hits -- a single, double, triple, and that "don't throw him a fastball" home run -- in six at-bats. The regular season has been a different story, if only because of a lack of opportunity. He is 0-for-2 with two walks and a strikeout in a pair of mid-season matchups. Brandon Moss has also hit well against Scherzer, socking a home run and drawing three walks in 19 plate appearances. He has struck out seven times, however. Only Josh Reddick -- who has fanned eight times in 14 plate appearances -- has been set down swinging more often. Josh Donaldson's lone hit in 12 plate appearances was a triple.

If there is a matchup to get the starting rotation back on track, it is Scherzer against the A's. He owns a career 4.20 ERA against the two-time AL West champs, but has struck out 72 batters in just 44 1/3 career innings, including the playoffs. The Tigers need him to be at his best with Gray on the mound, though the young star hasn't been quite as sharp at home this season. Whether or not the offense gets off the ground, a solid starting performance from Scherzer would go a long way to ease any concerns that have arisen about this team over the past week. Of course, a win would be nice too.

Scherzer and the Tigers right the ship with a hard-fought win.