Drew Smyly will look to rebound from a disastrous start in Oakland tonight against the Mariners. Chris Young will start for Seattle.

Share All sharing options for: Game 52 Preview: Tigers at Mariners

The last several years had to be frustrating for Chris Young, who was a solid mid-rotation starter for the San Diego Padres in the mid-2000s. Things started to fall apart -- literally -- in 2009, when Young had shoulder surgery and missed half the season. From there, he only pitched 44 big league innings in 2010 and 2011 combined before undergoing another shoulder surgery. He put up a 92 ERA+ for the New York Mets in 115 innings in 2012, but spent all of 2013 in the Washington Nationals' farm system. He re-signed with the Nationals this year, but was released at the end of Spring Training.

From there, the Mariners swooped in and picked up Young to bolster their rotation depth. At the time, the move was well received because of injuries to Hisashi Iwakuma and Taijuan Walker. Young's performance thus far has only made it look better. While his peripheral numbers suggest that regression is one Miguel Cabrera at-bat away, Young has allowed a 3.30 ERA in 57 1/3 innings to start the year. He has five starts with two earned runs or fewer allowed, and has pitched into the seventh inning in all five of his starts this month. Despite a fastball that tops out at 88 miles per hour, Young has fearlessly pitched up in the strike zone, generating enough weak contact to support a .192 BABIP. Fangraphs has an excellent piece up on Young's fastball location, and why he has gotten away with the high heat.

"Working vertically is just as important as working horizontally," Young said. "Being able to locate the fastball gives you four different pitches: down and away, up and away, down and in and up and in." Up and in, in particular, is a great spot to hit, it looks like. And since Young also thinks generalities are less important than the particulars of each batter, it’s interesting to return to those specific charts above and remember not all hitters can turn a high fastball into a home run.

Unlike Young, Drew Smyly was unable to get away with any high fastballs in his last start. The Oakland Athletics battered him for six runs on eight hits, including four home runs, in five innings. While he did not walk as many hitters as he did in Cleveland, his command was no better. 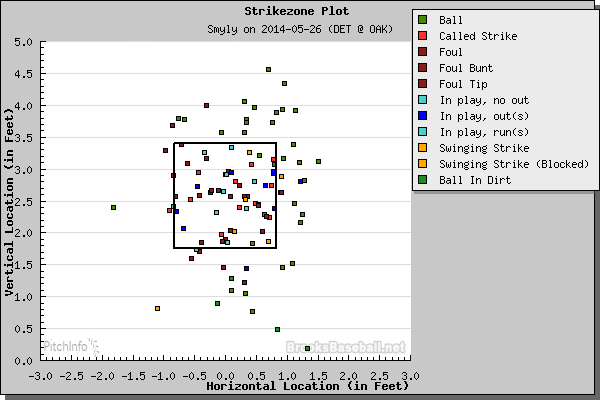 There are a lot of pitches right down the middle of the plate there, so it's no surprise Smyly was hit around. He didn't miss many bats either, generating just seven whiffs in 107 pitches. Granted, the A's have one of the lowest whiff rates in baseball as a team, but Smyly's season-long rate is 9.1%. Luckily for him and the Tigers, the Mariners hit just .242/.299/.352 against left-handers, and their .665 OPS against lefty starters isn't much better.

Of all the small samples I have looked at for Smyly this season, his track record against the Mariners might take the cake. Kyle Seager, Robinson Cano, and Justin Smoak are the only three M's hitters to have more than one plate appearance against Smyly. Seager and Smoak are the only ones with hits, a double and single, respectively. Dustin Ackley and Nick Franklin are both 0-for-1. Things aren't much better on the other side, though Torii Hunter has homered off Young before.

I'm just going to pretend that the Tigers were as interested in taking a long Memorial Day weekend off from work as I was, because they have been pretty good ever since. The rotation has rebounded somewhat -- though Rick Porcello's six walks were weird -- and the offense has put up five runs in every game not involving Scott Kazmir. A split in Oakland is impressive considering the A's have the highest winning percentage in baseball over the past two calendar years, and the Tigers pounded a very good starter in Iwakuma last night. Tonight, Smyly is in a great position to bounce back from a pair of rocky outings. The Mariners roster is chock full of left-handed hitters, and Safeco Field is still very pitcher-friendly despite last night's barrage of home runs.

Smyly rebounds and the Tigers clinch a winning record on their road trip.