An extremely effective Justin Verlander rediscovered his fastball in 7 2/3 innings of work, riding home runs from Miguel Cabrera, Victor Martinez and Rajai Davis to a win over the Mariners.

The Detroit Tigers and Justin Verlander rode home runs off the bats of Miguel Cabrera, Victor Martinez and Rajai Davis to a 6-3 win over the Seattle Mariners. With a winning streak of two, Detroit has won consecutive games for the first time since sweeping the Red Sox nearly two weeks ago.

Verlander (W, 6-4) won his first game in two weeks, bouncing back from a rough three-start stretch which included his worst appearance of the season. The veteran right-hander allowed three runs on five hits, striking out seven and walking  just one, pitching into the eighth for the first time since April 6. Seemingly on a mission to show he had not lost velocity on his fastball, Verlander was hitting 98 MPH on the radar as late as the sixth inning.

A struggling Joe Nathan was given the night off for Detroit. Joba Chamberlain pitched the ninth to record his second save.

Hisashi Iwakuma (L, 3-2) lost his second straight game, rocked for five runs and eight hits, striking out five and walking two in six innings. All five runs Iwakuma served up were via the home run.

Ex-Tiger Charlie Furbush was dinged for the sixth run, giving up the Tigers' third home run of the night.

The Mariners were out-hit by the Tigers 9-6, and out-homered 3-1. All the Tigers' offense came via the home run - Cabrera started the scoring on a two-run shot in the fourth, Martinez added a three-run homer in the fifth and Davis closed out the Tigers' scoring with a solo drive in the seventh.

Kyle Seager's bat supplied all the Mariners' offense with a two-run homer in the fifth.

Can everyone please unclench whatever they've clenched over the past two weeks?

Top of one and two down, singles by Miguel Cabrera and Victor Martinez gave the Tigers a scoring opportunity. For some reason, only God knows why, Hisashi Iwakuma tried to pick off Cabrera. The attempt sailed into center field, Cabrera and Martinez advancing 90 feet.

Bottom half of the first, Justin Verlander allowed a one-out single to James Jones. He would swipe second, but Verlander, who was hitting mid-90s on the radar, retired the next two batters to strand the runner.

Nick Castellanos ran the Tigers out of a scoring opportunity in the second. First, the good -- Castellanos lined a one-out double into the left field corner.

Castellanos doubles - he hasn't been around long enough to know that Iwakuma is hard to hit.

Then, the bad -- he tried to advance on a pitch in the dirt which remained by the plate. The rookie mistake resulted in an easy TOOTBLAN, catcher Mike Zunino nailing Castellanos at third.

The Tigers really need to see about getting a ghost runner for Nick in the future.

Kyle Seager led off the bottom of the second with a hard-hit double into the right center field gap. He advanced to third on Zunino's swinging bunt.

Even though it was only the second inning, Brad Ausmus ordered the infield pulled in. The move worked to perfection. Seager was off on contact, but Dustin Ackley's one-hopper was right at Andrew Romine. Seager was a dead Mariner running, Romine's on-target throw nailing him at the plate and nipping a rally in the bud.

The Tigers put a runner on base against Iwakuma for the third straight inning when Torii Hunter bounced a two-out single into center. This time around, the Tigers would capitalize ... on one swing of the bat.

Cabrera jumped all over a first-pitch fastball, depositing it over the left field fence. Cabrera knew it was gone as soon as he swung, taking leave of the batter's box in a leisurely way. Cabrera's ninth home run gave the Tigers a 2-0 lead, raising his RBI total to 48 on the year.

Verlander was cruising along, having retired seven straight, before walking Smoak with one down in the fourth. Seager had smoked a line drive in his previous at against Verlander. The second time around, he hit the ball even harder, sending a fastball deep into the right field stands. It was the eighth homer of the season for Seager, tying the game at 2-all.

Two down, Ian Kinsler on second base and first base open, the ex-Tigers hitting coach and current M's manager elected to walk Cabrera and pitch to Martinez. In a marvelous, bananas, awesome plate appearance, Martinez fouled off five pitches in a ten-pitch at-bat. The tenth pitch from Iwakuma was a low 80's, 2-2 hanger. Martinez turned on it, crushing a line drive into the first row of seats in right for a three-run home run (MLB.com video).

At the same time, Martinez had elevated Iwakuma's pitch count (he ended the fifth at 86) and given the Tigers a 5-2 lead with his 13th home run of 2014.

WOW. Just...WOW. Martinez's great at-bat brought back memories of Dave Bergman in 1984, which will always remain the best at-bat by anyone, ever. (Tip o' the cap to Rogo for finding it)

Bergaman's at-bat was three pitches longer, ending an extra-innings game on national TV. But I digress...

Bottom half of the fifth, Verlander gave up a two-out double to Endy Chavez. He was bailed out of further trouble on an excellent defensive play by Kinsler. He snatched Jones' smoked one-hopper out of the air and made the throw to first, ending the inning and possibly saving a run.

Verlander tossed a 1-2-3 sixth, surprisingly hitting 98 on the radar on his 94th pitch of the night. If Verlander was out to prove he has not lost velocity on his fastball, he was doing a damn fine job of it.

Iwakuma was pulled after six innings, replaced by the last remaining piece of the Doug Fister deal, Charlie Furbush. Rajai Davis took a liking to Furbush's first offering, a 92 MPH meatball, launching it to deep left, a majestic big fly just missing the third deck at Safeco. The third Detroit home run of the night was number four on the season for Davis, increasing the lead to 6-2 (MLB.com video).

Verlander capped off his 7 2/3 innings by retiring 14-of-16. After setting down nine straight Mariners, a two-out single by Jones ended his night. Still, whatever had been wrong in Verlander's previous two starts has been corrected.

Let the second guessing begin, as Ian Krol took over despite there being no signs Verlander was in trouble. There was trouble after Krol entered, allowing the inherited runner to score.

Jones took second on a wild pitch, then scored on Michael Saunders double. The Mariners had pulled within three runs at 6-3 as the game headed into the ninth.

The Tigers were unable to add an insurance run in the ninth against Tom Wilhelmsen, the fourth Mariners' pitcher of the night. Being Joe Nathan was given the night off due to throwing lots and lots of pitches over the last three nights, a three-run lead meant Joba Chamberlain would get the save opportunity.

Chamberlain walked a batter and struck out two while recording an otherwise uneventful save. A nice change of pace after the last two train-wreck ninth innings.

Your final score is Tigers 6, Mariners 3.

Tigers win! What's the thing called when you win more than one game in a row? Stretch? Street? Streek?

If two games is considered a winning streak, I'll take it.

The final late night game of the west coast trip has a first pitch of 10:10 PM at Safeco Field.

This is how Miguel Cabrera pimps a no-doubt home run - with a subtle bat flip. I think Torii Hunter could show him a thing or two about flipping a bat.

In the Safeco stands tonight were Joba Chamberlain's clone and Jim Leyland: 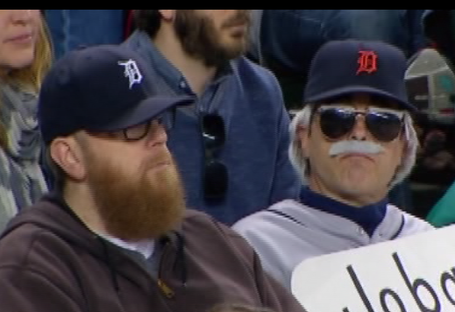 The Tigers' aggressiveness had put them at the top of the charts! Too bad it's the TOOTBLAN chart.

That's the first time the Tigers have scored against Iwakuma since May 7, 2012.

That same big fly was Cabrera's 374th career home run, tied with Rocky Colavito for 72nd in MLB history. It was also his 236th as a Tiger, eighth all-time in franchise history.

Cabrera also has 33 RBIs in the month of May. It's the same RBI total he had last May, tying him for the seventh most in franchise history.

Justin Verlander: A much-needed excellent start for Verlander, who had posted an 8.31 ERA in his last three appearances. He was pulled after 7 2/3 innings and a season-high 120 pitches. Verlander's night would look even better if not for Ian Krol allowing an inherited runner to score.

Victor Martinez: Just another night - Two hits, a run scored, three RBIs and a home run. Fans will be talking about his ten-pitch battle with Iwakuma for the remainder of the season. The at-bat was that good.

Austin Jackson: The only Detroit batter to not reach base, Jackson's month-long slump continued with an 0-for-4 night, dropping his slash stats to 244/.308/.386. Those are numbers you would expect to see from a bottom-of-the-order hitter, not from someone hitting behind Victor Martinez.

Ian Krol: As a lefty out of the bullpen brought in to face a lefty, you're supposed to get left-handers out. You don't give up RBI doubles to them.

West coast baseball: I don't know about you, but I'm more than ready for games which don't end in the middle of the night.

GAME 50 PLAYER OF THE GAME:

Victor Martinez's seventh-inning double gave the Tigers a pair of runs which turned out they would badly need. Two hits and two RBIs pushed Martinez to the top of the PotG ballot with 52% of the vote.